Robbie Farah has played one of the greatest matches of his distinguished NRL career to lead the Wests Tigers to a 50-16 victory over the New Zealand Warriors and give his team hope of avoiding the 2015 wooden spoon.

In a match where departing stars Keith Galloway and Pat Richards were honoured with posters around Campbelltown Sports Stadium, Farah was the one to demand the adulation of the passionate crowd.

He earned three standing ovations in the first half alone, and it was no wonder why, as the local hero had himself a try, two try assists, a linebreak, linebreak assist, four tackle busts and 22 tackles in an amazing 40 minutes of football.

The win was huge for the Tigers for a number of reasons on the back of one of the most tumultuous weeks in the club's history.

The emphatic scoreline has helped them jump from 16th to 13th position on the ladder, giving them some breathing room from the dreaded spoon.

Warrior Albert Vete was first on the board with a brutal, powerhouse effort to burrow under three Tigers defenders and slam the ball on the line.

A scintillating James Tedesco run appeared to bring the Tigers back into it in the 18th minute. However the young Tigers fullback was denied by the video referee for an earlier obstruction.

But they wouldn’t be held back for long as two of the Tigers' departing heroes linked up to put their team on the board.

After a long Tim Simona break, Keith Galloway found himself with the ball near the Warriors line, the big man somehow got an offload away to his skipper before Farah burrowed over from close range.

That was the start of the Farah show as he then turned provider to put a four pointer on for Luke Brooks' with an unbelievable flick pass close to the line.

After finding Curtis Sironen with a nice flat ball at the line, Farah wrapped around to pick up the ensuing offload before taking the selfless option of flicking a lovely pass on to Brooks.

The Farah-loving 6,700 in attendance was in raptures following their man's second highlight play in a matter of minutes. The Campbelltown crowd started a "Robbie" chant that reverberated around the ground.

The show kept rolling on late in the half, this time he put the ball on the foot to set up a far more typical try, dinking a grubber in behind the line for Dene Halatau to pounce.

He walked off the field at half-time tapping the Wests Tigers crest over his heart to his third standing ovation of the match.

And the crowd would be given even more reason to cheer as the Tigers scored again soon after resumption.

Tedesco's smart offload had Simona in space and the Tigers' speedster was never going to be stopped as he angled around Sam Tomkins and showed his blistering speed to breeze past him over the ensuing 40 metres.

Despite the subsequent conversion attempt missing of the boot of Pat Richards, the Tigers had a commanding advantage with just half an hour left, leading 22-6.

The Warriors' afternoon would only reach greater depths as Sam Tomkins was forced off the field with a knee injury soon after.

And then moments later, David Nofoaluma and Kevin Naqaima linked up to get the Tigers across the stripe again, the former tripping through the defensive line before offloading for the latter to race 40 metres away to score.

A Mitch Moses kick found Nofoaluma with space on the sidelines to take the match out to 34-6.

Richards would then do it all as he scored his 50th try for the Tigers, awarded it, and then converted it from the left sideline as the game turned into a celebration.

The Warriors scored twice late in the piece through Matt Allwood, a small consolation for their otherwise poor performance on Sunday afternoon.

Farah somehow managed an amazing offload in the final minutes to send Martin Taupau over and put the cherry on top of a marvellous individual performance.

Naqaima finished off a brilliant movement by the Tigers in the final play of the game to give Keith Galloway a sideline shot at goal in the final home game of his long Tigers career. The conversion attempt landed on the 10 metre line.

Charlie Gubb was placed on report in the 56th and 78th minutes for shoulder charge offences. 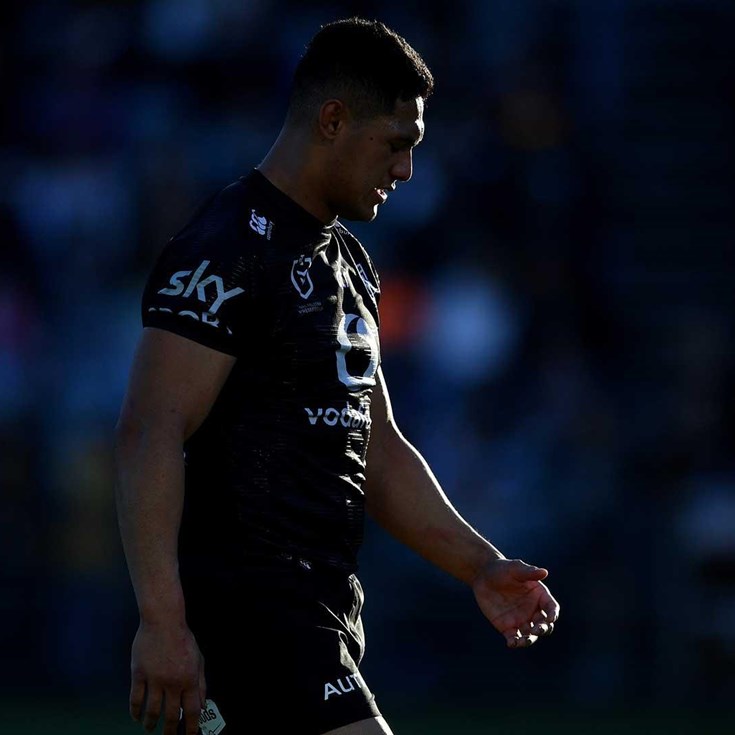 Ikahihifo and Allwood return for Warriors