Melbourne are chasing their first finals win since the 2012 Grand Final but it will be a tough ask on the road against the minor premiers who will take a 12-game winning streak into September.

The Storm are displaying a strong form line in their own right with their last three wins coming against teams that finished inside the top five.

These teams have met twice this year. Cooper Cronk proved the hero with a game-winning field goal for the Storm in Round 7, but the men in purple will have fresh memories of their last trip to Allianz Stadium back in Round 12 when they were handed their biggest loss of the year to the tune of 24-2.

There were a number of outliers in that result though given Melbourne's Origin stars were battle weary and Jared Waerea-Hargreaves, who dominated that night, will be watching from the stands on Friday night.

The major talking point heading into Friday night will be the fitness of Storm skipper Cameron Smith.

The champion hooker has not trained all week and was absent from Monday's captains call as he continues to battle a virus that has left him bed-ridden.

Watch Out Roosters: With wins of 36 and 30 points respectively since the season-ending knee injury to Jared Waerea-Hargreaves you could make the case that the Roosters are doing just fine without their Kiwi talisman. However by heading into Friday night without him, Trent Robinson's side surrenders a significant edge. JWH was a difference-maker back when these two teams met in Round 12. It was not so much what he did with the football but his ability to keep opposing prop Jesse Bromwich from having any real influence on the game. Bromwich could manage just 97 metres that night, well short of his season average of 162. Waerea-Hargreaves was relentless in the face of the Storm forward pack and got under their skin; this week may prove just how important he is to this Roosters side.

Watch Out Storm: Even without JWH the Roosters' best chance of beating Melbourne is by monstering them up the middle. That is exactly the approach they took the last time the Storm came to town and it paid dividends. Melbourne were simply overpowered as they allowed the Roosters to march for 2014 metres, nearly double their own tally on the night. They also surrendered 41 per cent of possession and against the minor premiers that equates to nothing short of a disaster. The Storm must control the football on Friday night and starve the Roosters forward pack of possession if they are to be a chance in this contest.

Key Match-Up: Roger Tuivasa-Sheck v Cameron Munster. Sit back in your seats, strap yourselves in and prepare for the battle of the young guns. Confidence is in no short supply for these two fullbacks who seem to hold no fear when the spotlight is cast upon them. No player gained more metres in season 2015 than Tuivasa-Sheck; in fact the 22-year-old had almost 2000 metres than anyone else in the NRL. The Storm will be well aware of the threat RTS poses after he finished with 271 metres, a line break and an assist back in Round 12. Munster's emergence in the absence of Billy Slater has shown that this 20-year-old is set for future stardom. The Storm No.1 carries his own strong form line into Friday night, averaging 179 metres per game – ranking him fourth in the NRL. These two kids may have less than 100 games of experience between them but that only makes this match-up all the more mouthwatering.

The History: Played 29; Sydney 14, Storm 15. The last six games between these two teams have been split at three apiece although the Roosters have won three of the last four meetings.

What Are The Odds: Sportsbet have actually taken more money on the Storm in this match despite the Roosters' golden run of form. There's 40 per cent more cash invested on Melbourne in the head-to-head market, and Storm 1-12 is the way punters are going in margin betting. Shaun Kenny Dowall has been the best backed for first try scorer however. Latest odds at Sportsbet.com.au

The Way We See It: Cameron Smith's body could not have picked a worse time to pack it in although you never count a champion out. That being said, the form of the Roosters is as good as it gets and they will be in no mood to take the foot off the gas. Roosters by 8. 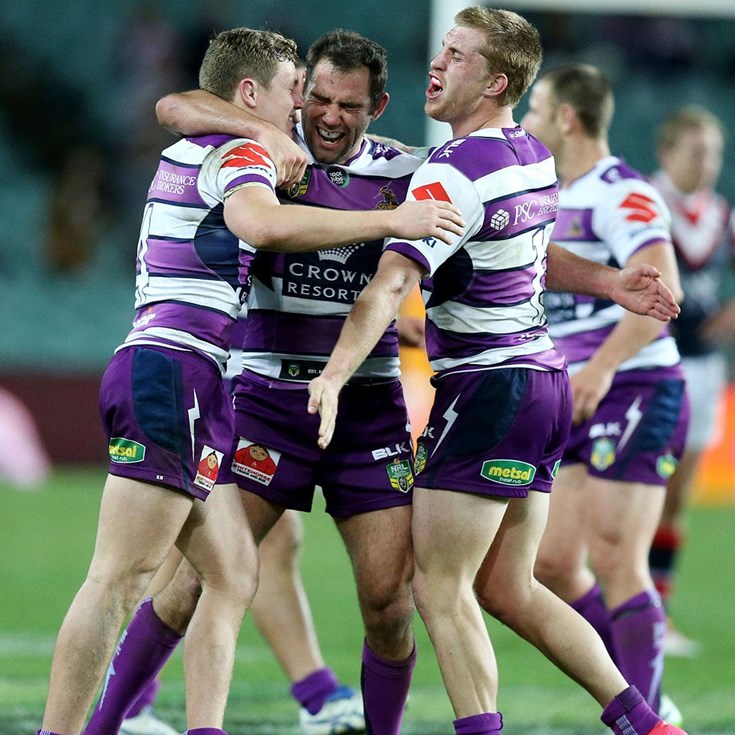 The final moments of the Roosters-Storm 2015 QF