This week, NRL.com sat down with Broncos legend and Townsville local Gorden Tallis to discuss his torn allegiances, the legacy of one of the game's greatest players and which men will have the biggest say on Sunday's Grand Final result.

NRL.com: You're a Brisbane premiership-winner from Townsville, who do you want to see win it?

Tallis: I'm 50/50 mate, I've got massive ties to both. I captained the Broncos and I'm a proud Bronco, and I'm a proud Queenslander. But I'm from North Queensland as well and I know what it would mean to the region, the fairytale. Last year I went for South Sydney because I thought that was the best thing for the game and I think the best thing for the game of rugby league this year is for the Cowboys to win.

NRL.com: You do have a few ex-teammates still playing for the Broncos though?

Tallis: Yeah Corey [Parker], Sam [Thaiday] and Justin [Hodges]. I played with those guys so I'm a little bit loyal to those guys.  When people ask me 'who do you want to win', well I played with those guys and I'd love to see Justin and Sammy and Corey win a Grand Final, those three senior players because I know how much they mean to you when you're a senior player, more than a young kid coming through. A young kid coming through you don't get the raps because the old guys sort of get you there. But you've got blokes like Michael Morgan – my dad coached his dad and Morgo's a good fella. The North Queensland Cowboys, I know what it'd mean to the region so I seriously am torn. I'm a North Queenslander that played with the Broncos.

NRL.com: have you had a chance to get up there recently?

NRL.com: So who do you think will win?

Tallis: It comes down to three players from each team.

NRL.com: Ok. Are we talking about the halfbacks?

Tallis: No. I'm talking about Adam Blair, Sam Thaiday and Corey Parker versus Matt Scott, Jason Taumalolo and James Tamou. Whoever gives the halves more opportunities, they will win.

NRL.com: You mentioned you're a proud Queenslander, are you happy to see the first all-Queensland decider?

Tallis: I'm more ecstatic to see really good teams that play a great style of footy. They're not the block play style, they don't wrestle as much. The style of play that they play is really enterprising. The first final game, to watch that live, 'Gus' [Phil Gould] was excited, everybody was excited. As an ex-player you wanted to be out there and you don't often get that feeling anymore. Probably because I'm old and a bit fat and I wouldn't last but they really play a great brand of footy. That's why they get 50,000 people to the game. High quality, everybody having trick shots, just making tackles. It would have been a wow of a game to play in.

NRL.com: and what about Thurston? It would be great for his legacy to guide the Cowboys to a maiden premiership.

Tallis: I think it would be huge for him. It's the last piece of the puzzle for him. When he can sit back, put his feet up on a desk and have a cigar.

NRL.com: it would put him up there with any of the all time greats...

Tallis: Everybody says he's got to win it, that's a myth. That's just the cool thing to say that they're judging him, but if they're really judging him – he's the greatest. I always said Geoff Toovey was the toughest. I think now Johnathan Thurston is the toughest player that I've seen play the game and I've never seen a better competitor. He competes harder than any person I've seen in any sport.

NRL.com: he pretty much sparked their season in Round 4 against Melbourne...

Tallis: They were going into their fourth loss of the season. If they lose that who knows whether the wheels fall off? Maybe a couple of bolts were loose, you'd have to ask them internally, they would have been struggling but they won, he kicked two field goals to win that game.

NRL.com: his legacy off the field is pretty special too, with what he does for the kids.

Tallis: Yep. He even gave my son a head gear. My son's got my Clive Churchill Medal, he's got my Grand Final rings, he's got all my Australian jerseys, he's got everything and that bloody head gear is pride of place! But that's what Johnathan Thurston brings. That little kid in Melbourne [who Thurston gave a head gear to in last week's Preliminary Final], it was sweaty and he put it on, his mum was there – he should win a Dally M just for that.

NRL.com: thanks for your time! 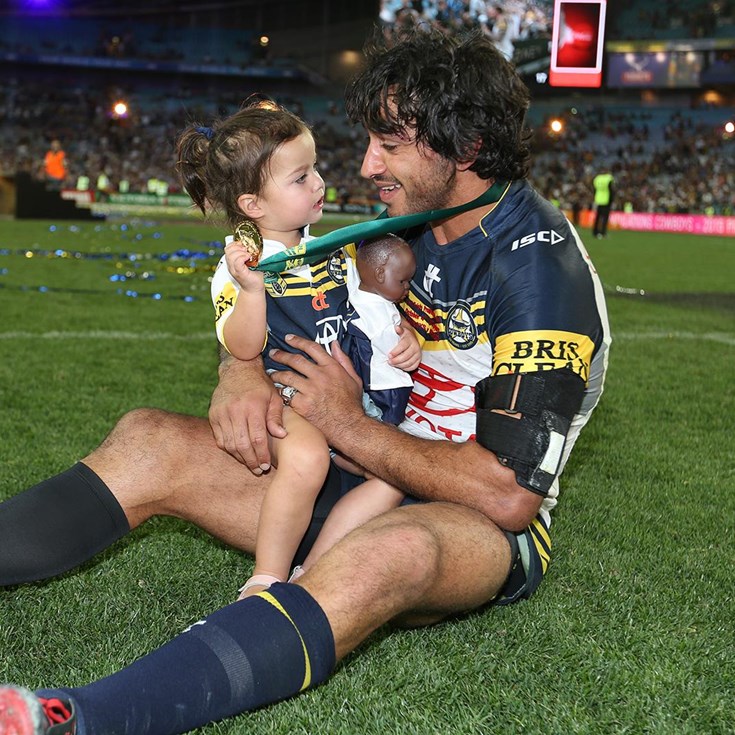 Celebrity poll: Who will win the GF?