The NRL seems to throw up so many upsets even the most confident of tipsters sometimes feel like they'd be better off entering their weekly tips with the aid of a dartboard. However sometimes the boilovers are so big that simply nobody saw them coming. Here are our picks for the 10 biggest upset wins of 2015.

The defending premiers spent their off season looking invincible, taking out the World Club Series and Auckland Nines trophies. They opened their 2015 account with an absolute monstering of eventual grand finalists Brisbane in a powerful 36-6 effort at Suncorp Stadium before disposing of the Roosters and Wests Tigers in Rounds 2 and 3. So powerful did they look, bookmakers were opening markets on when (and even if) the Rabbitohs would record their first loss. The Eels, on the other hand, failed to back up a bright Round 1 win over Manly in slumping to poor losses against the Bulldogs and Warriors. Despite the final 13-point margin the match was in the balance until the final minutes with the Eels clinging to a 22-16 lead until a 77th minute Chris Sandow field goal sealed the deal.

After a horror 2014 season Cronulla fans were hoping for far brighter things in 2015 but those hopes were fast unravelling as the club plunged to a horror 0-4 start. Heavyweights the Roosters had already stamped their class early with a dominant win over eventual premiers North Queensland in Townsville to kick their season off and were 3-1 at that point, their only loss coming to a then-unstoppable Rabbitohs outfit. Enter little-known rookie Jack Bird, who had made an understated NRL debut off the bench for Cronulla the week prior. Bird was promoted to starting five-eighth in Round 5 and exploded with a monumental 80 minutes in which he scored two tries and set up another to stun the Tricolours. Just to prove it wasn't a fluke the Sharks backed it up by grinding out a 10-4 win over the same opponents at Remondis Stadium in Round 13 in what was considered almost as big an upset as the first win.

It came as a surprise to many to see regular powerhouse Manly propping up the NRL ladder from last place for a big chunk of the season. From the time they lost centre Clint Gutherson for the season in Round 1 to an ACL injury and five-eighth Kieran Foran to the first of several hamstring layoffs in the same game their season never really recovered. Meanwhile the fast-starting Storm were 5-2 after seven rounds to be leading all comers. Manly at 1-6 had just the one win all year and that, amazingly, had come against the Storm in Round 2. That was a nailbiter at their home fortress Brookvale but by the time Round 8 rolled around nobody was expecting Geoff Toovey's battered charges to roll into AAMI Park and go home victorious. That's exactly what they did though in an Anzac Day classic, coming back from 10-0 down at half-time thanks to tries to Tom Symonds and a match-winner to winger David Williams in the 72nd minute.

Looking back now it may sound odd that the grand finalists beating the wooden spooners was considered an upset but at the time this was looking very much like a Newcastle win, on paper. That's despite the fact the Broncos were co-ladder leaders heading into this one while Newcastle's strong 4-0 start had already fallen apart following a five-game losing streak. But this was the first Origin-hit bye round and the Broncos had lost Sam Thaiday, Corey Parker, Justin Hodges, Josh McGuire, Darius Boyd and Matt Gillett to Queensland duties. In came names like Joe Boyce, Francis Molo and Aaron Whitchurch. Despite falling behind 18-6 in the shadows of half-time the Broncos hit back and a second-half surge saw them earn a shock runaway win as they remarkably went undefeated right throughout the Origin period.

By the middle of the season it had started to become clear the Rabbitohs weren't quite going to be the all-conquering force in 2015 that they had threatened to be over the early stages. Still, at that stage they had won eight games compared to the Tigers' four, and the absence of Wests' Origin stars Robbie Farah and Aaron Woods was considered a far bigger hole to fill than Greg Inglis for the Rabbitohs. Few gave the Tigers a hope of springing an upset and yet they not only did it but did it in utterly commanding fashion, blasting the defending premiers off the park in a match that may be best remembered for a monstrous fend from a try-bound Marty Taupau on hapless stand in Rabbitohs fullback Alex Johnston.

After losing their first three games then getting out of jail (and off the mark) against Melbourne in Round 4, the eventual premiers went on a tear, racking up 11 straight wins. This was the match that hot streak finally came to an end. We should add there is one big asterisk next to this one – player of the year Johnathan Thurston was given a much-needed rest. Still, the Cowboys had no shortage of star power in the playmaking roles in the shape of Michael Morgan, Lachlan Coote and Jake Granville, a powerful forward pack, plus home ground advantage. At this stage of the season the Cowboys were sitting in second while the Sharks were still outside the eight so for them to fly up to Townsville to stop the North Queensland juggernaut – Thurston or no Thurston – was a massive achievement. It was a far greater surprise given the home side exploded to an 18-0 lead, and kept their opponents scoreless in the opening half. It was left to the Sharks to dominate a four-tries-to-nil second half to get the job done the hard way.

By this stage of the season the contenders have been well and truly separated from the pretenders and the Storm were comfortably ensconced in the top eight and looking to make a charge for the top four, while their opponents by that point were flat out avoiding the wooden spoon. The Tigers had also failed to make a dent at their spiritual home ground of Leichhardt Oval, losing all three prior games there in 2015. Things were going to script when the home side fell to an early 10-0 deficit thanks to an early double from ex-Tiger Marika Koroibete but it was all one way traffic thereafter as James Tedesco ran amok with two tries and two try assists.

The late-surging Sea Eagles sparked into life over the final third of the season as they looked to make an unlikely charge into what would have been their 11th straight finals series. They came into this one on the back of four straight wins, the highlight of which was an absolute pummelling of eventual grand finalists Brisbane 44-14 at Gosford. The Eels meanwhile had just one win from their previous five games – a thoroughly unconvincing 10-4 victory over an injury-ravaged Penrith in Darwin – and with little to play for other than pride were expected to be easy pickings for a Manly side finally flexing its muscle. Things didn't go to script, however. On a wet and slippery Sunday it was hard to judge to what extent it was Manly playing poorly compared to the Eels playing well but the Sea Eagles' error-strewn effort in the face of a spirited 80-minute performance from Parramatta was a sorry way to see their finals hopes effectively flicker out.

The Storm made something of a habit of losing to bottom-two sides throughout 2015 but this defeat was arguably the most surprising of the lot. Eventual wooden spooners Newcastle already had one hand on the unwanted piece of kitchenware by this point and were given little chance in this David and Goliath battle. It was 6-all after 10 minutes in a bright start but some resolute Novocastrian defence kept the red and blue line intact for a further 70 minutes. They scored twice more in the first half and a Tyrone Roberts penalty goal proved to be the only scoring play of the second stanza as the visitors ground out a morale-boosting and highly unexpected win that seriously dented Melbourne's top-four hopes at the time.

Manly's late-season charge was well and truly extinguished by the time they took the field for what was, to them, a Round 26 dead rubber against top-four aspirants Cronulla. In fact since Cronulla's Round 17 loss to Manly only Melbourne had taken two points from them in a stretch that saw them win seven from eight leading into this one, while Manly had completely collapsed with back to back losses against the Eels and Roosters to see their season fizzle out. With a top-four spot guaranteed with a win, the juicy prize was expected to be enough of a carrot for the Sharks to bring their best footy against a deflated side playing for nothing but pride. Manly had other ideas, sending outgoing coach Geoff Toovey out a winner and spoiling Cronulla's finish with a result that saw them pitted with a sudden death trip up to North Queensland in the second week of the finals rather than a second chance and home final. 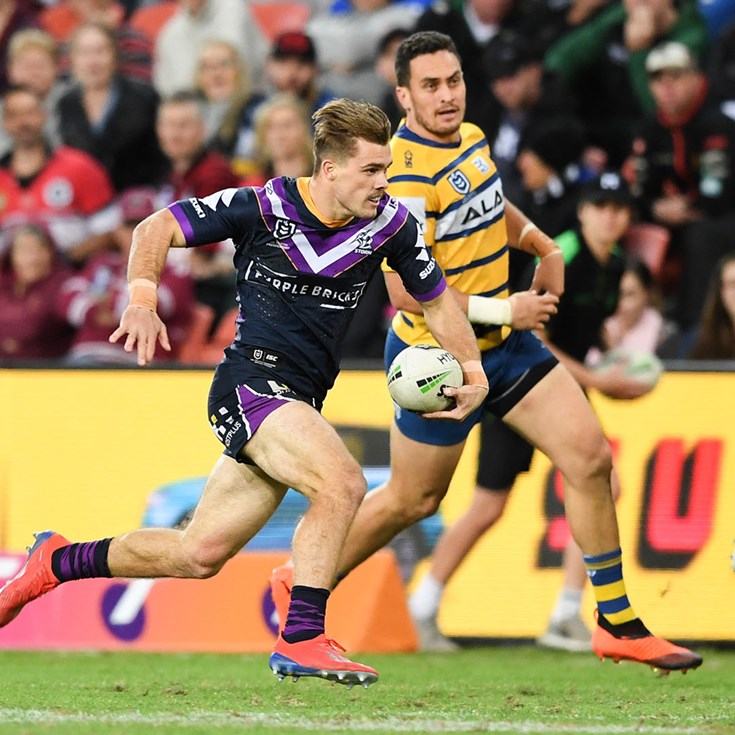