On the eve of White Ribbon Day, NRL Chief Operating Officer Suzanne Young sat down to provide a personal account and reflection on what White Ribbon Day means to her, together with discussing the current state of domestic violence and rugby league's responsibility and voice in helping change behaviours in the game and amongst communities.

Suzanne is a passionate advocate for women in sport and during the course of her first year at the NRL, has established the Women In League mentoring program – celebrating and acknowledging the role of women at all levels and in all areas of the game.

Suzanne will be one of thousands walking tomorrow and taking the White Ribbon oath – to stand up, speak out and act to prevent men's violence against women.

You can support Suzanne and communities far and wide by taking the White Ribbon oath and learning more at whiteribbon.org.au

Tomorrow, Thursday 25 November marks the beginning of a 16-day call for action – commencing on the International Day for the Elimination of Violence against Women and concluding on 10 December, Human Rights Day. The 16 days of activism against gender-based violence aims to raise public awareness and mobilise people from all around the world to bring about change.

While the UN Secretary-General's UNiTE to End Violence against Women campaign invites you to wear orange and to "Orange the World", to symbolise a brighter future without violence, I don't have a lot of orange in my wardrobe and will be wearing a White Ribbon as I participate in one of the annual Sydney White Ribbon Walks, this particular one organised by the New South Wales Police Eastern Beaches Local Area Command and Randwick City Council, from Randwick to Coogee.

I will be joined by many of my colleagues at the NRL, mentors and mentees from the Women in League mentoring program I established in March, women who sit on a variety of rugby league boards, current and retired players and representatives from clubs and state bodies. We will be visibly supporting White Ribbon on this day and as we do every day, raising awareness about domestic violence and asking men to stand up and say no to violence against women.

Our 'Voice against Violence Coalition'

In 2015, the NRL formed a 'Voice against Violence Coalition' with leading experts, White Ribbon and Rape & Domestic Violence Services Australia. Recently we became a recipient of $250,000 of Federal Government funding, along with several other major Australian sports, to assist the NRL to embed gender equality and respectful relationships into their networks and communities.

The NRL's 'Voice Against Violence' program was first introduced in 2012 and to date, has been made available to 1,500 Junior Rugby League clubs and delivered to at risk rural and regional communities.

I saw first-hand how powerful these sessions can be in leading change when I participated in a session with the Redfern All Blacks club. These players listened to the statistics that we all know and then shared their own, sometimes shocking, experiences as children and as men. It was emotional, raw and it was real.

At the end of the session, each young man signed a pledge as part of the rules of their club, not to commit, excuse or remain silent about violence against women. I was so proud of what they have decided to do as a club and the impact it will have on their communities. 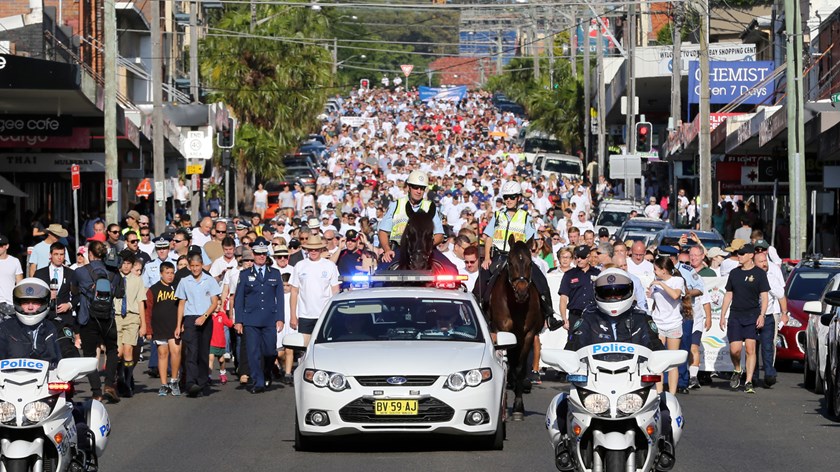 Earlier this year, I was a guest at a gala dinner and another guest took to the stage and decided to tell a joke. It was appalling – racist, sexist and making a joke of domestic violence. The organisers were rightly mortified. I took the opportunity to take the man aside and asked him whether it would be acceptable for domestic violence to happen to his mother, sister or daughter. I was angry, he was remorseful; I made him commit to working with White Ribbon to understand the impacts of domestic violence. After that incident, the organisers made a commitment that they would address this type of behaviour and the attitude that "it's just a joke, I didn't mean to offend anyone" across their whole sport.

Calling it out can make a difference. You can decide that enough is enough. You can change the way you respond the next time you hear a "joke" about domestic violence or gender inequality.

I've been inspired by the "like a girl" SuperBowl ad that championed female empowerment by showing the differences in how young women, boys and young girls perceive the phrase, "like a girl". The Super Bowl ad won kudos all over the Internet for changing the conversation about what it means to run, throw and do pretty much any activity "like a girl".

It became an internet darling because it resonated with experiences of men and women who'd been told at some stage in their life to "stop being a girl". I've always found this phrase offensive. It doesn't matter whether it is being said to a female or a male. A recent article discussed that telling boys to stop "crying like a girl" could cause mental health problems in later life, because it says to boys "they shouldn't cry" and furthermore, they should not "act like girls", as if girls are the only ones allowed to show emotion.

Earlier this year, Derrick Clifton wrote an article titled "If male athletes were asked the same questions as women, this Is how absurd it'd sound".

The interviews and male athlete reactions were pretty funny, but the contrast between questions by the media is also confronting. Clifton says, "when male athletes take an interview or undergo scrutiny online, it's usually focused on the game and their athletic abilities. Unfortunately, women find themselves having to answer questions on femininity, beauty and frivolous topics unrelated to matters of competition. It's as though the idea of a female athlete remains bewildering".

And it isn't just female athletes who experience this type of sexism. In September, I was at a corporate sports fundraising lunch. It was not a rugby league event. I arrived at my table and was allocated a seat next to a man who would not have been ten years older than me. His first words were to ask me whether I'd like to move seats "next to the women". I elected to move a seat away from him and ended up sitting between two men with excellent conversation skills that started by introducing themselves, asking me my name, how I came to be at the lunch, and so on.

The man who took the seat I vacated, excitedly elbowed his friend, the original man, in the ribs and shared my role at the NRL. I was no longer dismissed. Suddenly he was keen to hear about my job, get my contact details and enquire whether his son could come and have a chat to me about his career plan!

I tell you this story because unconscious bias exists in both the sporting and corporate world. I was originally dismissed because of his bias about my gender, his assumption that we'd have nothing to talk about or that I'd add no value to a conversation… his decision was made when he looked at me, before we'd even spoken.

Until that changes, there is more work to be done to make Australia a fairer place for women. An equal place for women. We should not be dismissed because of our gender, but should be judged on how well we perform in our roles and the value we add to our communities, our society.