The honour of playing for the 'pride of the league' is forever etched onto his neck but new recruit Chris McQueen says he wants to leave a winning culture as his legacy to the Gold Coast Titans.

Having only arrived on the Gold Coast on Sunday evening McQueen admitted to being slightly disorientated when he awoke on Monday morning and had "more butterflies than normal" as he joined his new teammates for a gruelling session in the early Queensland heat.

A whirlwind departure from Redfern that has in fact been months in the making saw him say goodbye to the red and green surrounds that he has called home for the past seven years and head north to help rebuild a club that has been put through the wringer.

Although only John Sutton has been at South Sydney longer than any other player in the current Rabbitohs' squad, the fleet-footed back-rower was largely kept out of the limelight due to the presence of superstars such as Greg Inglis, Sam Burgess and Issac Luke.

But as a five-time Origin representative for Queensland McQueen arrives at the Titans as their marquee signing of the summer and said that his influence on the team will dictate the legacy that is left behind.

"Souths are the oldest team in the comp and the Gold Coast are the newest," said McQueen, who signed a two-year deal with the Titans on Friday.

"To start building that legacy and to build a name for myself at the Gold Coast and playing in a successful team is absolutely the goal so I'm excited to do that.

"Having a look around the team there are a lot of young guys so I certainly think that the Gold Coast Titans are building for something good and I wanted to be a part of that.

"I've been around for a while now and a bit of an older head so I'm comfortable with that and happy to put my hand up and be a leader with the younger boys that are here." 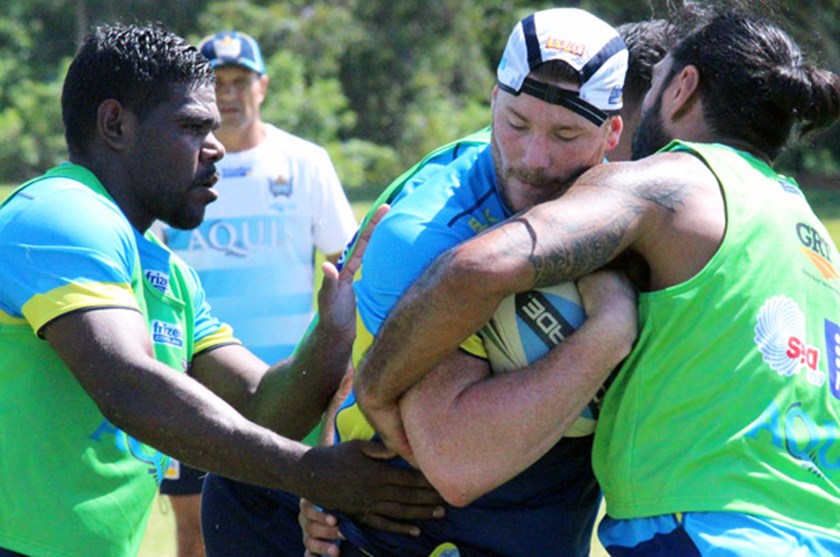 One of few familiar faces when McQueen turned up to training on Monday, Eddy Pettybourne was a teammate for four seasons at the Rabbitohs from 2009-2012 and said he was excited to have a player of McQueen's experience joining the Titans.

"He's obviously got a lot of big-game experience, he's played Origin and been to a grand final and the way he plays, he's pretty quick for a big fella," Pettybourne said.

"He prepares well before training and before games and Michael Maguire speaks really highly of him so he's a great asset to us.

"When he came into the [Rabbitohs] squad he was a big winger and obviously he's transitioned to the back row now but he's still the same, he just doesn't have the long hair."

Since making his NRL debut in 2009 and becoming the 1070th player to represent South Sydney, McQueen has seen the Rabbitohs squad undergo a dramatic transformation and said he is ready to become a leader at his new club.

"The best way to show leadership is by example," said the 28-year-old.

"Doing the right thing on and off the field and when we're doing those tough training sessions putting in that effort and putting in the effort in the gym. Not cutting corners and leading by example.

"The young guys that come into the squad look up to the older guys and see what they do and they mimic that so if the old guys are doing the wrong thing and cutting corners then the young guys are going to do the same.

"When you're building a culture everyone has to buy in. There are players coming from all different places that have been in different systems but everyone that comes into a new club has to buy into the one culture.

"That's the key to having a successful team."