There is something special about seeing Holden Cup players not only make the transition into first-grade but then dominating. Names like Ben Hunt and Anthony Milford were products of the under-20s competition, while 2014 Team of the Year graduates Valentine Holmes, Sam Lisone and Tepai Moeroa all excelled in the NRL last season. Not only are these players the future of the game, but they are also valuable assets for NRL Fantasy coaches with incredible money making potential.

Here are some of the players from last year's NYC who are set to feature in Round 1 of the NRL.

The Sea Eagles Holden Cup fullback was desperately unlucky to miss out on the Dally M NYC Player of the Year Award last season. His numbers in 2015 were mind-numbingly magnificent. In just 13 appearances, Trbojevic scored 21 tries, had 33 line breaks and ran for 3352 metres. After an extended stint in first-grade, he returned to the under-20s squad, running for 485 metres in a four-try romp against the Warriors. Trbojevic featured in nine NRL games last year, scoring eight tries on the wing, including a double on debut. He will start the 2016 NRL season on the wing, but don't be surprised to see him play a bit of fullback.

Injuries cruelled the former Eel in 2015, with Aloiai only able to play eight matches for the blue and gold. Now at the Wests Tigers, Aloiai has managed to break into the first-grade squad for their Round 1 clash with the Warriors. NRL Fantasy coaches should be wary of what happens when Dene Halatau returns next week, but if his teammates' appraisals over the pre-season are anything to go by, he could be in for a big 2016. In a disrupted season, the 20-year-old scored five tries for Parramatta in the NYC, running for 110 metres on average per game.

The 19-year-old looks set to make his NRL debut off the bench for the Warriors after an impressive NYC season for the 2014 premiers. Roache's versatility caught the eye of NRL coach Andrew McFadden, with the speed merchant playing centre, five-eighth and hooker for the Junior Warriors. Roache showed that he can play big minutes, and similar to his NRL teammate Issac Luke, is a willing runner of the ball out of dummy-half. At $130,000, he could be a cash cow option for NRL Fantasy coaches.

They might have lost Roger Tuivasa-Sheck, but the Roosters still have a player who has been touted as the next Greg Inglis. Latrell Mitchell is only 18 years old, but will make his NRL debut against Souths on the weekend. Mitchell was a machine in last year's Holden Cup, scoring 15 tries from 23 appearances at fullback. The superstar-in-the-making ran for over 3000 metres in 2015 and was rightfully named in the Holden Cup Team of the Year. Mitchell was fast-tracked into the World Club Series starting side, showing his worth with a number of scintillating runs on the right edge. His efforts in the UK, coupled with his performances at the Auckland Nines have forced coach Trent Robinson's hand, with Mitchell leapfrogging new recruit Joe Burgess into the NRL squad. While he was named on the wing for Round 1, don't be surprised to see him play fullback throughout the season. It's unfair to hype him up too much, but at $130,000, he is a Fantasy must.

One of the hottest young prospects on the open market last season, Jayden Nikorima opted to sign with the Roosters on a three-year deal. The pint-sized 174cm utility player has been a Holden Cup superstar, featuring heavily in Brisbane's narrow 2014 grand final loss to the Warriors, before scoring 10 tries from 13 matches in 2015. Injury cut short what had been another stellar NYC season, with Nikorima averaging more than one line break, and just under 100 metres a game. With Mitchell Pearce stood down, the 19-year-old has been thrust into the starting side at five-eighth, and has shown he is more than ready to step up in the State of Origin halfback's absence, having a hand in five of his side's seven tries in the World Club series. At $130,000, Nikorima is available in the halves or as a hooker, and is already owned by over 40 per cent of Fantasy coaches.

Injuries to Boyd Cordner and Jared Waerea-Hargreaves have opened the door for rampaging rookie Vincent Leuluai to make his NRL debut. Named on the bench for the clash with the Bunnies, the NYC graduate could be asked to play back row or up front. His numbers in last year's Holden Cup were impressive, with the damaging ball runner making 2260 metres from 18 matches. Roosters coach Trent Robinson was clearly impressed by the big man, picking him in the 17 for the World Club Series clash with St Helens. At $130,000, and with job security likely for at least the first five rounds, the dual role forward is one to watch.

With the Burgess twins set to return in the coming weeks, Musgrove is unlikely to feature beyond Round 1, but an impressive showing against the Roosters could make him a handy option for Michael Maguire, as well as Fantasy coaches. Musgrove spent two years in the club's NYC system, and proved to be a one-man wrecking-ball. His ability to make the most of his time on the field was highlighted by a dominant 57-minute display against the Bulldogs last season, running for 188 metres, making 30 tackles, and producing four offloads.

One of the biggest signings in the off-season, Ash Taylor joined the Titans after spending his junior years with the Broncos. Taylor is arguably the best credentialed NYC graduate heading into the 2016 NRL season. The 20-year-old halfback was named the Dally M Holden Cup Player of the Year, he was the Junior Kangaroos and Junior Maroons halfback, and he made his NRL debut for the Broncos in Round 26, only to suffer a compound fracture in a finger early in the contest. Taylor was expected to be behind Kane Elgey and Tyrone Roberts in the pecking order, but an injury to Elgey means he has been fast-tracked into Gold Coast's starting side for Round 1. Fantasy coaches have swooped on the talented Titan, with nearly 35 per cent of players keen to get him at $134,000. Taylor is a try-assist beast, scored nine himself in 2015, and could be a genuine goal kicking option, after nailing 83 goals last season, including 11 in one game.

With Tariq Sims out through suspension, Safiti looks like a genuine option for NRL Fantasy coaches. At just $130,000, and named in the starting side, he could well be one of the bargain buys of 2016. He churned out big minutes in his 15 NYC matches last season, regularly running for over 100 metres. His impressive form saw him promoted to the NSW Cup, where he started in Newcastle's win over Wyong in the 2015 decider. His physicality should see him make the smooth transition to first-grade, where he could play in the front row if required. 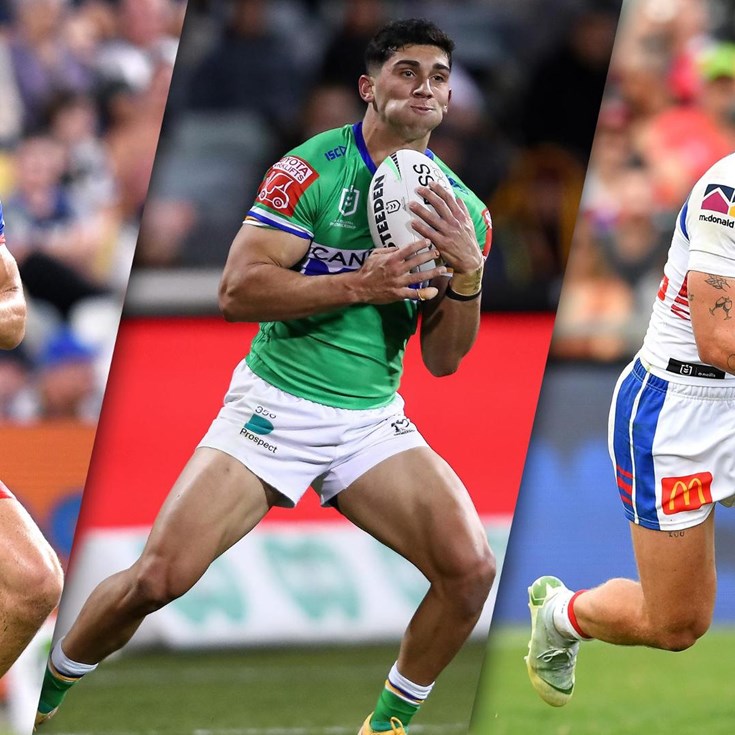 Warriors big men to the rescue