Parramatta's early-season halves injury crisis deepened as in-form playmaker Corey Norman left the field with a neck complaint in his side's 17-4 loss at home to the Broncos in the Telstra Premiership season opener.

Norman landed awkwardly on his head right before half-time, ending his night, after star recruit and halfback Kieran Foran was a pre-game withdrawal.

The Broncos took a little while to get going but never looked like conceding the game even before Norman was injured, which happened with Brisbane up 14-4.

For the visitors, winger Corey Oates was heavily involved, scoring one try and setting up another, while both halves Ben Hunt and Anthony Milford worked their way into the match well.

Draw Widget - Round 1 - Eels vs Broncos

It was mostly a sorry night for the new recruits; Brisbane centre and birthday boy James Roberts was largely anonymous; opposite number Michael Jennings was penalised for a double movement in attempting to score a try; Eels winger Clint Gutherson had some good moments mixed with some nervy ones under the high ball and fullback Michael Gordon – admittedly one of his team's best and brave in defence – suffered a nasty head gash and missed his only shot at goal.

The match had started with plenty of energy as both sides played an uptempo game with lots of ball movement and some early sets at the line from Brisbane revealed a steely edge to the blue and gold defence.

It was eventually cracked in somewhat soft fashion in the 15th minute after the first penalty of the game – against Brad Takairangi – when centre Jordan Kahu scored the season's first try from a long Ben Hunt pass.

Brisbane opted for two points from their second penalty around 10 minutes later to make it 6-0 before they stretched their lead further by pressing Parramatta's right side defence.

An offload from Kahu sent winger Corey Oates into space and his toe-ahead pulled up in goal for Milford to score.

The Eels got one back when debutant winger Greg Eden spilled a towering Kelly bomb and the Eels spread it right where Clint Gutherson profited from a Takairangi offload.

Brisbane's interchange rotation was put under pressure when Kahu's night was ended by a quad injury around the half hour mark but busy winger Oates continued his strong game running onto an offload from Alex Glenn – playing centre in Kahu's stead – set up Brisbane's third try.

Disaster struck for the Eels when Norman landed on his head awkwardly right before half-time and did not return after the break and while reserve half Kelly tried hard with makeshift No.6 Kenny Edwards, the Eels just couldn't get into the game in the second half.

They stuck to their task but an underwhelming second half's only points came from a Milford penalty goal and field goal to seal the result.

Kahu and Norman will be each be assessed during the week with their injuries initially not appearing serious.

The reduced interchanges were put to the test by both teams losing backs for the game in the first half while the first outing of the new video referee bunker was a rousing success with the handful of adjudications decided quickly and accurately. 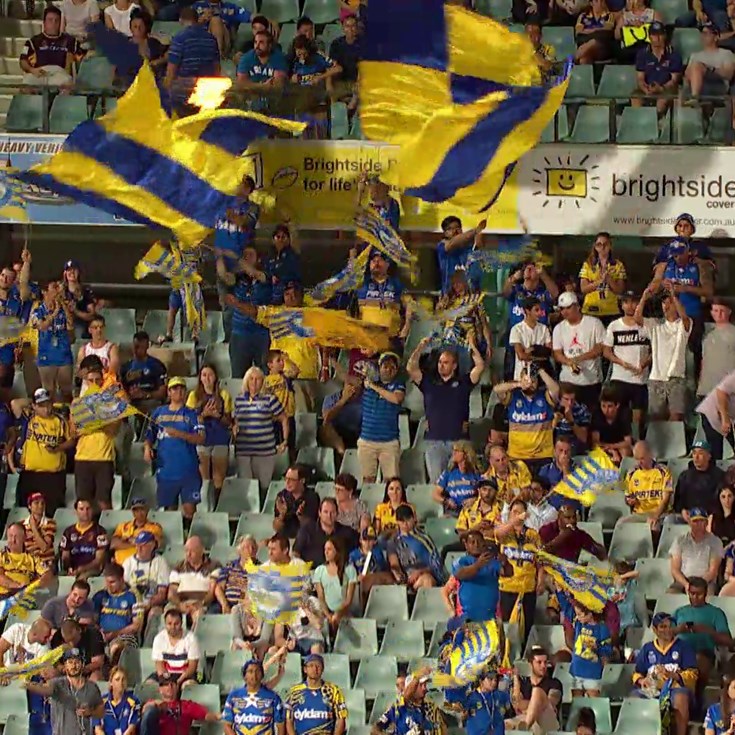 Eels expect both halves back for Round 2