After making his NRL debut at the weekend, rookie Penrith forward James Fisher-Harris is bracing himself for a showdown with the colossal Canterbury pack on Thursday night.

The 20-year-old was a late inclusion in Anthony Griffin's side on Saturday, replacing the experienced Elijah Taylor on the bench, and held his own against the Raiders in the nation's capital.

Fisher-Harris was a member of Penrith's 2015 NYC premiership-winning team, playing 10 games for the club, highlighted by a brutal 220-metre game against the Eels that featured eight offloads.

The Junior Kiwis representative relished his 18-minute stint on Saturday afternoon and admitted he felt a noticeable difference between the lower grades and the NRL.

"It was up a level from 20s and NSW Cup, but I was expecting it. Everything was just really up in intensity. It was everything I thought it would be," Fisher-Harris said.

"I was a bit scratchy. I was just nervous on the sidelines waiting the whole 40 minutes. But when I got on I just tried to do my best."

Asked about a particular offload that saw him turnover possession, Fisher-Harris smiled: "He [Griffin] specifically told me to hold onto the ball".

"That was just a brain snap. I wasn't even supposed to, but I was just trying to pull off the magic play but it didn't work out," he said.

While he didn't have a chance to stamp his authority on the game, the young Panther earned comparisons to former Queensland and Australian enforcer Gorden Tallis; a tag he's happy to embrace.

"It makes me feel pretty proud of myself because he was a big hitter and an aggressive guy when he used to play. I try to bring aggression onto the field when I come on," Fisher-Harris said.

Draw Widget - Round 2 - Panthers vs Bulldogs

That sort of intensity will be crucial against the Bulldogs, given how dominant the Canterbury forwards were in their Round 1 win over the Sea Eagles.

The one-man wrecking ball will take on some of the players he looked up to when he was coming through the ranks, but holds no fears against a side that bullied their way through Manly.

"I've always been a 'little grown up' playing against bigger guys, so I'm pretty keen to take them on.

"It used to be Frank Pritchard [that I looked up to], but he's gone now. Greg Eastwood and Sam Kasiano, they're pretty good forwards."

Teammate Reagan Campbell-Gillard was confident his fellow forward would handle the occasion, admitting his form at training was scary.

"He's one crazy kid that you don't want to run at. He'll absolutely hurt someone. He just throws his weight around like he's been playing first grade for years," Campbell-Gillard said.

"I think he'll handle it very well. We had the trial against the Bulldogs a few weeks ago, and he came out firing.

"I think he was a bit nervous there on the weekend. He had to get his first game out of the way but if he gets a chance this week I'm sure he'll do some damage." 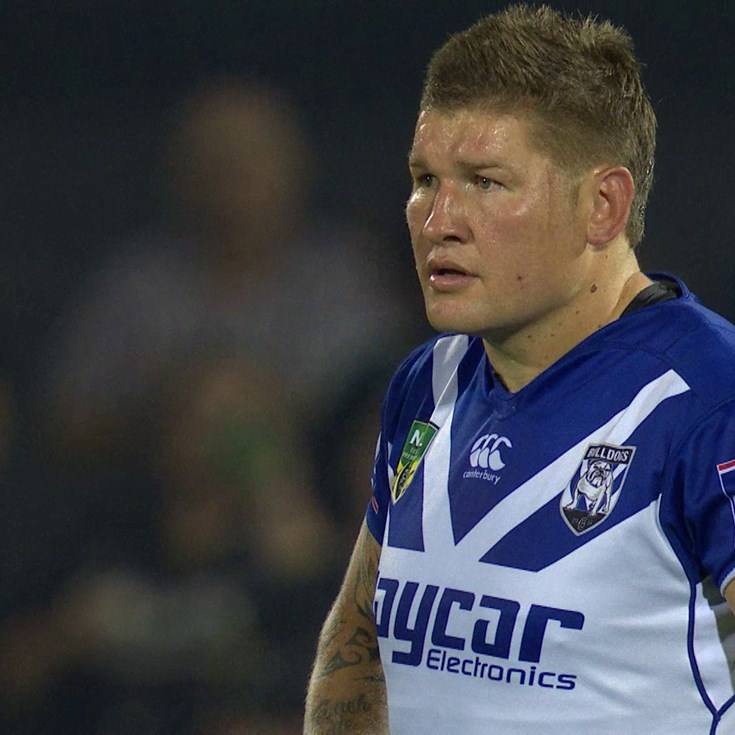