Every Thursday brings a whole new game and in Round 2 we have the Panthers taking on the Bulldogs. All you need to do is pick six players from both teams, select a captain (who will score triple points) and a vice-captain (double points) and see your NRL Fantasy points roll in while watching Thursday Night Footy.

Hooker (HOK)
As James Segeyaro and Michael Lichaa are both out with long-term injuries, Bulldogs hooker Craig Garvey is the only player available to pick in this position for this Match Day Thursday. Tyrone Peachey has been named at hooker for the Panthers, but in NRL Fantasy he can currently only be selected as a second-row forward.

Front-row forward (FRF)
Bulldogs starting props James Graham and Aiden Tolman scored some big Fantasy points in Round 1 against the Sea Eagles, racking up 69 and 61 respectively. Sam Kasiano also managed 49 points coming off the bench. For the Panthers, Sam McKendry (14 points) and Reagan Campbell-Gillard (17) didn't fare so well in Round 1, where Jeremy Latimore was Penrith's best FRF scorer with 31 points. Take your pick between Graham and Tolman here, and both are great captain/vice-captain options.

Second-row forward (2RF)
The Panthers scored better than the Bulldogs in the 2RF NRL Fantasy position in Round 1 with Trent Merrin bagging 54 points and Tyrone Peachey 47 points. Bryce Cartwright played 80 minutes but only scored 37 points – he may have some upside. For the Bulldogs Josh Jackson scored 41 points and Tony Williams 38. Merrin looks like the top pick here and is also a candidate for captain or vice-captain.

Half (HLF)
Bulldogs halves Moses Mbye (53 points in Round 1) and Josh Reynolds (46) look to be the top picks for HLF. Those two players pulled Manly apart last week and will be aiming to do the same in Penrith. Panthers fullback Will Smith is a dual-position player in Fantasy which means he can be selected as a half or a fullback in the game. Smith scored 34 points in Round 1 and could be a good point of difference in the HLF position this week.

Centre (CTR)
Traditionally the lowest scoring of the six Fantasy positions, CTR can be a tricky one to pick. You are generally relying on attacking stats from your CTR such as tries, try assists, tackle breaks and line breaks. Two dual-position players are options here. Isaah Yeo is named at second-row for the Panthers but can be selected at 2RF or CTR in the Fantasy game. If Yeo gets his tackling and run metres stats up he could be an astute selection at CTR. Bulldogs fullback Will Hopoate can be selected at centre or fullback in NRL Fantasy and could also be a great point of difference at CTR.

Wing-Fullback (WFB)
Peta Hiku (37 points), Josh Mansour (35) and Will Smith (34) all scored well for the Panthers in Round 1, while Curtis Rona (32) had similar Fantasy stats for the Bulldogs. Canterbury winger Sam Perrett scored 45 Fantasy points in Round 1 thanks largely to a try and four tackle breaks. Which team's wingers do you think will score more tries tonight? Which Will at fullback will score more points on kick returns? 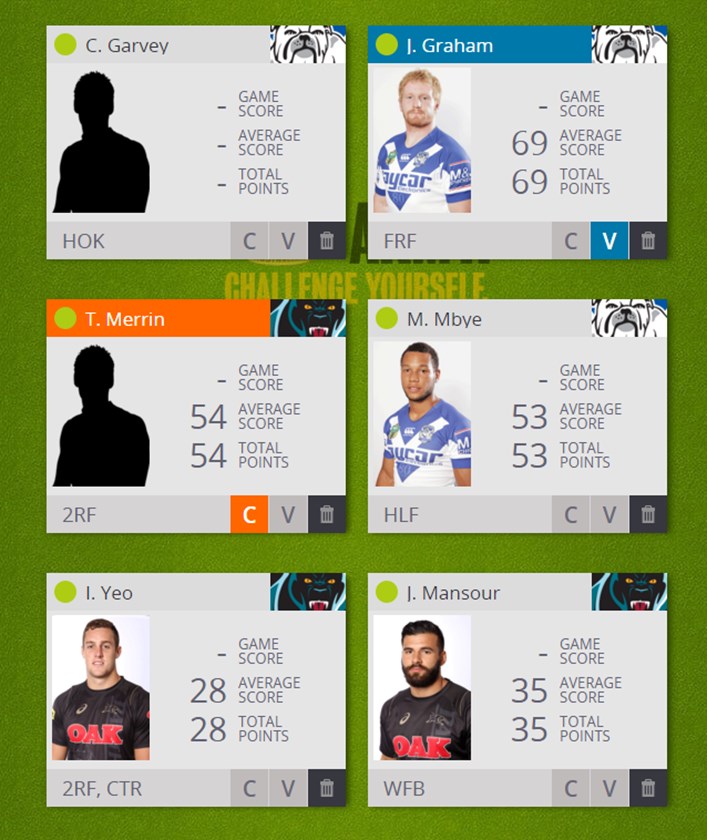 Most-watched tries of the year: No. 2