Canberra's injury toll continued to grow but they managed to fight back and beat the Roosters anyway to continue their winning start to the 2016 season.

Canberra coach Ricky Stuart had some incredible praise for his team after their gritty one-point victory over the Roosters, saying it was the toughest performance he'd ever seen from his side.

"I've witnessed a lot of tough wins under challenging moments and adversity but I haven't seen one tougher than that," Stuart said.

"We just had so much desire. I often say desire and want equal success and they proved me right."

And the Green Machine certainly faced a stack of adversity on their way to their second straight victory to start the season, losing Shaun Fensom in the opening minute of the match, Lachlan Croker for the second half and Joey Leilua to the sin bin.

"We never gave up. We had some very, very trying moments out there and we had challenges, it's really challenging us at the moment our injuries," Stuart said.

"But they've got a very proud coach and they know that."

Jake Friend was the only experienced player in the Roosters spine on Saturday afternoon and late in the game that inexperience showed, with neither Jackson Hastings nor Jayden Nikorima able to set up a field goal.

"Bit disappointed on finishing the game, that's a bit of us collectively knowing what we want in the end," Roosters coach Trent Robinson said.

"We probably haven't done enough work on it (late-game situations) but yeah it just wasn't clear at the end. It would have been nice to get a point there but it wasn't to be."

Friend echoed his coach's sentiments on the subject.

"There were just a couple of sets at the back end there where we had an opportunity but we didn't get it on," Friend said.

"Hopefully if we're back in that position again we'll get that field goal on."

Home woes are over in Canberra

Five times in 2015 the Raiders lost at home by two points or less.

So far 2016 has been a very different story.

For the second straight week Canberra overcame injury woes to win a close home match, signaling a significant shift in attitude at the club.

"Even games last year that we lost (at home) we didn't give in," Stuart said.

"The player's attitudes and the camaraderie and spirit they're building through a lot of hard work, I'm really proud to be involved in it."

The Roosters are on the improve

They're 0-2 to start a season for the first time in 23 years but the Sydney Roosters are heading in the right direction.

Not only was their effort and execution far superior to what they offered in a dismal first display against the Rabbitohs last week, but also their young guns showed that the future is bright for the Eastern Suburbs club.

"There was a big improvement from last week," coach Robinson said.

"The effort was there, and execution on some things was really, really good.

"But as you get some times there were some highs and lows that you don't want to see again."

Friend also noticed the improvement in the team. "From last week to this week there's been a big change," he said.

Papalii stepping up for Canberra

At crucial stages he got his side on the front foot with his powerful running game, while also crossing for two impressive tries. 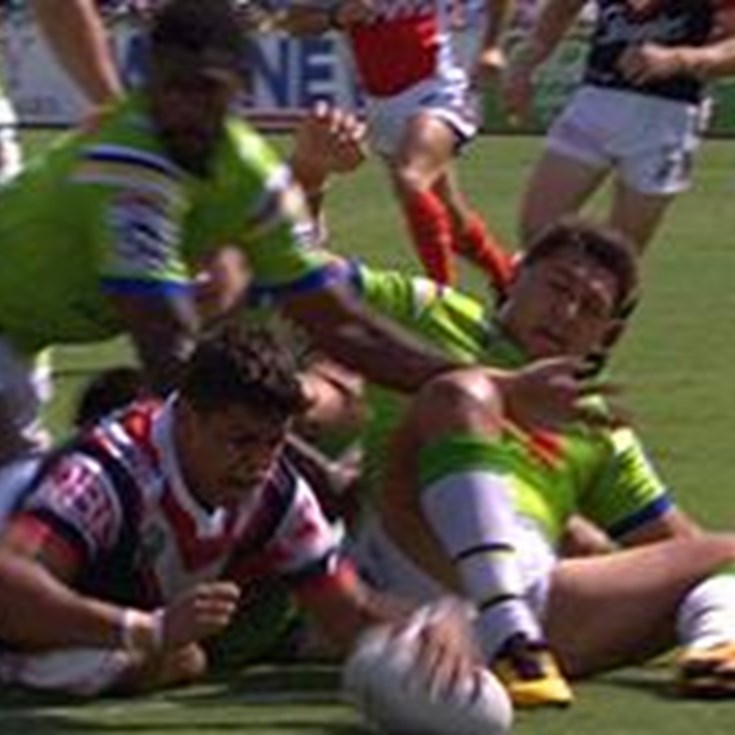