The depth in the forward pack that relegated him to a place on the bench is exactly what the Titans need to be genuine finals contenders in 2016 according to Gold Coast prop Ryan James.

For the third time in the past four years the Titans have begun a season with two wins from their first three games, a 30-18 win against the Wests Tigers on Saturday night, their fifth win at home in succession.

The two previous occasions have failed to materialise into finals appearances but James believes the additions of Chris McQueen, Zeb Taia and David Shillington will help to capitalise on a promising start to 2016.

Having been promoted to the starting team last week against Melbourne, James went back to the bench against the Tigers and was pivotal in turning momentum the way of the home side when he was introduced after 20 minutes.

He scored a try, ran for 160 metres from a game-high 19 runs and made 21 tackles in a 47-minute stint that coach Neil Henry said helped to lift the tempo of his team after the initial Tigers onslaught.

Somewhat a victim of his own versatility in being able to play in the middle or on an edge, James said the competition for spots across the park will ensure the Titans remain competitive throughout the season.

"We've got a great pack and everybody's fighting for spots and with the boys playing like they are and with people constantly competing for spots it's going to be great for us," James said.

"We've got people that fit in everywhere and know their roles so hopefully we can stay injury free and keep playing consistent footy.

"We didn't start that game very well so we just had to try and bring some enthusiasm and try to stick to the game-plan. We had three offloads in the first set; we never ever planned or said to do that."

The most penalised player in the NRL last season, James has not made a single transgression in the first three games of the season, Henry praising his influence on a team that was trailing by 10 points when he was introduced after 20 minutes.

"What changed a little bit at that first interchange was Ryan James was really good off the bench. He really lifted the tempo which was great, that's what we wanted him to do," Henry said.

"He's always had that potential and there might not have been that consistency about what he did but last year, his first 12 games were very good for us at edge back row.

"Our back row is settled now with a couple of new recruits and he's getting the handle on the role in tight and it was a good game tonight.

"He needs to build on that. He's an important part of our forward pack and I think you're seeing a more controlled game from him.

"There are less penalties, it's better defence, there is some more discipline in how he's approaching it and he's worked hard.

"He wants to be better than he was last year and he's looking to really keep improving."

The Blues hopeful started in all 21 games he played last season but as the fittest running forward at the club has the potential to play an even more important role off the bench.

Henry admits that he is still tinkering with the make-up of his bench with the reduction in interchanges but likes what James brings in that role.

"He does play good minutes and as you saw he can have good impact off the bench as well," Henry said.

"If you put him on and he gets a break around half-time he can go good minutes in the second half as well so at the moment it's just trying to get that balance of what we get off the bench and what starts the game.

"Agnatius [Paasi] has been in good form too and Ryan handles coming off the bench a bit better than 'Iggy' did last time."

Eddy Pettybourne is expected to be available for selection against the Raiders next Saturday with Henry also praising the work of interchange forward Leivaha Pulu against the Tigers who ran for 93 metres and topped the offloads with four. 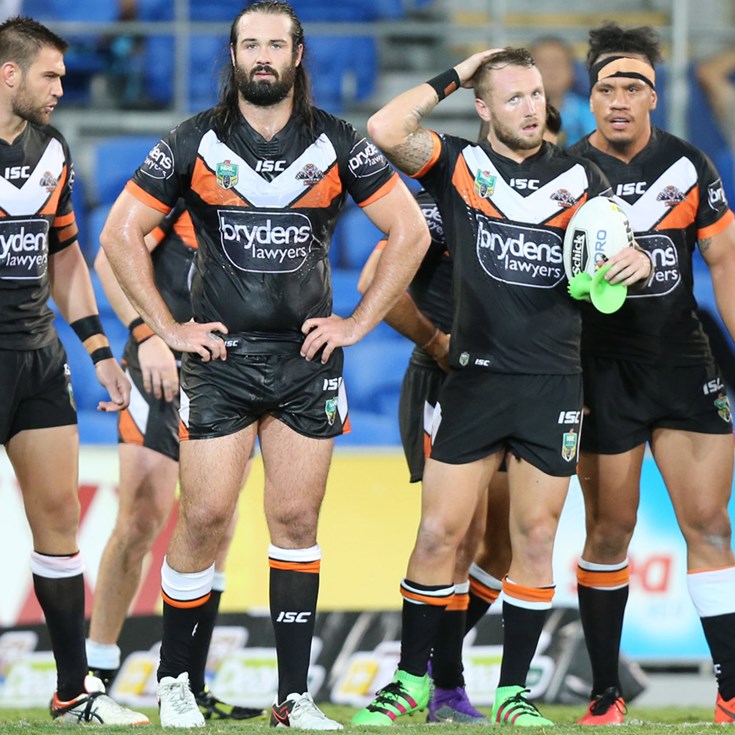