Melbourne's perfect start to 2016 has come to a grinding halt at the hands of the Sharks, going down 14-6 at Southern Cross Group Stadium on Monday night.

The win was Cronulla's first over the Storm since 2012, and just their second since a one-point victory in Round 2, 2008.

All members of Cronulla's back-five ran for over 100 metres in what was the perfect way to celebrate Michael Ennis's 250th game in the NRL – albeit one week late.

Cameron Munster was the Storm's best player, running for 219 metres and producing two line breaks, but even that wasn't enough to keep the winning streak alive.

Marika Koroibete could find himself in hot water for an alleged trip on Cronulla's Chad Townsend in the 60th minute, while talented centre Curtis Scott was forced from the field with a lower leg injury midway through the first-half.

Early reports suggest the Storm rookie cracked his fibula in what was his first game against the side he represented as a junior.

The reshuffle on Melbourne's left-edge saw Tohu Harris shifted to the centres, and with a big-man defending out wide, the Sharks smelled blood in the water.

The hosts went into the half-time break down by two, but it could have been a very different story had they taken their chances.

Draw Widget - Round 4 - Sharks vs Storm

Holmes made the first meaningful contribution of the game, intercepting a Blake Green pass and racing 80 metres downfield before being corralled by the cover defence.

They might have saved the try, but the Storm were quickly down to 12 men after Maroons centre Will Chambers was sent to the sin bin for holding down the winger for too long.

The Sharks speedster should have opened the scoring shortly after, instead spilling a perfect Chad Townsend pass with the line wide open.

Bird then earned the ire of Cronulla fans when he threw a forward pass to an unmarked Holmes close to the line, before spilling a Maloney bomb over the try-line just before the break.

Melbourne made the most of their reprieves, scoring through interchange forward Felise Kaufusi in the 20th minute, who barged over thanks to a well-time short-pass from former Shark Blake Green.

The visitors had gone close moments earlier, but front-rower Jordan McLean spilled the Steeden over the line while battling through three Sharks defenders.

It didn't take long for the Sharks to respond, and Ben Barba's effort was certainly worth the wait. After receiving an inside pass from James Maloney, the 2012 Dally M Medallist sliced straight through a yawning gap before putting on the afterburners to get around Storm fullback Munster.

After a mixed first-half effort, Holmes quickly found his groove in the second stanza, showing incredible pace to split the Melbourne defence before positioning Chad Townsend for his second try in as many matches at Southern Cross Group Stadium.

A couple of penalty goals to Maloney in the 47th and 61st minutes opened up an eight point lead for the Sharks, and it was a buffer they wouldn't surrender.

The hosts controlled the second-half, forcing several repeat sets to smother the Storm out of the contest.

It could have been worse for the visitors had Holmes been able to handle a cut-out pass from his halfback, but his uncharacteristically mixed night was capped by another case of the fumbles.

Melbourne never really looked like scoring after that, with both Young Tonumaipea and Koroibete being held up over the line by some dogged Cronulla defence. 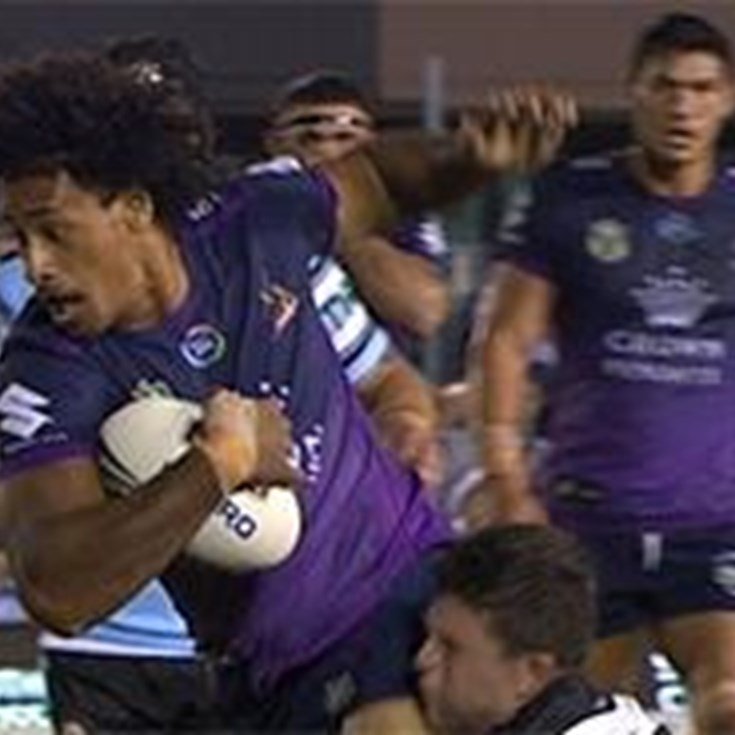