The great Harry Houdini was renowned for his incredible escape acts, but not even he could have done what the Cronulla Sharks pulled off in the Holden Cup on Monday.

Trailing 34-6 against the Melbourne Thunderbolts at half-time, the Sharks rallied from nowhere to stun their rivals with five tries in the final 18 minutes to seal the dramatic 48-40 result.

A try to Thunderbolts centre Joel Gittins in the 40th minute looked to have killed off the contest before the interval, but not according to Sharks skipper Jayden Brailey.

"You can't really think like that. Our last three games we've come from behind so I knew we had it in us and the boys stayed strong," the relieved skipper said.

"Our whole attitude just changed just after that try to start the second-half. We started off really strong and just went from there."

While obviously thrilled to get the win, the Cronulla No.9 was disappointed by his side's defensive frailties in the first-half.

"We should never have been in that position," Brailey told NRL.com after the game.

"To let them score that many points, it was almost impossible to come back but we just came out with a different attitude, got that early try and turned things around."

Most coaches would have blown a gasket with their side down by 28 points at the break, but according to Brailey, Sharks mentor John Morris handled the situation well.

"He had a pretty cool head. He just told us to get back to completing our sets, because every set we had we turned it over. You just can't do that against a good attacking side like Melbourne," the NYC star said.

Two tries in the first five minutes of the second-half got the Sharks back in the contest, before Brailey took the game by the scruff of the neck to will his side home.

Having scored earlier in the game, the Sharks skipper dominated the final 15 minutes, scoring his second, setting up winger Josh Tuilagi, and then delivering the hammer-blow by slicing through with five minutes to go to set up five-eighth Jack Williams to give his side its first lead of the match.

While most of the credit went to their inspirational leader, Brailey was happy to share the love with his side's kicker, Bessie Aufaga-Toomaga.

The Sharks centre managed just one from six a fortnight ago, but bounced back with a perfect 8 from 8 against the Thunderbolts.

"He kicks well, Bessie. If he hadn't have done his job there then we wouldn't be in this position," Brailey said.

Monday's game was the Sharks' first in 15 days after their Round 3 clash against the Sea Eagles was postponed due to inclement weather.

While the prolonged break probably helped the Sharks in the backend of Monday's win, Brailey says there was nothing fun about the week off.

"We were pretty gutted it got called off. We actually got flogged on that Monday so we pretty much played a game," he said.

"We didn't really get much of a rest but it probably rested a few of those bumps and bruises from the opening two rounds. I guess it kind of helped us a bit.

"We knew we'd get a bit of joy round that ruck, especially with their big boys because we're a really fit side. We just went at their big boys and luckily went through them."

The Easter Monday miracle catapults the Sharks into a six-way tie at the top of the Holden Cup ladder with a game in hand, while the loss was the second time this season Melbourne had scored 40 points and failed to win.

"It's massive for us. We're still up there with the leaders, and we still have a game up our sleeve. We'll take massive confidence out of this and hopefully we don't put ourselves in this position again." 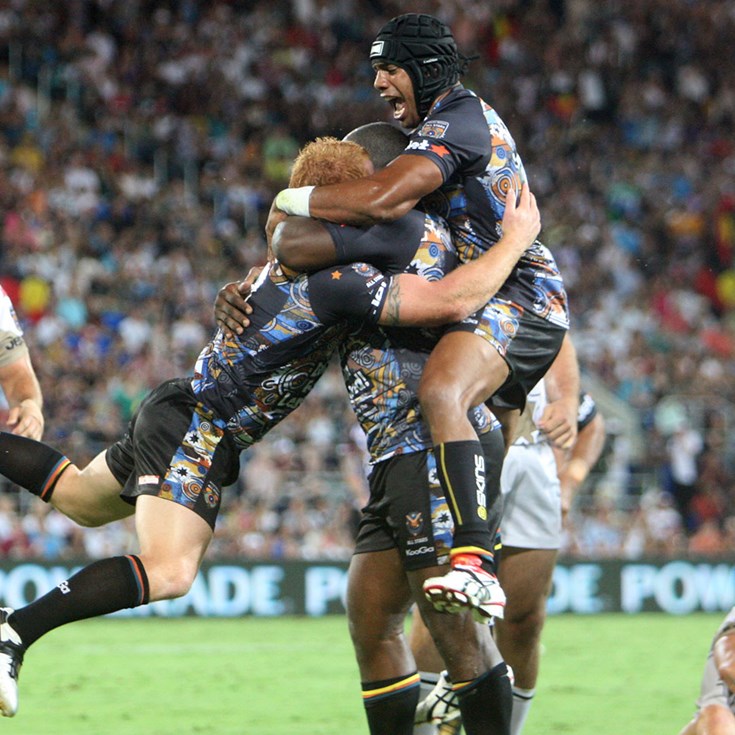