Manly showed wonderful resilience to overcome an early three-try burst from the Rabbitohs but a valiant comeback fell just short, the home side going down 16-12 at Brookvale Oval on Thursday night.

Souths exploded out of the blocks with their forwards running amok in a completely one-sided three-try opening to the game before Manly got themselves back in the grind and slowly clawed back a couple of tries but a few late attacking raids weren't quite enough to steal a remarkable victory.

Stand-in halfback Api Koroisau had a whale of a game as he and fellow ex-Rabbitoh Dylan Walker gave Souths huge problems with their evasive running games but inexperience in controlling proceedings as well as some kicking and last-tackle options ultimately hurt their chances.

Rabbitohs coach Michael Maguire will be left wondering how his side could fade so badly after such a crushing start to the game but ought to be proud of young rake Cam McInnes's efforts in scoring two tries and making a mountain of tackles with Damien Cook restricted to a short spell thanks to a concussion.

The match had started with Souths doing to Manly exactly what Canterbury did to them a week earlier – making ridiculously easy metres through the middle, trampling their way upfield with ease and scoring try after try at the back end of their sets.

No doubt they benefited from the return of Sam Burgess but it was the less-heralded forwards like Nathan Brown and Chris Grevsmuhl that did the bulk of the damage.

Hooker McInnes scored the first two tries of the match, each with an ease that should be cause for concern to Manly coach Trent Barrett. The first was a regulation dummy-half dart while the second was a dummy-and-go in front of what looked like a set defensive line.

Rookie pivot Cody Walker scored his first NRL try shortly after with a jagged run of his own to keep his side level with the clock at 16-0 after 16 minutes – a period in which Manly racked up the majority of their 24 first-half missed tackles.

But a curious momentum shift was triggered by a bumbling couple of plays by Souths from the restart to eventually fumble the ball back in-goal and concede a dropout.

Barrett brought some fresh legs onto the field early due to the defence his side had soaked up and the man in the spotlight, Dylan Walker, showed great speed and determination to score a solo try from 10 out to get his side on the board just inside the half hour mark.

A long-range line break from the next set through Brett Stewart, Steve Matai and Jorge Taufua set Manly back on the attack and they looked certain to score against a retreating defence out to their right but bench prop Siosaia Vave grubbered instead – though he forced a dropout it was very much the second best result for his team.

Manly continued to press and received a series of penalties – mostly for offside – late in the half as Souths scrambled but managed to get through to the break without further damage on the scoreboard.

A half-time rev-up failed to spark the Rabbitohs into life as Manly continued to dominate the middle of the field after the break despite consecutive short turnarounds over the past fortnight and remarkably – despite hardly touching the ball in the first 16 minutes – crept up to 55 per cent of overall possession midway through the half.

Souths were running out of energy and answers as Manly's fast ball-players – stand-in half Koroisau and hooker Matt Parcell in particular – caused massive headaches with footwork and dummies.

Koroisau sliced through in the 59th minute with a great dummy to get his side back within four points and from that point Souths were well on the back foot – but somehow managed to struggle through a series of Manly attacking raids, soaking up a few more goal-line dropouts along the way.

A few poor last tackle options from Manly's rookie playmakers proved costly but it wasn't for lack of effort, however some serious desperation in defence allowed the Bunnies to cling to a 16-12 win. 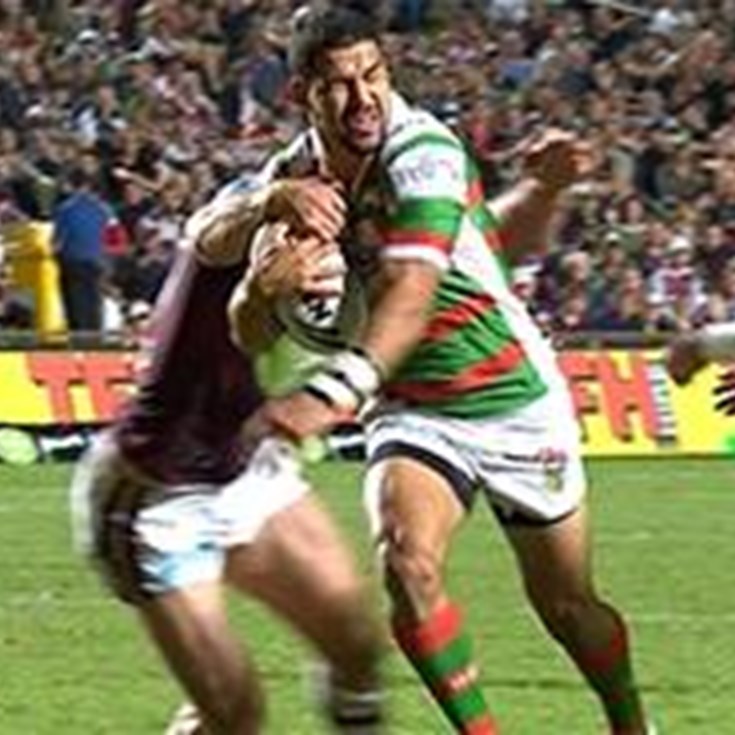