The Melbourne Storm have beaten a resilient Newcastle Knights side 18-14 in front of 11,443 at AAMI Park on Saturday.

A try to Richie Kennar in the corner with seven minutes remaining was enough to seal the win for the Storm, but it wasn't without a few nervous moments late in the game.

The Storm trailed by eight points with just over 20 minutes remaining, but tries from Kennar and Cooper Cronk turned the result around for Melbourne.

Draw Widget - Round 5 - Storm vs Knights

The Knights had the momentum in the opening minutes of the game before the match was halted following a hit by Richie Kennar that left Knights centre Sione Mata'utia in a bad way.

Mata'utia was helped off the field and would not return after failing the concussion test.

The Knights opened the scoring soon after, with Akuila Uate catching the cross-field kick from Jarrod Mullen and finding Jacob Saifiti near the try-line to draw first blood for the away side.

It took the Storm only five minutes to hit back, as Cooper Cronk regathered the ball after a mishandle from Will Chambers and muscled his way over the line to get the Storm on the board.

Those moments were a rarity as the first half was riddled with errors from both sides as fluent attacks were few and far between.

Hooker Danny Levi hobbled off midway through the half with a lower back injury, and like Mata'utia, was unable to resume for Newcastle, leaving the Knights with a depleted bench.

When Newcastle received a penalty within striking distance Trent Hodkinson opted for two with eight minutes to go in the half, and that was enough for the Knights to take an 8-6 lead into the half-time break.

The opening 10 minutes of the second half continued on from the first, with both sides trading penalties and errors.

The hosts had the line share of possession early in a bid to regain the lead, but were unable to take their try-scoring opportunities. Cronk and Kenny Bromwich dropped routine passes on consecutive attacking sets, which were met by groans from the passionate home crowd.

Their frustration only grew louder minutes later when Knights forward Korbin Sims snuck in behind Cameron Munster and stretched to ground the ball after a well-timed grubber kick from Hodkinson.

The halfback converted the try to give the Knights a 14-6 lead with 20 minutes to go.

Melbourne were under immense pressure, but some quick thinking from Chambers forced a goal-line dropout, which resulted in Cronk nabbing his second try of the game from the ensuing set.

Cameron Smith converted the try to bring the Storm within two points and set up a grandstand final 15 minutes.

A penalty against the Knights under the posts allowed for the Storm to level up the game through a Smith penalty goal.

Kennar would be the match-winner in the end, after a touch pass from Tohu Harris saw the winger find a clear lane to the line. 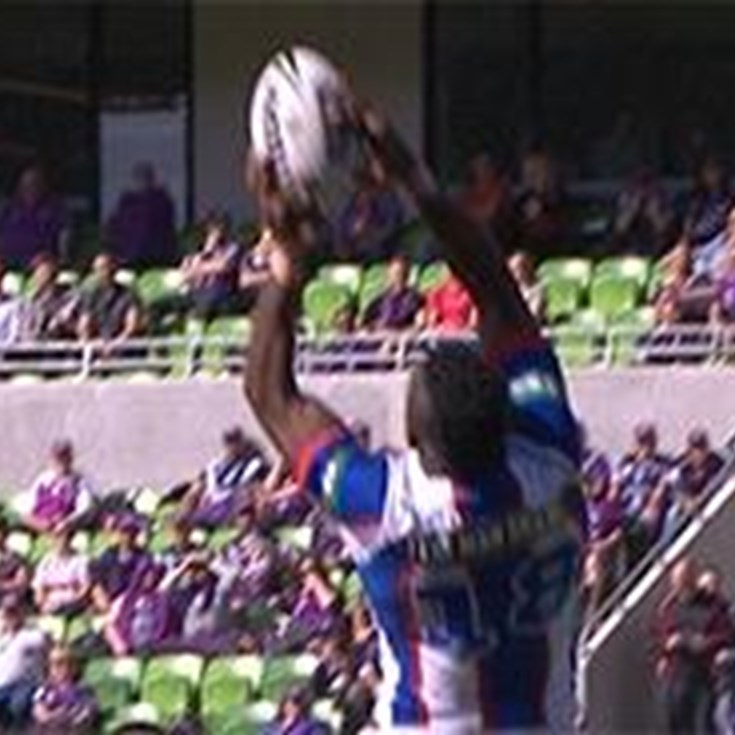