Roger Tuivasa-Sheck has come back to haunt his ex-Roosters teammates by scoring his first try as a Warrior in golden point extra time to secure his side's 32-28 win on the Central Coast on Sunday afternoon.

Tuivasa-Sheck's try came in the 82nd minute and was thanks to a memorable lead-up run from Tuimoala Lolohea, who after capturing a Jackson Hastings bomb, ran half the field with relative ease.

With the Roosters defence moving in on the winger Lolohea passed off to Tuivasa-Sheck, who was able to run the further 50 metres needed despite the persistence of Shaun Kenny-Dowall's desperate defensive efforts.

In a see-sawing game where the lead changed hands three times and was levelled another four the Roosters were eventually resigned to their fifth loss in as many games to kick off the season.

It didn't come without them showing good signs early however when Kenny-Dowall scored the game's first try four minutes in, with halfback Hastings's penalty goal 10 minutes later putting the Roosters ahead 8-0.

Momentum completely shifted for much of the remaining half once Tuivasa-Sheck had his say. His side step left Blake Ferguson grasping at air before the fullback threw a cut-out ball for winger Manu Vatuvei to cross for his side's first try.

Warriors captain Ryan Hoffman was very unlucky not to be awarded a penalty try in the 22nd minute when he was held back by Aidan Guerra, but the away side made up for it just six minutes later when Solomone Kata forced his way over from dummy-half.

Magic hands from Jacob Lillyman proved the impetus behind Shaun Johnson's first for the game in the 32nd minute, the five-eighth's second try coming three minutes later due to a memorable grubber back inside from a runaway Lolohea.

The Roosters got themselves back into the contest two minutes before half-time when Kenny-Dowall scored his second try to cut the deficit back to six points.

Scores were levelled in the 52nd minute when Hastings caused enough chaos to bring Sio Siua Taukeiaho underneath him to score, the Roosters back-rowers busting through three would-be defenders on his way to the try-line.

The Roosters hit the lead again two minutes later when a handy Kane Evans offload put Mitch Aubusson through a huge gap. The Roosters back-rower couldn't be chased down – not even by Tuivasa-Sheck – as he raced half the field to score.

Dylan Napa's knock-on from the pursuing kick-off saw Kata score his second of the game in the 58th minute to again level the scorelines. Hastings's penalty goal six minutes later however would again edge the Roosters ahead.

Johnson's 74th minute penalty goal levelled the scoreline for the fourth time in the game, eventually ensuring their eventual win was played out in golden point. 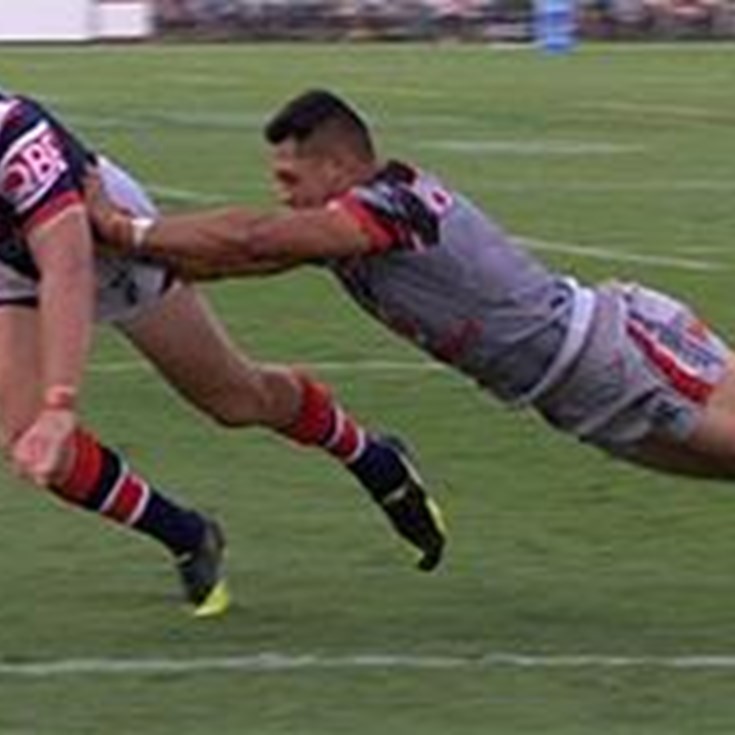