A perfect goal-kicking performance from Jamie Lyon helped the Sea Eagles to pick up their third win of 2016, as they outmuscled the Warriors 34-18 on Saturday night.

While Manly outscored the Warriors five tries to three at Mt Smart Stadium, Lyon’s 14 points off the boot proved crucial to the final outcome, ensuring the visitors always maintained a comfortable margin through the 80 minutes.

A game based around power running in the middle of the park saw Manly dominate the yardage battle, but while they led for the entire match they didn’t close the contest out until the final 15 minutes.

The Sea Eagles completed at 82 per cent, showing patience with the ball and taking full advantage of errors from the Warriors coming off their own line.

After starring in the match-winning play in golden point last week, Warriors winger Tuimoala Lolohea had a forgettable opening half hour, with his handling errors gifting Manly the ball for both their first-half tries.

Martin Taupau won’t score many easier than his eighth-minute try, scooping the ball up and strolling a few metres before Lyon converted from out wide.

Prop Josh Starling – who shifted to the bench in a late change – then went over for his first try in the NRL, showcasing some footwork to weave through the defensive line from close range.

After a first half where they restricted the Warriors to just a handful of attacking chances Manly leaked just before the break.

Roger Tuivasa-Sheck took a quick tap from a penalty inside the attacking 20 but was pulled down just short of the line, before some quick hands on the next play sent Blake Ayshford over.

Johnson converted and Manly led 12-6 at the break.

Four minutes into the second stanza Solomone Kata appeared – and was originally ruled to have – escaped the in-goal area following a Manly kick, only for play to be called back for a line dropout.

The Sea Eagles took full advantage of the ensuing possession, with Tuivasa-Sheck missing a desperate lunge for the ball following a Manly grubber and Steve Matai diving on the scraps.

When Ben Matulino was ruled to have made a second effort in a tackle on Matai eight minutes later, Lyon slotted a penalty to give Manly a 14-point buffer.

A string of penalties and handling errors from the Sea Eagles opened the door for the Warriors to come back soon after, with Issac Luke shooting over from dummy-half, but Manly would regain their composure and add further points via another Lyon penalty with 11 to go.

A late push from the Warriors saw Kata cross for his seventh try in six games, but it had no bearing on the final outcome as Tom Trbojevic returned serve with a four-pointer under the posts in the final minute to end the scoring at 34-18. 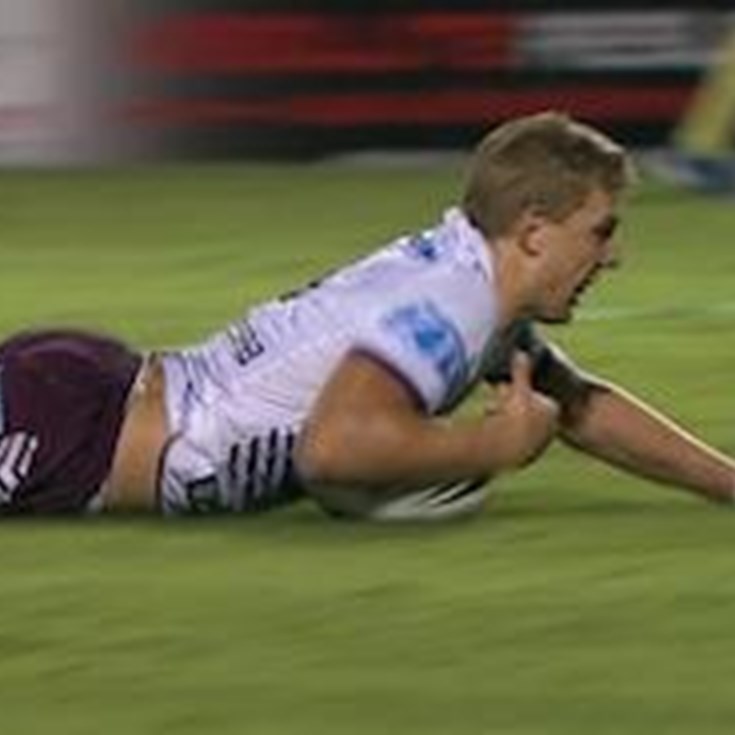