They were embarrassed last week by their winless crosstown rivals, so the very last thing a struggling South Sydney would want right now is a double date with the NRL's two best sides in foreign territory. Unfortunately for Michael Maguire's men that's exactly what they have in store, with their first stop against the Cowboys in Townsville on Friday night.

The Rabbitohs' last venture to North Queensland (Round 23, 2015) produced a rare two points, but it is safe to say that an entirely different Cowboys team awaits this time around.

After an explosive first two rounds that had the rugby league public ready to declare the Bunnies title contenders, they have fallen in three of the next four to remain in the top eight on mere for-and-against. Meanwhile, the premiers are humming in their pursuit for another top-four finish.

Centre Kane Linnett is unlikely to be fit before Friday, with Javid Bowen again named for his third NRL start. Patrick Kaufusi is 18th man.

For the visitors, halfback Adam Reynolds is a huge inclusion which pushes Cody Walker out of the side. David Tyrrell also comes back into the side as Damien Cook is relegated to 18th man.

Draw Widget - Round 7 - Cowboys vs Rabbitohs

Watch out Cowboys: Adam Reynolds is back and not a moment too soon, with his kicking game a valuable asset against an unrelenting yet patient Cowboys team that likes to build pressure and overwhelm opponents. Well-executed kicking can break the rhythm of a game, which would favour Souths as their opponent is probably the competition's best side in an up-and-down, set-for-set match.

Watch out Rabbitohs: Going back to their semi-final demolition of the Sharks, North Queensland has kept their opposition scoreless in three of their past four home games. Souths better be working on their attack this week after Maguire conceded his side was rudderless in Friday's loss to the Roosters, because the Cowboys are currently defending better than they have in the club's history. Reynolds may well be back, but the entire 17 will need to lift to have a genuine chance.

Key match-up: Jason Taumalolo v Sam Burgess. Sheer strength and running power won him the 2015 Dally M Lock of the Year, and Taumalolo has since gotten better. Clocking the most runs of all Cowboys forwards (91, equal with 80-minute player Ethan Lowe), he is now North Queensland's No. 1 go-forward option. Taumalolo averages 165 metres per game at a staggering 10.8 metres per carry, trumping the Bunnies' chief who averages 145 metres at 7.8 per carry over his four games this season (excluding the Round 3 game he left due to injury). Defensively, Burgess makes nine more tackles than his opposite and has the superior motor, averaging over 70 minutes per game compared with Taumalolo's 47.

The Cowboys' lock has gone for 200+ metres in two of his past three outings, and if he gets the better of this battle then North Queensland will remain undefeated at home.

The history: Played 28; Cowboys 13, Rabbitohs 14, Drawn 1. Souths taught them a lesson last time out, walking away from Townsville 31-18 winners in Round 23. Prior to that the Cowboys took four in a row, preceded by four for the Bunnies.

What are the odds: Sportsbet customers are liking the big price on offer for South Sydney, and the money is virtually split 50/50. They have been solidly backed at the line, where they’re receiving a fairly hefty start. Latest odds at Sportsbet.com.au http://www.sportsbet.com.au/betting/rugby-league/

The way we see it: There is little chance the Bunnies can turn such a disjointed performance into a win against the reigning premiers on their home patch in just one week, but stranger things have happened. The Cowboys' strong forward pack is always a good match for Souths, and they have far more strike on the outside. Cowboys by 14. 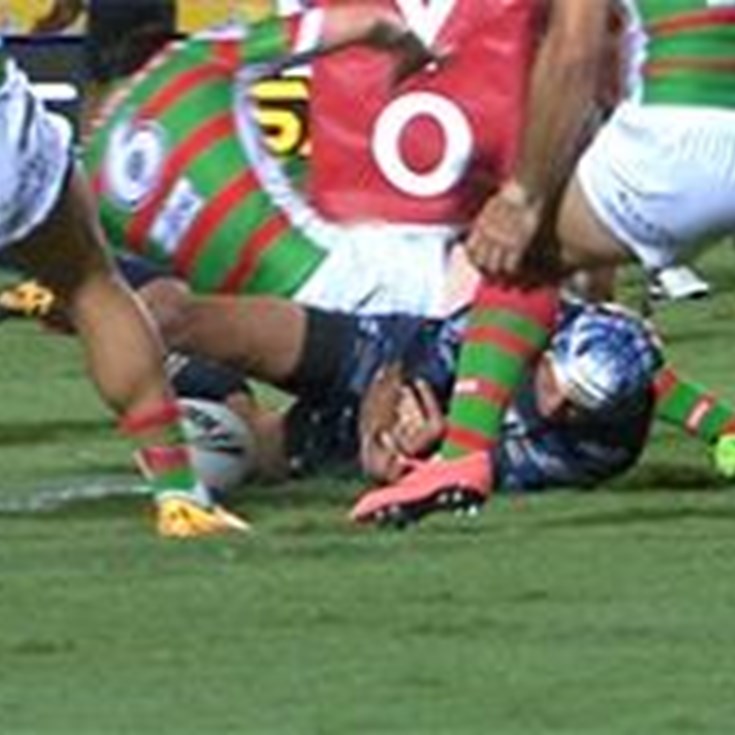 Brown grows up after ugly incident