Magic Milford mesmerises many, Boyd and Oates issue Origin reminders, Broncos create some history and everything that can go wrong does go wrong for the Newcastle Knights.

There are only two things faster than Anthony Milford’s footballing instincts right now and those are his right and left feet.

The Broncos five-eighth is hands down the most exhilarating attacking player in rugby league today and inside the first 32 minutes he had scored two tries, laid on another with a try assist and even popped up to take passes from Newcastle Knights players.

He scored the first hat-trick of his NRL career – taking his season tally to eight from seven games – and potted his fourth field goal of the season, captivating some of the most respected figures in rugby league.

“He’s got the footwork, he’s got the vision… He is the best player in the competition at the moment and by a long way. That first half was incredible,” said Braith Anasta in commentary for Fox Sports.

Boyd states his case to be Queensland No.1

Darius Boyd’s response may have been predictable but the fact that Kevin Walters asked the question may be the best indication yet of who will wear the Queensland No.1 jersey in this year’s State of Origin Series.

Boyd was again superb in a high-functioning Broncos attack, running for 94 metres with three tackle busts and having a hand in the first try for Corey Oates and Walters obviously likes what he sees from The Broncos No.1.

“Do you think you can fill the role for Queensland at fullback this year?” Walters asked as Boyd left the field at half-time.

“If you’ll pick me,” was Boyd’s simple response.

Oh brother, what a Knight

They created a nice slice of history with three sets of brothers taking the field against the Broncos but there was little more that went right for the Knights on Saturday night.

On the back of their first win of the season last Sunday they needed everyone at their best for the full 80 minutes against the competition favourites but inside the first quarter of the game they had invited Brisbane to assume control of the game and lost five-eighth Jarrod Mullen to friendly fire.

Mullen was trying to make a tackle when Jack Stockwell’s arm swung around and effectively knocked his teammate out of the game. Jacob Saifiti also had a tough introduction to Suncorp Stadium when he copped a heavy knock trying to take down Sam Thaiday but he was able to shake it off and stay on the park.

The loss of Mullen forced Sione Mata’utia to move in from the centres to take up a place in the halves and a reorganisation of the defensive line.

At half-time they lost hooker Tyler Randell to injury and winger Nathan Ross succumbed to concussion seven minutes into the second half and was unable to return to the field.

Prop Josh King was Ross’s replacement on debut, Tariq Sims was moved to the centres and no matter how hard they all tried they simply couldn’t stem the flood of Broncos points.

And to round things off Pauli Pauli was placed on report for a high shot on Joe Ofahengaue.

The retirement of Justin Hodges and long-term injuries to Billy Slater and Will Chambers has for the first time in a decade created selection headaches for new coach Kevin Walters but the Broncos behemoth might be the fast-acting aspirin he needs.

At 21 years of age you could argue he is too young for Origin football but at both ends of the field Oates is delivering the exact type of football needed in rugby league’s toughest arena.

Whether a flying leap to score in the corner or a tough run out of his own end that puts his team on the front foot, Oates deserves to have the front-running on Cowboys flyer Kyle Feldt for one of the vacant wing spots.

After a career first hat-trick against the Knights Oates now boasts 18 tries from his past 23 games and all told racked up 185 metres, three tackle busts and a game-high three line breaks in yet another dominant winger’s display.

Saturday night’s 53-point thumping was the first time the Broncos had posted 50 points since Round 13, 2012 but continued a long line of Newcastle thrashings at Suncorp Stadium.

Brisbane’s biggest ever win was a 71-6 shellacking of the Knights in 2007 and on two previous occasions they racked up a half century against the Novocastrians at home, Anthony Milford’s cheeky field goal with the final play an exclamation point on a totally dominant performance.

In addition to the points they scored, they kept a team scoreless for the second week in a row and the last time the Broncos did that in rounds 24 and 25 in 2006 they went on to win the competition. 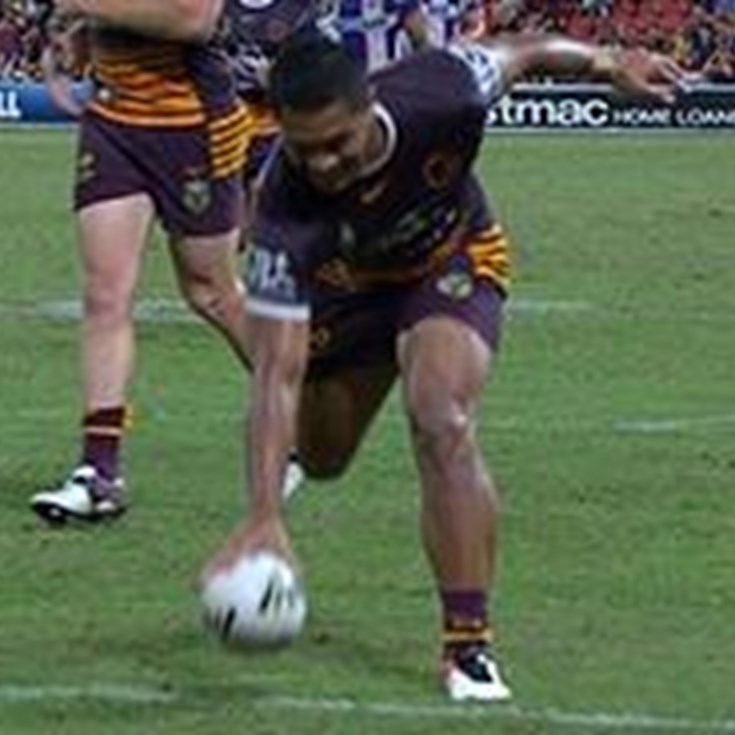