There was plenty of drama, controversy, injuries and some massive scores in Round 8 of the NRL Telstra Premiership.

The Raiders and Storm both had huge wins, the Bulldogs escaped with a golden point victory, the Sharks held on to deny the Panthers in another thriller and the Dragons just edged the Roosters in the traditional Anzac Day clash.

Here is a quick look at the main talking points from each match.

The Broncos made it five wins in a row with a convincing win over South Sydney at Suncorp Stadium. Adam Reynolds looks to have reinjured his jaw in the Friday night clash, while Sam Burgess was at the centre of a controversial incident involving a tackle on a prone Joe Ofahanengaue. Corey Oates had another massive game as his push for representative honours continues to gain momentum. Hymel Hunt looked to have suffered a season-ending pectoral injury, while Brisbane hooker Andrew McCullough will be out for up to six weeks with a knee injury after falling awkwardly in a tackle. Corey Parker became the most capped forward in the history of the game, surpassing Nathan Hindmarsh.

A Josh Reynolds field goal in golden point was the difference, as the Bulldogs edged the Titans. Gold Coast had their chance to win, but Tyrone Roberts's shot skewed wide and the Bulldogs marched up field and didn't waste the opportunity. The Titans were left ruing yet another slow start, again coming from behind to level the scores before eventually going down.

Josh Hodgson had another massive game, setting up three tries and four line-break assists in the Raiders' rout of the Wests Tigers. It was the Wests Tigers' sixth loss in a row. Jordan Rapana scored four tries in the demolition. It was an important win for Canberra after losses to Premiership heavyweights the Sharks and Eels in consecutive weeks. The Wests Tigers need to bounce back on Thursday night against South Sydney.

Corey Norman was sent to the sin bin with 14 minutes left on the clock and it was the turning point in an enthralling contest between two of the best teams in the competition. The Eels showed they can match it with the best sides, but the Cowboys came over the top in the last 10 minutes.

A length of the field try to Valentine Holmes inside the last 10 minutes looked to have secured victory for the Sharks, but the Panthers hit back with one of the tries of the season to give themselves a chance to go to golden point, but Jamie Soward's conversion attempt went wide and the Sharks held on by two points. It was the seventh game in a row for the Panthers decided by five points or less. The Panthers scored four tries to three, but goal kicking cost them dearly. Paul Gallen had his best game of the season, putting pressure on Australian selectors. Luke Lewis produced one of the biggest hits of the season when the Panthers telegraphed an inside ball to Matt Moylan. It was an absolute bell-ringer.

Daly Cherry-Evans made a surprise return from injury, but Manly were hit with more concerns when Brett Stewart (hamstring), Tom Trbojevic (ankle) left the field, while for Newcastle Peter Mata'utia's return to the Hunter short-lived due to a knee injury. Jarrod Mullen meanwhile left the field with a hamstring injury and early reports are that he could be out for some time.

Brayden Wiliame finally got his first win in first grade in his 14th attempt.

Jamie Lyon came up with one of the weirdest plays of the year when he attempted to bat back a kick-off, but only succeeded in hitting it away from his own players and the Knights scored a bizarre four-pointer.

The Dragons bounded out to a commanding 18-0 lead by half-time but could add only a penalty goal in the second half as the Roosters clawed back one, then two, then three tries to have all 34,483 fans at Allianz Stadium on the edge of their seats in a grandstand finish.

The Roosters were left ruing some important decisions that went against their side and Trent Robinson was very strong in the post-match press conference.

Gareth Widdop went on to be awarded the Ashton-Collier medal as Man of the Match.

The Storm raced to 10 points in the opening minutes with barely a finger laid on them, as the Warriors defence resembled little more that witches hats. The Storm had three tries disallowed and still piled on 28 first-half points in an opening stanza that also saw Blake Ayshford sin-binned for a professional foul. Worryingly Tuimoala Lolohea left the field in opening half with a knee injury, in a further blow to the New Zealand outfit after losing Roger Tuivasa-Sheck last week. Simon Mannering left the field early in the second half and didn't return with a mouth injury.

NRL Telstra Premiership Ladder after Round 8: 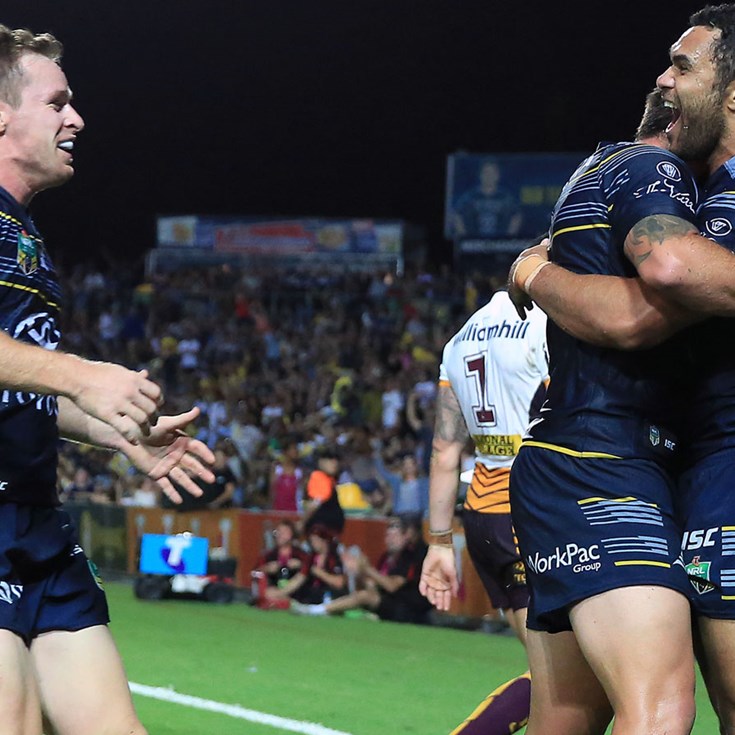