Bragging rights are at stake for a few players ahead of their respective representative camps when Manly take on North Queensland this weekend.

It's not as though Cowboys veteran and all-around tough nut Matt Scott would stoop to trash talk but he will be opposing fellow Maroons prop and former Kangaroo Nate Myles, while Kiwi enforcers Martin Taupau and Jason Taumalolo also face off.

Meanwhile Cowboys maestro Johnathan Thurston will look to outpoint Manly's halfback Daly Cherry-Evans. Cherry-Evans has been one of the NRL's premier halves over many years, but has fallen victim to Queensland's wealth of playmaking talent and has found a consistent spot hard to come by. With the likes of Michael Morgan, Anthony Milford and Ben Hunt emerging as superstars, there is a chance DCE may never get a game for Queensland again.

If that wasn't enough, Saturday night may get even more awkward… a week after the Cowboys cut Matthew Wright they may just meet him in Manly colours after Brett Stewart (hamstring) and flyer Tom Trbojevic (ankle) suffered apparent long-term injuries against Newcastle.

Coach Trent Barrett has named both men but unless he has Hermione Granger amongst his physio staff, their injuries will not to heal in time for the match.

Sea Eagles hooker Matt Parcell is also likely to come into the side after being named 18th man, while the Cowboys come in unchanged with John Asiata at 18th man.

Watch out Sea Eagles: The Cowboys are plus-83 in for-and-against over the past four weeks, with Thurston deferring to teammates Michael Morgan and Lachlan Coote more and more, as shown in his current Dally M points tally – he has just three points to his name while leader Josh Hodgson sits on 13. Both Thurston, who is not using as much gas earlier in the season, and those around him will benefit from this at the season's pointy end.

But this week is all about 'JT' as the Sea Eagles need their makeshift fullback – which could be Wright – to be on his toes and play great positional defence. Thurston's red zone kicking game is still the best in the NRL, so considering the number of attacking chances the forwards have been giving him lately, expect the champion half to force multiple goal-line dropouts. That is, if the Cowboys have not already scored earlier in the set.

Watch out Cowboys: Jamie Lyon's retirement announcement is timely seeing how much the home side needs to lift for this one. Cherry-Evans will be better for last week's run, but his organisational skill immediately showed upon his return from injury as Manly looked more orderly.

What they do have going for them is some serious footspeed out of dummy-half and first receiver either side of the ruck. If the Cowboys lack line speed and give the likes of Apisai Koroisau, Cherry-Evans or Dylan Walker time to move, they may well get burned.

Key match-up: Martin Taupau v Ethan Lowe. Lowe is a tackling machine; he will never back down from a challenge, and he has a big one on his hands this week. Taupau is the sparkplug of the Manly pack and needs to turn in a powerful performance like he did in Round 2 against Wests Tigers. He was so pumped up to play his old side that he broke the line three times off straight hit-ups that night, and Manly need that monster to come out a lot more to whip their other forwards into motion. The Cowboys top tackler (32 per game) against Manly's most destructive forward is one of the top sub-plots to this one.

The history: Played 25; Sea Eagles 15, Cowboys 10. North Queensland have won the past three meetings, while the Sea Eagles had won the six prior to that. Considering Manly's storied history, the Cowboys have probably punched above their weight in this matchup.

What are the odds: The Cowboys have been the best backed side of the round, and they hold 90 per cent of the money in head-to-head betting. Meanwhile, 70 per cent of the hold in margin betting is on North Queensland to win 13+ and Sportsbet have struggled to take bets on Manly. Latest odds at Sportsbet.com.au

The way we see it: As one veteran Manly leader arrives in Cherry-Evans, another departs in Stewart – who will need to wait a few more weeks for the two tries which will see him become Brookvale Oval's leading tryscorer. North Queensland are riding as high as they have ever been, while after high pre-season praise Manly are starting to warm up. However, they are nowhere near the Cowboys' level right now and with injuries to strike weapons Stewart and Trbojevic, this one is a slam dunk for the visitors. Cowboys by 16. 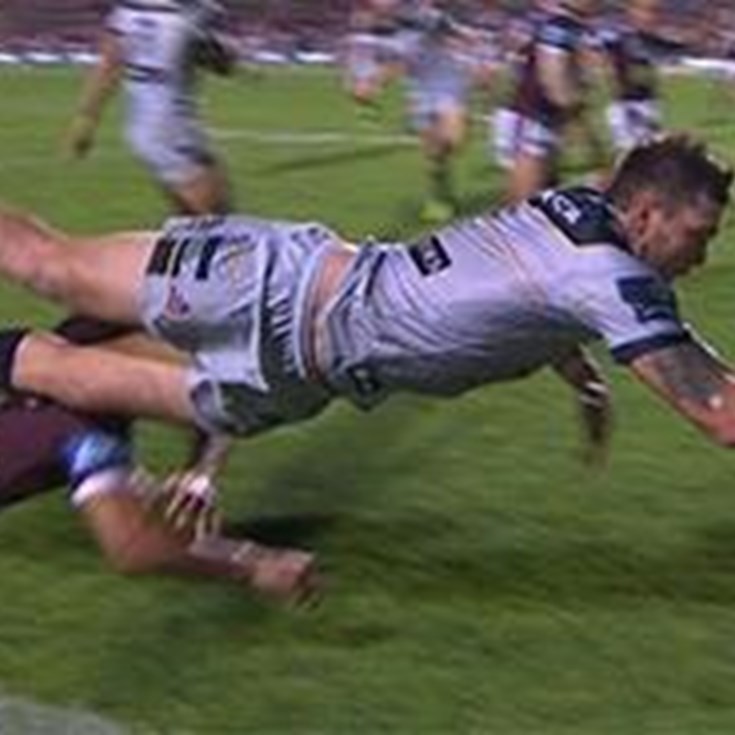 Barrett banking on Lyon to topple the kings of the north

Sea Eagles want to send Lyon out on top