The Penrith Panthers survived another nail-biter to edge the Raiders by a point in Bathurst on Saturday afternoon. Their last eight games have all been decided by five points or less. Here are five key points from their latest thriller.

Panthers too cool at the end

They've been on the wrong end of plenty of close games so far this season, but on Saturday afternoon, the Panthers were the side with the coolest finish.

While the Raiders missed a couple of relatively easy field goals, Peter Wallace nailed one from a fairly difficult angle to give his side the victory.

"He's kicked a lot of field goals in his time Pete so when I saw it (the ball) go back to him I thought he'd kick it," Panthers coach Anthony Griffin said.

Meanwhile captain Matt Moylan was happy his side was able to turn around momentum in the back end of the game.

"It was a bit scrappy," Moylan said.

"We didn't complete many sets that whole second half.

"Lucky enough we sort of swung that around at the end and knocked the field goal over."

Last week they put 60 points on the board in a game where they looked like they were men playing against boys, this time round the Raiders struggled to get the ball over the stripe, despite plenty of attacking opportunities.

While coach Ricky Stuart noted this, he was happy with the way his side fought back late.

"We didn't execute a few things as well as we can but the way we worked ourselves back in the game and got in a position to win was terrific from my point of view," he said.

Draw Widget - Round 9 - Panthers vs Raiders

While Anthony Griffin wasn't terribly pleased with his side's performance against the Raiders, he did find plenty of reasons to be happy with the defensive effort of his players, particularly considering it was a focus leading into the match.

"We came here today to defend a lot better, that was our focus all week," he said.

"And we had a lot of defense in us, otherwise we would have got beat today. We were very poor with the ball in that second half.

"We were hanging in games all year and we've had a lot of resilience defensively."

Stuart not happy with wall

Ricky Stuart wasn't happy with a number of on-field decision after his side's close loss, most notably the no-penalty call during Peter Wallace's game-winning field goal.

In that instance Paul Vaughan appeared to be impeded in his run to block the field goal, however the refs had another opinion.

"There's a rule in place where you're not allowed to have blockers to impede a player that is chasing to block a field goal," Stuart said.

"We had a player that was impeded by two blockers.

"We were impeded by a wall of players. That's a rule that you're not allowed to do anymore."

Hook not happy despite win

The Panthers allowed the Raiders back into the contest with a terrible run of errors in the second half, a fact that was noticed by their disappointed coach.

"It'll be nice to have another game after that one to try to play a bit better," Griffin said.

"If you just hand the opposition the ball every set after three tackles you're going to get points scored against you and that's what happened today.

"I always thought we'd win the game but I was disappointed in how we get to that position." 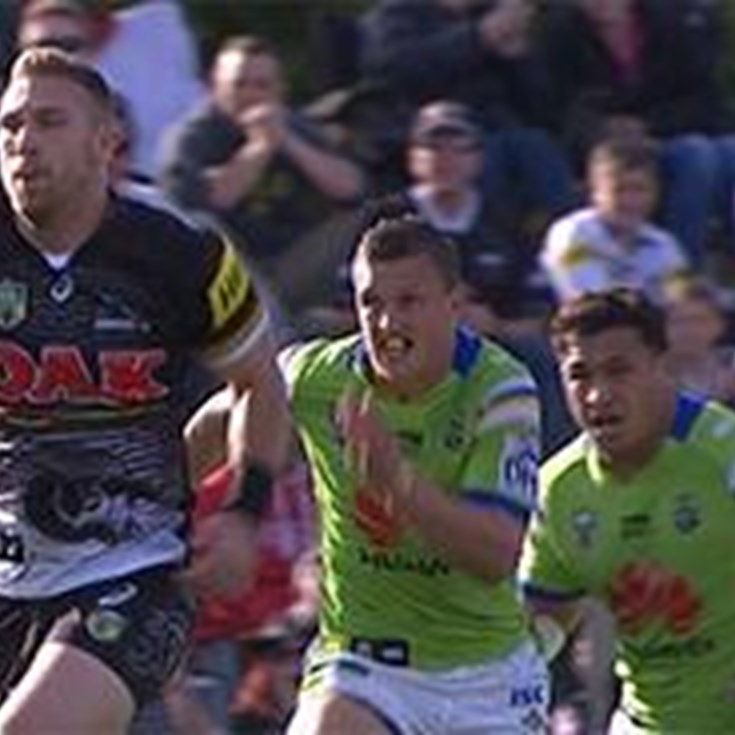