The only aspect of the Storm's thumping 38-0 win over the Titans not covered by the Olympic motto of 'Faster, Higher, Stronger' was the Cameron Smith smarts that continually pulled the Titans defence apart.

Melbourne mentor Craig Bellamy's 350th NRL game in charge was thrown into some kind of chaos prior to kick-off with three-quarters Richard Kennar, Young Tonumaipea and Marika Koroibete all ruled out with injury but he simply replaced them by big boppers who terrorised the Titans all game.

Whether it was Cheyse Blair racing 65 metres to score, Suliasi Vunivalu climbing high above Nathan Davis to score his third double in as many games or the giant frame of Nelson Asofa-Solomona crashing through defenders the Storm were dominant in all areas as they consigned Gold Coast to their fifth loss in succession and the first time in the Titans' history that they have been kept scoreless at home.

Draw Widget - Round 9 - Titans vs Storm

The Storm signalled their aggressive intent in the opening minutes with heavy shots on Titans playmaker Ashley Taylor following attacking kicks and continued to run roughshod over the Gold Coast defence, their tally for a week of football finishing at 80-0 across two games.

Their aggression spilled over midway through the second half when Kenny Bromwich was sin-binned for throwing a punch after Titans players objected to a late tackle on Tyrone Roberts and some push-and-shove developed into something a little more.

The Storm's first try was a fortunate one when a David Mead kick lodged in the midriff of Melbourne winger Cheyse Blair who raced 65 metres to score but from that point on the Storm dominated all areas of the game.

Taking full toll of the Titans' poor first-half completion rate of just 10 from 16 sets captain Cameron Smith engineered a fifth try in just three games for Fijian sensation Suliasi Vunivalu in the 26th minute and then a rare line break earned his team another penalty late in the count that led directly to a try for Tohu Harris.

Giant prop Nelson Asofa-Solomona continued the theme when he came onto the field late in the first half, busting through some ordinary Titans defence to charge into the back-field where he found Cooper Cronk backing up on his inside to score his fifth try of the season for a 20-0 scoreline at the break.

The body language of the Titans wreaked of defeatism midway through the first half and despite some better intent in the second term they were unable to breach the Storm's defence and again conceded easy tries through the middle of the field.

Despite being down to 12 men with Bromwich in the sin bin some clever interplay between Smith, Jesse Bromwich and Cameron Munster carved a gaping hole through the middle of the field for Cronk's second try and Munster beat three tacklers on tackle one from deep inside his own half to lay the groundwork for Blake Green's try eight minutes from full-time.

Titans coach Neil Henry omitted David Shillington, Anthony Don and Cameron Cullen prior to kick-off with their places in the team going to Lachlan Burr, Nathan Davis and Ashley Taylor who was returning from a rib injury. 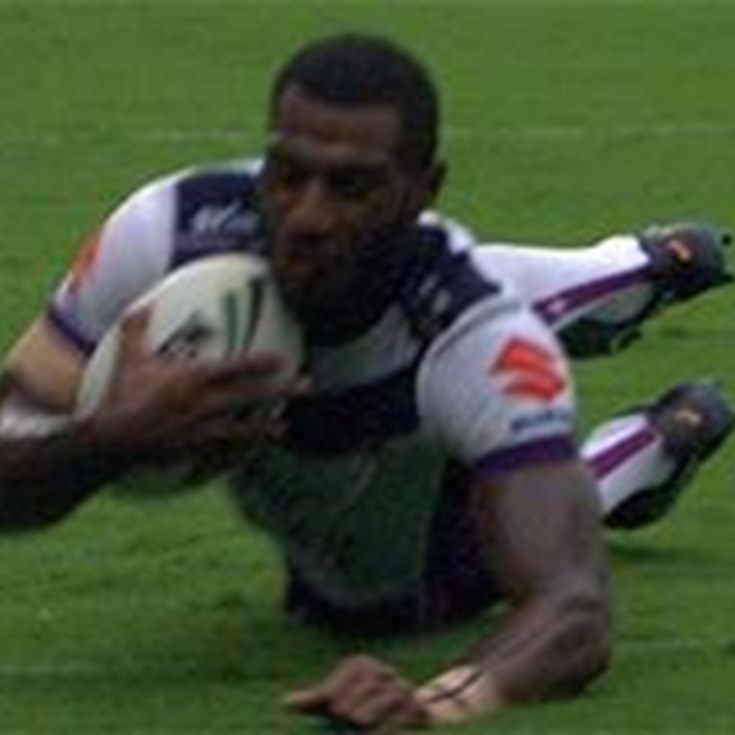