Mixed fortunes for James Maloney, new Blues blood stake their claims, Brad Fittler's approach flies in the face of convention and country folk show their support for what is supposed to be a dying concept.

If the AAMI Country-City clash is no longer a genuine Origin selection trial then someone forgot to tell 34 players on Sunday who were intent on impressing Blues Origin coach Laurie Daley sitting in the stands at Scully Park.

It was 'Generation Next' on show in front of a capacity crowd in Tamworth and while Origin incumbents sat in their lounge rooms watching the action unfold former Blues coach and Channel Nine commentator Phil Gould posed the question: "We've lost nine of the past 10 series and we lost the last game 52-6; what are we holding on to? What are we holding on to?"

Former Kangaroos winger Josh Mansour busted through the 200-metre mark and scored a try as his City compatriot Aaron Gray scored four tries on the other wing; Bryce Cartwright terrorised the Country defence, Jack de Belin made big metres and a mountain of tackles and Tyrone Peachey covered just about every position on the field.

Daley said pre-game that he had a fairly settled idea of what his team would look like for Game One; he may have left Tamworth with more questions than answers.

It was billed as James Maloney's chance to prove that there was at least one solution to New South Wales's troublesome halves pairing and although he finished with two tries it was something of a mixed bag.

The Country skipper's first kick of the game was well off target but he soon warmed to the task and Fittler's concern of what a polished Maloney kicking game would mean to his team started to come to fruition.

He earned a repeat set early, was let down by a poor kick-chase from his teammates on another and forced City fullback Clinton Gutherson to bat one dead as Country piled on the pressure but he was also guilty of gifting City seven-tackle sets with balls that ran dead over the in-goal.

His combination with Jack Bird and Boyd Cordner was a bright spot for Country and he helped to bring some respectability to the scoreline with two tries in the final seven minutes and while his goal-kicking wasn't needed remains an important string to his bow.

His form for the Sharks has been excellent all season but it will need to continue for another month to secure himself a place in the Blues team for Game One on June 1.

City captain Chris Lawrence let the cat out of the bag in the post-game press conference; the City team didn't have any structures.

"Don't say that," was coach Brad Fittler's quick retort but it was obvious after they withstood Country's initial onslaught that the City team had been allowed to simply play football.

Like the Pacific Tests the night prior where passion replaced completion rates, the City team showed a refreshing willingness to chance their hand and it paid off handsomely as they piled on eight tries with a handful of kids who had barely played much first grade.

"We got some quick play-the-balls and we played off that. Guys were pushing into holes and getting offloads and playing off that.

"A lot of where we made our yards and made our breaks were just off playing footy."

Fittler said that the intercept by Ryan Matterson that led to City's first try in the 21st minute was a result of a player simply responding to what he sees in front of him.

"Everyone seems to defend the same and I don't understand why," said Fittler, who guided City to their first win over Country since 2012.

"In watching the replay it was obvious; it was there to be taken and I see a lot of them week in and week out and that turned the whole game, there's no doubt about that."

How can you cancel a sell-out?

If you listen to the naysayers there is only one Country-City fixture still to be played in 2017 before the concept gets consigned to the record books but anyone present on Sunday could only assume its importance will be retained.

More than 8,000 people poured into Scully Park which represents one-fifth the population of Tamworth or the equivalent of 858,600 people cramming into ANZ Stadium in Sydney to watch a game of rugby league.

The two teams revived a tradition that has been lost at the top level for 50 years by shaking hands prior to kick-off and while CRL boss Terry Quinn joked that next year the game was going to Broken Hill, Country forward Tariq Sims pleaded for its retention.

"It would be devastating, and not only to the people of the towns that we go to," said Sims, who has played for Country in Albury, Mudgee, Coffs Harbour, Dubbo, Wagga Wagga and now Tamworth.

"I hold this jersey pretty close to me, it was my first senior rep game and a lot of legends and great players have pulled on this jersey before us.

"For it to get taken away would be a shame for the game and the people of the bush."

The Country pair were playing in an unfamiliar position while one of the City wingers had hoped to spend more time in the centres but the contrasting fortunes of the four wingers highlighted what a specialist position it is.

Kane Linnett hasn't played a first grade game on the wing since 2012 and Isaah Yeo is unlikely to ever again be away from the back row and they were tormented all game by Aidan Sezer's spiralling torpedo bombs.

In the City camp, Josh Mansour moved closer to a maiden Blues jersey with a try in another powerhouse performance while Aaron Gray's four tries on the right wing came courtesy of an injury to David Nofoaluma five minutes into the game.

Gray had spent all week playing in the centres and the South Sydney winger conceded that he was looking forward to playing more time in his preferred position.

"I was getting back to my preferred position and looking forward to that but it wasn't to be," he told NRL.com.

"I just had to do my job on the wing and I thought I did it.

"Nothing really changed when I got moved out there, I just had to fill in on the wing and do my job." 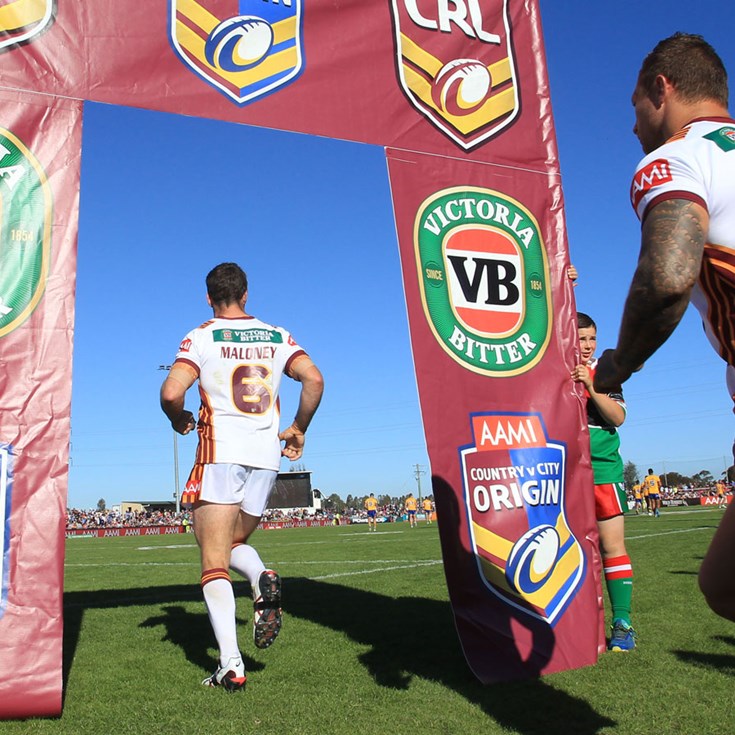