The Rabbitohs have made it back-to-back wins after overcoming a horrible error rate to outlast the Dragons 34-24 at ANZ Stadium on Thursday night.

All the Burgess brothers contributed heavily to the error rate on an off night for the clan but a superb all-round kicking game from NSW Origin hopeful Adam Reynolds proved the difference, laying on three tries and several line drop outs with precision kicks.

Stand-in fullback Cody Walker had an impressive game given the circumstances, managing the extra running and supporting well while also scoring an important solo try just before half-time.

The Dragons – and NSW – face a nervous wait to see if there is any serious damage to the left elbow of Josh Dugan, who required attention after Paul Carter landed awkwardly on his arm as both were jostling for a ball in the Dragons in-goal.

Carter was a terrier all night, getting in the Dragons' faces and while he sailed close to the wind at times his high-octane game was a big contributor in the victory.

For the Dragons, Jake Marketo had a strong game after being called into the starting line up while centre Euan Aitken was arguably his side's best, causing big problems with his bustling running game and laying on a late try for Will Matthews.

Draw Widget - Round 11 - Rabbitohs vs Dragons

The game had started in bizarrely scrappy fashion for the home side who repeatedly dropped it coming out of territory to give their opponents a leg up and were lucky to concede only one try in the opening 15 minutes, which came in just the third minute (as a direct result of their first drop) when Jake Marketo crashed over.

Bryson Goodwin was also lucky to stay on the field after holding back Euan Aitken chasing an attacking kick in the 10th minute and it proved crucial minutes later when the Rabbitohs finally put in a good running set and Goodwin scored after stepping through a few defenders close to the line in the 13th minute to level the scores.

Tim Lafai scored a length of the field try against the run of the play from a quick 20-metre restart after a Reynolds grubber just trickled dead after deft lead-up work from Josh Dugan, while there were also two penalty goals from Gareth Widdop in the half.

Given some of the sloppy play he'd seen, Souths coach Michel Maguire would have almost been relieved to only be down 12-4 at the break but instead a sublime Greg Inglis cut-out to Dane Nielsen in the 33rd minute narrowed the gap to four, then a brilliant Cody Walker grubber to himself 30 seconds from the half-time siren clinched an unlikely 14-12 advantage at the break.

Having completed just 12 of 17 sets in the first half, Souths started the second in the worst possible fashion when George Burgess lost it in the first set after the resumption and a penalty against his brother Sam for a second effort shortly after allowed Widdop to equalise with a penalty goal.

Souths reclaimed the lead shortly after when Goodwin batted back a nice Reynolds cross-field bomb for Kyle Turner to score but the Dragons refused to go away and when Kalifa Faifai Loa showed far more desperation than opposite winger Dane Nielsen to get to a well-weighted Josh McCrone grubber the Red V got back within two points with 25 to play.

A curious decision not to penalise Souths when a tackled Josh Dugan was dragged across the turf on his belly into touch – instead the home side were awarded a scrum – soon got uglier for the Dragons custodian.

Trying to touch down on a Souths grubber to defuse a try, Dugan had Paul Carter both land on his arm causing injury and also be deemed to have grounded the ball rather than Dugan, with the try taking Souths to an eight-point lead.

Reynolds effectively sealed the win with another precision kick to set up Goodwin's second try – the third he had created off his boot – and converted for a 32-18 lead.

Great evasive work from Aitken to get into space and pass to a supporting Matthews closed the margin to 32-24 in the 78th minute before Reynolds added two points – bringing up 800 career points in the process – with a last-minute penalty goal. 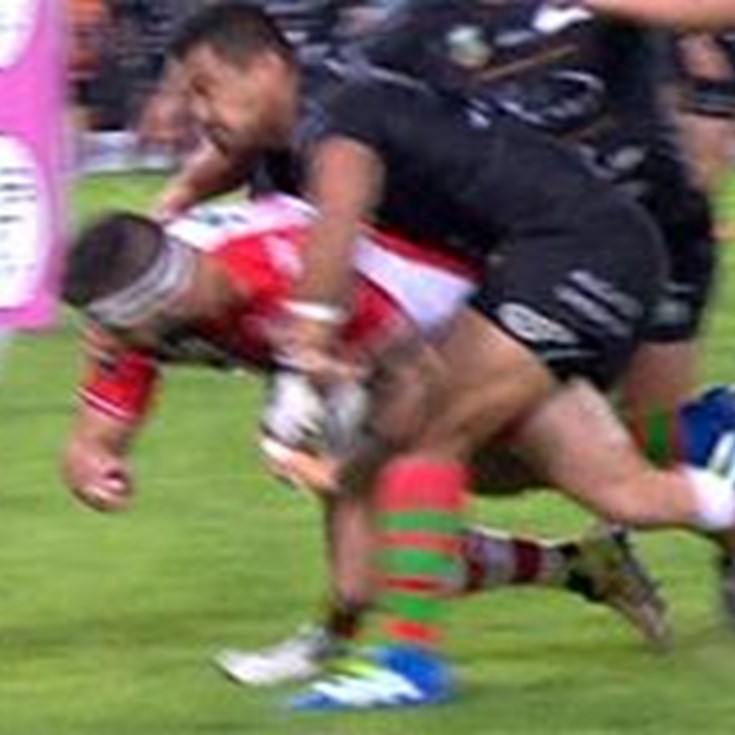