Parramatta's season is all but over after going down to the high flying Storm 18-6 at Pirtek Stadium on Monday night.

The win is Melbourne's fifth straight and boosts them back into a share of the competition lead alongside the Sharks, while the Eels would need to win a miraculous 12 of their final 13 games (assuming the loss of 12 competition points) to feature in the finals.

The return of Kieran Foran after a month out attending to personal issues could not spark the Eels into life; though Foran kicked well and had some nice touches there were also signs of rustiness.

The big concern for Storm coach Craig Bellamy is a hyper-extended elbow to fullback Cameron Munster, who they can ill afford to lose for any extended period given the massive injury toll among outside backs.

Former Eel Ryan Morgan made a winning start to his Storm career though was mostly quiet on the night against his former teammates.

The early grind of the game was marked by a flat Eels side giving up the ball when in range of their opponent’s line, and the Storm kicking early to turn the Eels back three around and play territory.

It didn't take long to pay dividends as Melbourne's Fijian winger Suliasi Vunivalu outshone his more storied counterpart Semi Radradra to cash in on a short side overlap and neat Cooper Cronk cut-out pass with Radradra having charged in from his wing to mark centre Ryan Morgan.

There was a no-try call against Cronk shortly after for having pushed a defender out of the way chasing his own attacking grubber while the Eels lost a try to Brad Takairangi shortly after due to a knock on from Michael Gordon in the lead-up.

The second try of a low scoring half eventually came on the Storm's other flank when Marika Koroibete found himself all alone in acres of space to mark a Blake Green chip out wide.

The Storm almost had their third try on the stroke of half time when Dale Finucane crashed over but the bunker correctly ruled he hadn't managed to get the ball down under attention of the defence and Smith’s two missed conversion left the margin at 8-0 at the break.

The Eels showed better intent after the break and the ledger was squared somewhat by an early injury to Storm fullback Cameron Munster, who bravely battled on after hyper-extending his elbow in the 45th minute.

Semi Radradra – who for the most part had an outstanding game, particularly under the high ball and with dangerous early set hit-ups – looked frustrated at times, once being held up in-goal and occasionally forcing ill-advised offloads to concede possession.

He had a good contest on that edge with opposite man Vunivalu, particularly in the air at both ends of the field, and it was the rookie who earned bragging rights with his second try – though this came next to the sticks, running onto a Smith short ball in the set after his team forced yet another drop out.

There was a question mark over the grounding with the ball being grounded short and sliding over the line but momentum was ruled to have slid the ball in-goal and at 14-0 after 63 minutes the Storm were all but home.

Cheyse Blair's try out wide – yet again in the set following a goal line drop out – sealed the deal in the 70th minute, though it continued skipper Cam Smith’s unhappy night off the kicking tee with his third miss from four attempts.

Origin-bound centre Michael Jennings scored a consolation try from a Foran grubber in the 79th minute to at least avoid the ignominy of a loss to nil but it did little to stop the 8,941 fans going home disappointed. 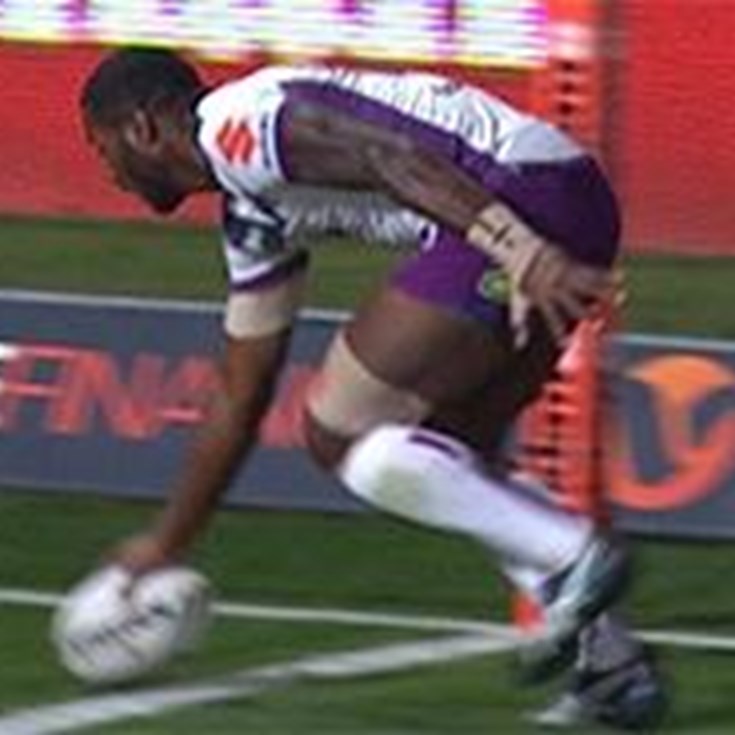