Star Maroons centre Greg Inglis has laughed off the suggestion that a bruised hip could keep Johnathan Thurston from playing a 34th consecutive game for Queensland next Wednesday night following the team's first training run on Thursday morning.

While all members of the squad took part in the session Thurston did skip some of the tackling drills but ran freely and did plenty of kicking practice, showing few ill effects from the hard knock he copped from Queensland teammate Josh McGuire in the Cowboys-Broncos classic last Friday night.

It wouldn't be a Queensland Origin camp without an 'injury scare' of some sort but Inglis rejected the notion that it in any way would put Thurston in doubt for Game One of the 2016 Holden State of Origin Series at ANZ Stadium.

"It's 'JT', he's come back from worse things than that.

"I've been in camps where he's been in hospital and come out the day of the game and got man of the match.

"JT is experienced enough and he'll be right to go next week."

Injured Storm fullback Billy Slater is in camp with the Maroons as one of Kevin Walters' assistant coaches this week and said the fact that Thurston was able to complete the majority of the session was a good indicator six days out from Origin I.

"Obviously he is still a little bit restricted but we're still a long way from game time," Slater said.

"The fact that he is out on the field at this time of the preparation is a good sign. I don't think we'll have a problem with 'JT'."

Fellow Maroon Corey Parker was on the field at Townsville last Friday when Thurston dragged himself from the canvas after the McGuire hit to kick the winning field goal from the very next play and said the record holder for the most consecutive Origin matches played is "too tough for his own good".

Prior to kick-off Parker gave a 'thumbs up' signal to his good friend in what was Thurston's 250th game for North Queensland and said the way he finished the game is typical of how he has approached his entire career.

"He's probably too tough for his own good to be fair," Parker told the Big Sports Breakfast.

"Josh McGuire didn't miss him and he did cop a whack but it's just his willingness to compete at crucial times and he certainly did that the other night.

"He copped a whack and then a couple of plays later he was having a shot at field goal.

"He's obviously first and foremost a good mate of mine and those milestones are hard to get. To do it for one club which he has now done is certainly very special for him and his family and all involved so there's no harm in acknowledging that before a game." 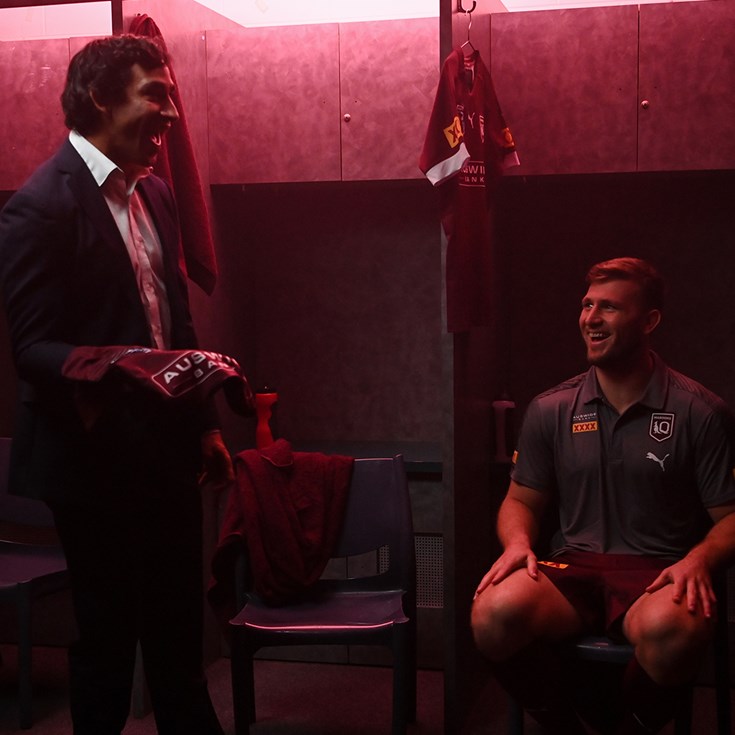