Sam Kasiano says his Bulldogs were "embarrassed" by the Raiders when they last played in Round 5 and is keen to get one back on them this Sunday afternoon.

The Raiders' 22-8 win seven weeks ago was the first taste of NRL football at Belmore Sportsground – the Bulldogs' spiritual home – for 2016 and one loss Kasiano is out to avenge.

It won't come easy for the Bulldogs considering Josh Jackson and David Klemmer are unavailable following their New South Wales selection for Origin I.

The Raiders on the other hand will only be without Josh Papalii with coach Ricky Stuart naming his strongest side in months following the return from injury of Sia Soliola (arm) and Shaun Fensom (shoulder).

"It was embarrassing for them to come into our backyard and give it to us. But oh well, we have moved on and it's time to get one back this week," said Kasiano, who has been cleared to play after suffering a concussion against the Roosters last weekend.

"We just want to be more consistent and we're desperate to keep our winning streak alive. It's going to be tough without [Jackson and Klemmer]. They have been a big influence for us and a big part as to why we have been playing so good.

"The Raiders have a massive pack and a very physical one too. We just have to aim up in the middle. They did a job on the Warriors last week and they did a job on us when they came here so hopefully we can return the favour."

With Danny Fualalo and Adam Elliott named to fill the void of the Bulldogs' Origin representatives, Bulldogs skipper James Graham said the whole team had to lift to make up for the missing Origin stars against the Raiders.

"It's not like we're going to another player and saying 'right Klemmer is missing, you need to do exactly what he does'," Graham said.

"Klemmer, Josh Jackson and Josh Morris – if he plays – bring plenty of unique things to this team and I don't think it's about replicating that.

"We have to collectively as a group take on their workload and match the energy these two or three guys usually bring to this team."

Kasiano's biggest worry however remains the cold Canberra conditions with it expected to be only 11 degrees come kick-off at GIO Stadium.

"I've struggled to get out of bed lately, so lucky it's a 4pm game hey? Not a 7pm game," Kasiano laughed. 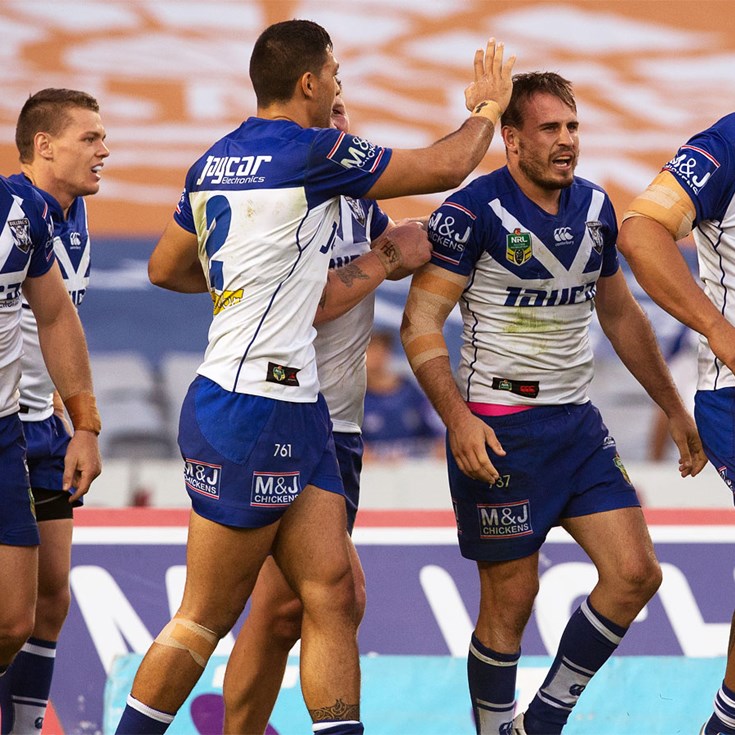 Bulldogs start fast to down Roosters

Sibling rivalry to spur on the Garveys