A three-try burst in the space of 11 minutes has propelled the Canberra Raiders to a crucial 32-20 win over the Bulldogs at GIO Stadium on Sunday afternoon.

The Bulldogs looked to have been in cruise control with a 20-10 lead approaching the final quarter of the game, but tries to Joseph Tapine (in the 58th minute), Edrick Lee (65th) and Sia Soliola (69th) turned the game on its head before Tapine forced his way over at the death to seal the result.

Canterbury's big men were unstoppable at times with Greg Eastwood, James Graham and Aiden Tolman all running for over 200 metres while every member of Canberra' back five cracked triple figures in terms of yardage gained.

The win moves the Green Machine into sixth position on the ladder, just one point behind the Bulldogs who were without Josh Morris.

The Bulldogs centre was a late withdrawal as he was drafted into the NSW Blues side in place of the injured Josh Dugan. His replacement, Reimis Smith, made the most of his opportunity, scoring a double on his NRL debut.

Draw Widget - Round 12 - Raiders vs Bulldogs

Smith will never forget his first touch in the NRL, finishing off some nice work by Moses Mbye and Greg Eastwood on the inside to score barely six minutes into his first-grade career.

His afternoon became twice as memorable 20 minutes later as the Bulldogs winger punished a Jack Wighton error for the second time to make it 14-4 courtesy of a Harbour Bridge pass from Moses Mbye.

The sides had earlier traded tries with some quick thinking by Curtis Rona out of acting half setting up prop Aiden Tolman for a rare four-pointer, before the unstoppable duo of Joseph Leilua and Jordan Rapana combined to put the Raiders winger over for his 10th try of the season.

The blue and whites should have extended their lead before the break but instead had their advantage sliced when a Jarrod Croker interception turned defence into attack; one play later Leilua strolled over to make it 14-10 at half-time.

The margin ballooned back to 10 points just five minutes into the second half when Mbye fooled the Raiders with a big dummy and left-foot step to score under the posts.

The Bulldogs nearly added to their lead through Smith but an Eastwood forward pass denied the 19-year-old a dream hat-trick on debut.

That missed opportunity proved a turning point as the Green Machine struck twice in the space of four minutes to incredibly draw level with 15 minutes to play.

Joseph Tapine put on some footwork close to the line to step through some feeble defence to score his first try for the Raiders before Wighton recovered from an error-riddled first 40 to set up Lee for a breathtaking long-range try.

The Raiders could have had another after five-eighth Blake Austin put on a trademark show and go but was somehow dragged down a blade of grass short by Adam Elliot.

It mattered little as Sia Soliola got one on one with a defender to barge over in his first game back from a broken arm before Tapine put the icing on the cake to cap off another lengthy Croker break. 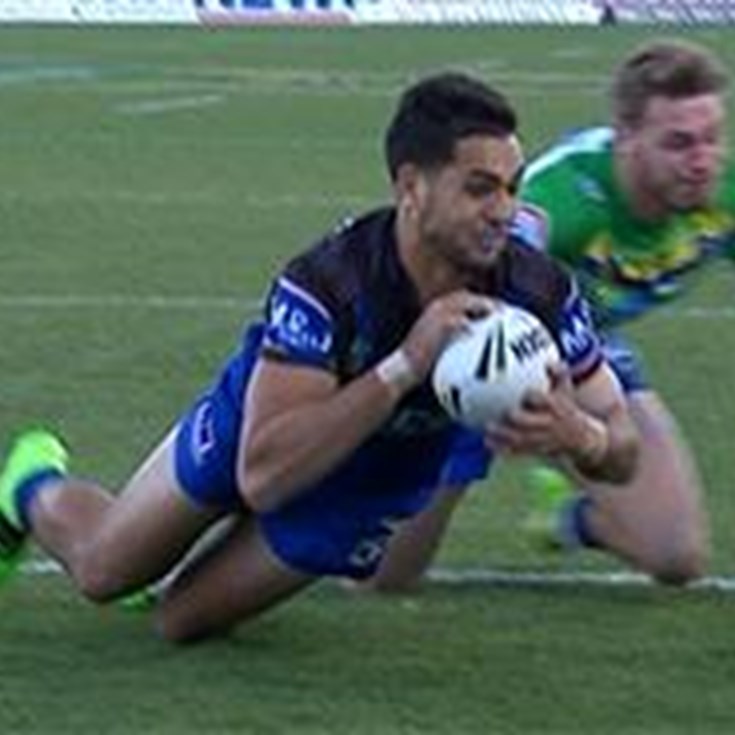