Eels utility Bevan French had to overcome an injury-riddled season to make his NRL debut in Parramatta's 20-18 win over the Knights on Monday night.

After being one of the breakout stars of the Auckland Nines – where he was picked in the Team of the Tournament following a record eight-try haul – French's season was quickly marred by rugby league's harsher realities.

The Tingha Tigers junior sustained a hairline fracture to his right hand in Round 1 of the Holden Cup season. Then, one game after returning from his first blow, French suffered a dislocated elbow which saw him miss another month.

With his NRL debut one of just a half dozen games he has played this year, French still managed to earn plenty of compliments from Eels coach Brad Arthur at full-time.

"We have always known that some blokes are just footballers and Bevan is one of them," Arthur said.

"He still has a lot to learn and it will take some time but he did well for us."

For French, it was a dream come true.

"It was a big night of course. I've been dreaming of making my NRL debut since I was five when I first started playing football and I'm glad to get the opportunity to do so. It's all I ever wanted to do growing up and I'm grateful for it," French told NRL.com.

"There were obviously nerves there but I knew the players I had around me were only going to help me. I can't describe the feeling really. I just love playing footy."

French is the first to admit he never expected his NRL debut so soon after his show-stealing performances across the ditch in February.

The 20-year-old nephew of Dragons legend Nathan Blacklock said the players in front of him in the Eels pecking order suggested a first-grade debut was a long way off.

"Looking at the Eels squad, I knew I would have to keep chipping away at it and it would eventually come. I didn't expect it to come around so quickly though," French said.

"It was very physical out there and very fast. I was blowing after the first 20 minutes so it was a very tough hour after that."

French's try midway through the second half was important in the context of the Eels' win over the Knights but it would've been all in vain if not for his try-saving tackle on Newcastle's Nathan Ross in the final two minutes.

As Ross went across in a bid to score what would have been his second try of the game French was not only able to get underneath the Knights centre with his legs but also force an error.

"I won't be ever forgetting that. It was so good," French recalled.

"I remember sliding in underneath and I was pretty confident about it too. I told the boys straight away I was under him and it worked out for the best."

Draw Widget - Round 12 - Knights vs Eels 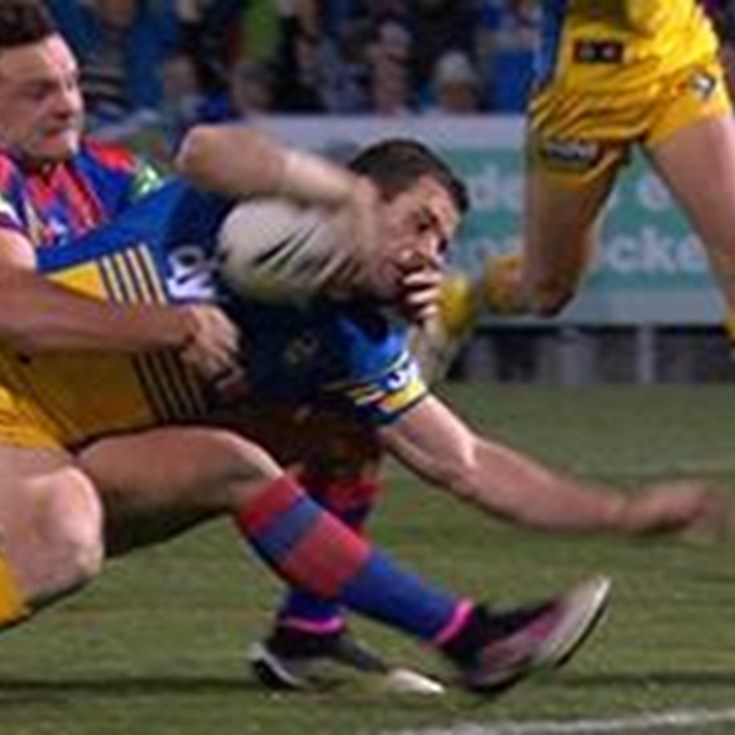