After bouncing back from his recent demotion from the NRL team by helping his team to their third win of the season, proud Rooster Jackson Hastings says while he can't afford to worry about the rumour mill, suggestions he was at loggerheads with coach Trent Robinson were the hardest to take.

During his two-week spell with the Wyong Roos, Hastings had to not only worry about showing the sort of form and commitment that would convince Robinson to put him back in first grade but also about varying reports that had he and Robinson on poor terms or that he was facing a mid-season move to rival clubs including the Eels.

Jackson was heavily praised by Robinson following his measured kicking game that was instrumental in helping set up a 32-18 win over Wests Tigers on Sunday afternoon and, addressing media afterwards, had nothing but praise in return for Robinson.

"The couple of weeks that have had have sort of been blown up by the media and sort of questioned our relationship but we've got a really good relationship and he's got a lot of trust in me to put me in tonight and I wanted to repay the faith," Hastings said.

"He made a decision to drop me and I took it on the chin… I went back to the Wyong Roos and did my absolute best and got rewarded with a spot back in first grade. I'm just going to keep turning up to training and working hard and just keep trying to make that 17 every week."

Hastings tried not to read what was being said but admitted it could be difficult to avoid when it was everywhere you turn.

"You try not to read into it too much but when it's hitting you in the face constantly like that it's a bit hard. The thing that I was unsettled at the club or that I didn't get along with the coach, that hurt me the most because I've been here since I was a 16-year-old kid and me and Robbo have had nothing but a good relationship," he said.

"Every player gets dropped once or twice in their career and I took that on the chin and he was really positive in his message and the way he delivered that."

He added he'd have preferred his recall to be based purely on form rather than as injury cover for senior half Mitch Pearce but was prepared to take every opportunity that was presented.

"I would have rather all the boys were healthy and force my way back in but I got that opportunity when Mitchell got injured during the week. I just wanted to go out there and grab it with two hands and most importantly win the game and we were able to do that," he said.

Asked whether he had ever needed to clear the air with Robinson, Hastings said there was no point as they spoke all the time anyway.

"We had a couple of honest discussions and we both walked out the door smiling so that's always a good sign. He's got my back and I've got his and I think that showed tonight on the field."

Rather than being on the lookout for a new club, Hastings plans to see out the next year-and-a-half of his current deal then hopefully stay at Bondi past that.

"I love this club. All the rumours saying I was going to every different club was laughable. I've still got another year after this on my contract so I'm not going anywhere... this is where I'll be staying," he said.

"I want to stay here as long as I can. I've got a really good relationship with a lot of people here and I'm really proud to wear this jersey. Every time you run out it's a special occasion, especially in a Roosters jersey, there's a lot of history behind it and this is where I want to stay." 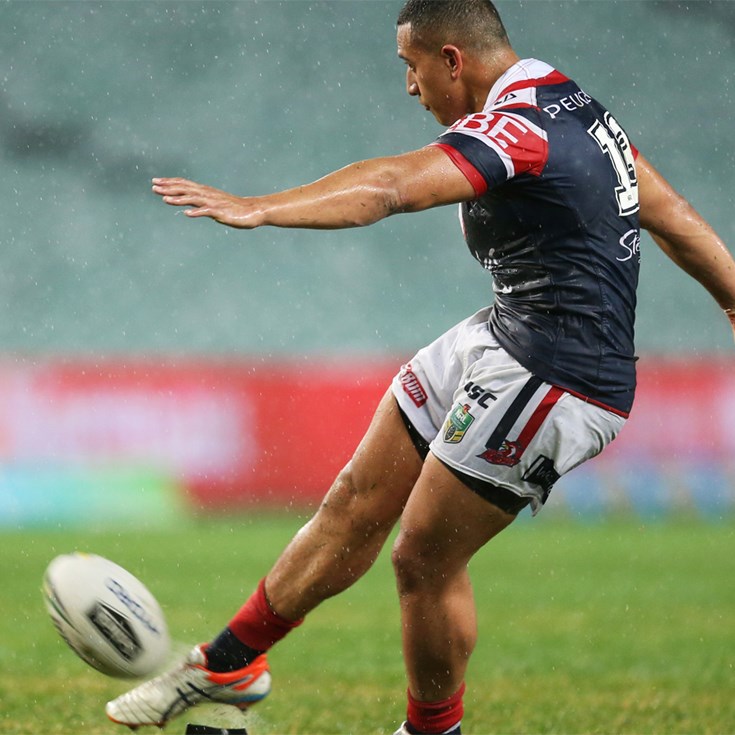