A double to rookie sensation Bevan French and a spectacular late try to Semi Radradra guided the Parramatta Eels to their third straight win with a 30-12 victory over the South Sydney Rabbitohs at ANZ Stadium on Friday night.

Eels coach Brad Arthur spoke highly of 20-year-old French on Thursday and the speedster proved him right with a fine display on the wing to take his tally to four tries from three NRL appearances.

Touted as a future star at fullback, French showed he is more than capable of playing on the flanks with two classy finishes either side of half-time to help his team avenge their heartbreaking loss to South Sydney back in Round 10.

French wasn't the only shining light with fellow winger Radradra putting forward his entry for try of the year with an absurd length-of-the-field effort in the dying stages to get his name on the scoreboard.

With time ticking down, the electric Eel intercepted a long pass from the Rabbitohs near his own line. Instead of taking the tackle, Radradra put on the afterburners, evading the first wave of defence, then the second and then the third before breaking into open pastures and crossing for a stunning solo effort.

Meanwhile Cody Walker showed no rust in his first game in the halves since Round 6 for the Bunnies while Alex Johnston relished a rare opportunity to play in his preferred position at fullback with a try and an assist.

John Sutton was a late inclusion for the Rabbitohs in his first game since suffering a pec injury in Round 1 but even his presence wasn't enough to get his side home on the night.

Draw Widget - Round 15 - Rabbitohs vs Eels

It didn't take long for the makeshift South Sydney spine to click into gear with Johnston sprinting onto a perfectly-timed pass from Walker to punish a Radradra error inside 10 minutes.

It was a lead that barely lasted five minutes as the Eels took advantage of back-to-back penalties to level things up courtesy of a Corey Norman chip kick and a Clint Gutherson put down.

The six-point deficit then became a two-point lead as Michael Gordon slotted a long-range penalty goal from the next set before the blue and golds stepped it up a notch to take control of the game.

Following a poor fifth-tackle option from the Bunnies, the Eels' attacking game clicked into gear with unheralded five-eighth Kenny Edwards and Tepai Moeroa combining to release Gordon with a gorgeous inside ball before the fullback offloaded to a flying French for his first of the night.

It looked at that stage as if the Eels would go on with it and possibly add to their lead before the break, but instead it would be the Bunnies who struck next through an unlikely source.

After a couple of controversial tackles in recent weeks, Rabbitohs enforcer Nathan Brown let his footy do the talking, backing up a break by Johnston to narrow the margin three minutes before half-time with his first try in the NRL.

The Eels dominated both possession and territory in the second half but it was the Rabbitohs who went closest to scoring with Dane Nielsen putting a foot into touch in the process of touching down before Sam Burgess had his effort pulled back for obstruction.

Those missed opportunities would prove the difference in the end as French punished a simple error from the base of the scrum to stroll over for his second of the night; Gordon's sideline conversion making it an eight-point game.

Another two points via the reliable boot of 'Flash' extended the lead with 10 minutes to play before the composed custodian slotted another penalty to seal the deal before Radradra rounded off the comfortable win with his freakish solo effort. 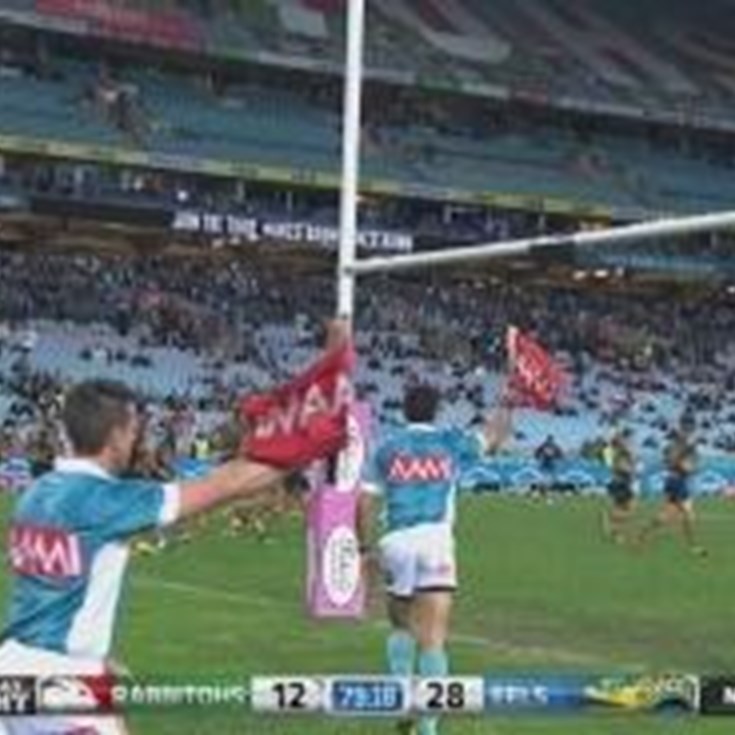