The St George Illawarra Dragons have recorded a 20-10 win over a makeshift Melbourne Storm side at WIN Stadium on Saturday night.

The Dragons' three tries to two effort temporarily sees them return to the NRL Telstra Premiership top eight thanks to late four-pointers from Mitch Rein and Kurt Mann.

It will also mean the Storm will drop from the top of the ladder when the Sharks are given two points from their bye to be outright leaders.

While the Dragons were missing Tyson Frizell to New South Wales Origin duty, the Storm were without crucial duo Cameron Smith and Cooper Cronk as well as three late withdrawals in Cameron Munster, Blake Green and Tim Glasby.

Unknown 18-year-old playmaker Brodie Croft made his NRL debut and hooker Slade Griffin played his first NRL game in over 1,000 days after consecutive knee constructions ruined his past two seasons.

The Storm secured an early 2-0 lead thanks to a Tohu Harris penalty goal, though it would be their only points in an otherwise ordinary first half.

It was Dragons skipper Gareth Widdop's half for the taking after he scored the game's first try after chipping the ball into Kevin Proctor before regathering in the 20th minute to score under the uprights.

Despite having seven consecutive penalties the Dragons failed to score another four-pointer in the first 40 minutes.

Widdop's penalty goal seven minutes from half-time saw the Dragons post an 8-2 lead in a relatively disappointing initial showing from the Red V.

Euan Aitken dropping his bundle over the try-line saw proceedings get off to a whimper in the second half but yet another Widdop penalty goal put the Dragons further ahead in the 46th minute.

There were millimetres in it but the Storm were denied a try of their own in the 55th minute, Dale Finucane falling just short of the white stripe.

It didn't take the Storm long to bounce back however when young Croft kicked out to the wing of Suliasi Vunivalu three minutes later for the Fijian flyer to touch down for his 12th try in eight NRL games.

Storm's hopes of winning were killed off with 13 minutes remaining when Mann crossed in the corner. Rein followed that up in the 71st minute when he dived over from dummy-half to help seal the win.

Vunivalu's second try 30 seconds from full-time continued the winger's remarkable run of scoring multiple tries in games when he secured his fifth double of his young career, taking his season tally to 13 tries from just eight games.

But it was too little too late. 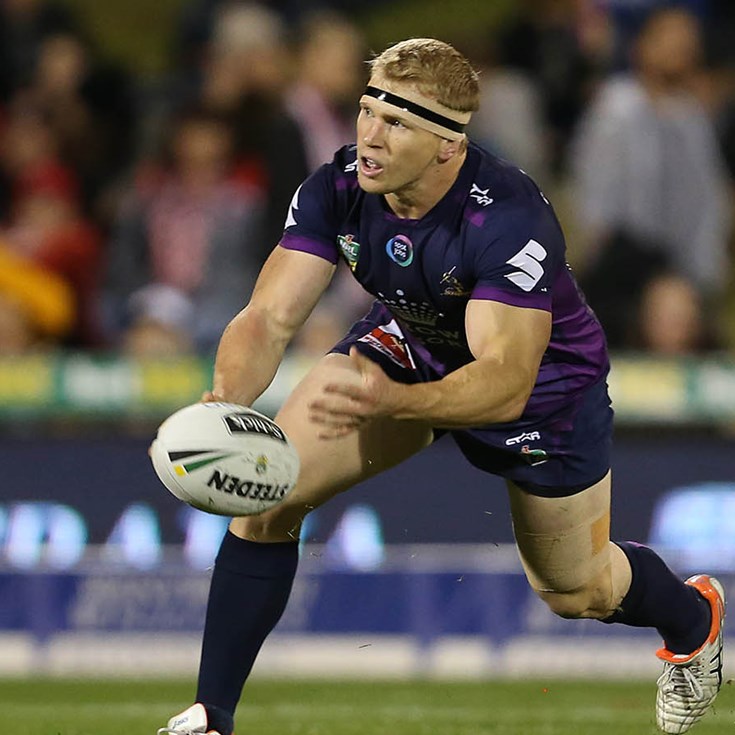