The Titans have played their way into the Telstra Premiership top eight with a 30-10 win over Manly on Monday night but they are yet to prove they are genuine finals contenders.

Taking on a Manly team devoid of Daly Cherry-Evans, Dylan Walker, Nate Myles and late withdrawal Jamie Lyon the Titans exploded in an eight-minute period midway through the first half but took until eight minutes from full-time before finally putting the Sea Eagles away.

A 16-0 lead after 19 minutes was reduced to 18-6 by half-time and despite scoring in the second set of the second half Gold Coast almost let the Sea Eagles get back within eight points 10 minutes from full-time when Jake Trbojevic fumbled the ball on the try-line.

Completing at 75 per cent belied the fact that Manly had little experience in the halves to adequately finish attacking sets, Lewis Brown and Martin Taupau both successfully putting in kicks into the Titans' in-goal in the first half to earn repeat sets.

The Sea Eagles committed almost every rugby league sin available to them and were barely able to defend their line for more than one set at a time but they were allowed to hang in to a contest for far longer than they should have.

Gold Coast's credentials will receive a more stringent test when they host the Raiders at home on Sunday but for now a team that was written off as wooden spoon certainties back in February are showing just enough to indicate they could make a return to September football for the first time since 2010.

The Sea Eagles were dealt a pre-game blow with the withdrawal of captain Jamie Lyon with his ongoing hamstring concerns but If anything they had the brighter start of the two teams and showed plenty of energy early.

The first Sea Eagles kick from Apisai Koroisau found open space in the Titans' 20-metre zone to put a flutter through the hearts of Titans players, and subsequent kicks from Martin Taupau and Lewis Brown both earned their team repeat sets early in the contest.

But having absorbed that early pressure from the Sea Eagles the Titans struck first through the middle with a well-worked play involving Nathan Peats and Ryan James creating a hole for Luke Douglas to score his first try since Round 13, 2014 in the 11th minute.

An error on halfway and Jorge Taufua being bundled into touch on tackle one put the Sea Eagles under more goal-line pressure, and the Titans executed well enough to create numbers on the right for Anthony Don to score his sixth try of the season after 16 minutes.

When the subsequent kick-off from Tom Trbojevic sailed a metre over the dead-ball line the Titans again exposed Manly's thin edge defence, a sweeping play to the left putting William Zillman into space who delivered a left-hand flick pass for Josh Hoffman to cross untouched.

With the scoreboard mounting against them the Sea Eagles finally tasted success on their left edge when a Tom Trbojevic juggling act finished with a one-handed flick pass to Taufua to plant the ball inside the left-hand corner.

Any hopes of a Sea Eagles second half resurgence lasted little more than the first two sets after resumption when a Matt Parcell error late in the first set gifted the Titans possession on the 40-metre line and four tackles later Ryan James strolled through left of the posts to extend the lead to 18 points.

A superb cut-out pass from Pita Godinet put Brayden Wiliame over in the right-hand corner 15 minutes into the second half but a chance to further bridge the gap slipped through the skipper's fingers when Jake Trbojevic lost control following a kick deflection in front of the posts.

The Titans were finally able to put the ink on their seventh win of the season when Nene Macdonald grounded an Ash Taylor grubber kick in the on-goal while for Manly it sealed their sixth loss on the trot and 14th spot on the ladder. 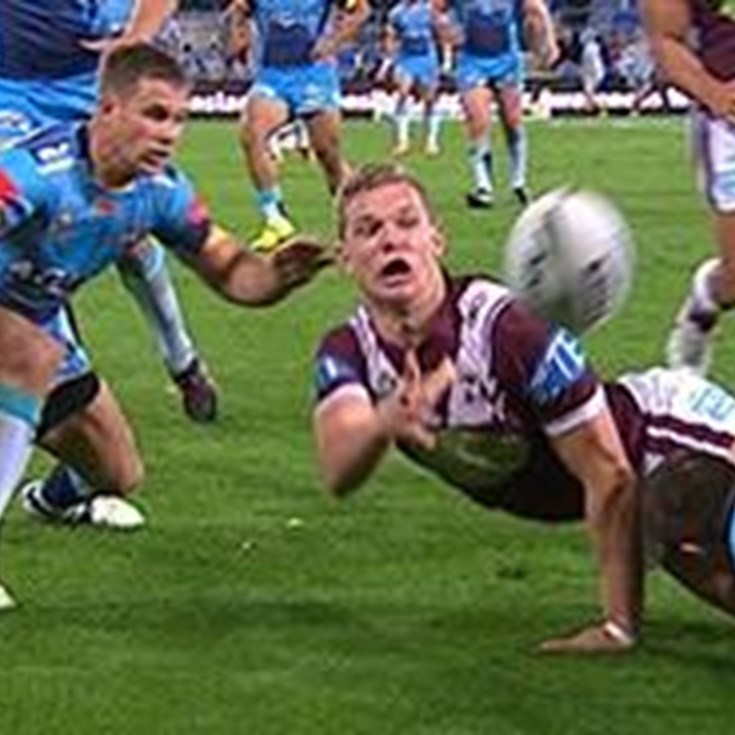