A Bryce Cartwright masterclass sparked the Panthers to a 28-26 win over the Rabbitohs in near-freezing conditions in Round 16 of the NRL Telstra Premiership. South Sydney stormed home with two late tries but it wasn't enough to end their three-week stretch without a win.

Bryce Cartwright a Blue in waiting

New South Wales Blues aspirant Bryce Cartwright has done his State of Origin hopes no harm after putting in another masterful performance against the Rabbitohs on Friday night.

Cartwright set up three tries, ran for 121 metres and produced six offloads in a performance that must make Blues coach Laurie Daley tempted to hand him a debut for Game Three.

"I think he deserves a shot," Mansour said after the game.

"He's been enormous for us at club level.

"He's just got that style of play that puts the opposition off. He's got everything in the kit; he's got a good offload, he's a hard runner of the ball and can play in the halves as well which is a huge bonus.

"He'll get so much confidence out of being the 18th man. If he keeps going the way he's going then he's definitely going to get an opportunity.

"I think his time will come soon. When that will happen, I don't know."

It's not all doom and gloom for the Bunnies with coach Michael Maguire telling Channel Nine before Friday night's game that halfback Adam Reynolds was in line to return as early as next week.

The Rabbitohs No.7 was expected to miss at least three weeks after injuring his shoulder playing for the NSW Blues on Wednesday night, but his coach is confident that he will return ahead of schedule.

While Reynolds missed the game against the Panthers, Maguire was proud of the effort put forward by Luke Keary and Cody Walker in the halves.

"Adam brings a different facet to the game, and obviously when you've got him, it's a great thing for us," he said.

"The people that I put in there were definitely capable of doing it. I actually think they showed some pretty good play."

Draw Widget - Round 16 - Panthers vs Rabbitohs

Merrin lets his footy do the talking

While most of the State of Origin talk has centred on teammate Bryce Cartwright, fellow Panther Trent Merrin has been quietly mounting a case for a recall to the Blues squad for Game Three.

Merrin had his best game for the Panthers on Friday night, running for a season-high 223 metres and making 45 tackles in a sterling 80-minute effort.

It caps off an impressive month of footy that hasn't gone unnoticed by Panthers coach Anthony Griffin.

"He plays long minutes, he gets a lot of metres for us, he's selfless with his defensive attitude and I'm glad he's playing for Penrith."

Maguire hasn't given up on the finals

His side might be languishing in the bottom four after 16 rounds, but South Sydney Rabbitohs coach Michael Maguire still believes his team can play finals football in 2016.

While he said that the club was "still alive in this competition" Maguire refused to look any further than next week's tough assignment against the Cowboys.

"I only think about next week. What happens in the future, I can't control that. What we can control is what we do this week," he said.

"The players are putting a lot of work in but we're not getting the rewards that all we want.

"There's a big expectation at our team on how we play. We have got a very strong culture in the club about performing and winning games of football and that's what we've got to keep striving for. This week's going to be no different."

"We just need to address this match and move on to the Cowboys," Inglis said.

"We know going up to Cairns is going to be a challenge for us, but it's a challenge we're looking forward to."

Hats off to the fans at Pepper Stadium

It wasn't the monsoonal conditions that wreaked havoc across Australia's east coast a few weeks ago, but the weather in Penrith on Friday night was still tough for spectators.

The mercury dipped to five degrees during the Holden Cup clash, and while it rose to a 'stifling' eight degrees, the wind chill factor made it feel a lot worse than that.

To their credit, 13,080 hearty souls braved the cold to cheer on their team, and the home side's support was rewarded with a crucial win that momentarily moves them back inside the top eight.

Panthers fans received some more good news after the game with Anthony Griffin hinting at an earlier than expected return for Te Maire Martin from a shoulder injury.

"He's back nearly in full training now. It's great to see him around the place again and training." 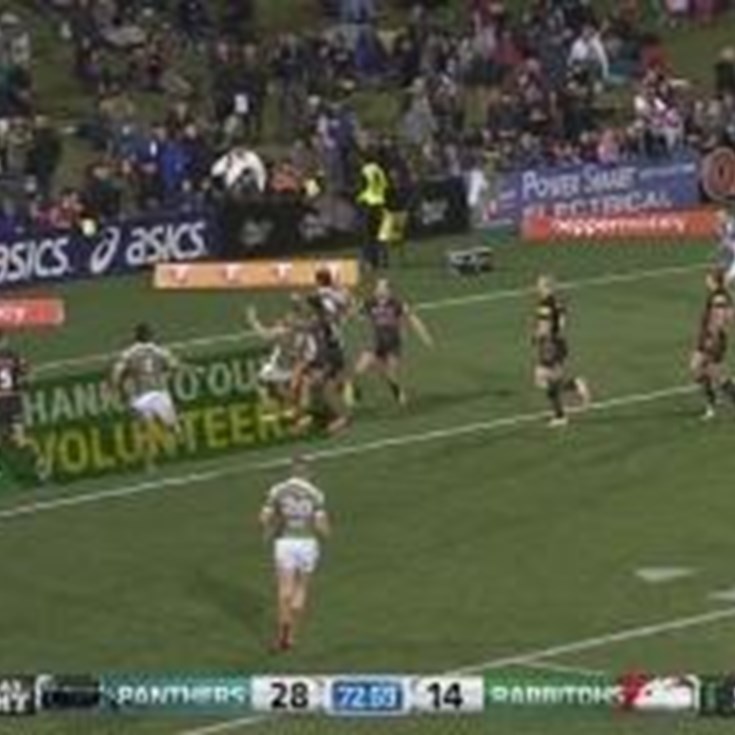 Short way to the top for Cleary