They might have started the season under the radar, but the Bulldogs are now well and truly in the crosshairs of the 15 other teams in the NRL Telstra Premiership.

On the back of three straight wins, the blue and whites have snuck into fourth on the ladder and could move into equal third should results go their way this weekend.

Their last-start win over the Roosters encapsulates how far they've come, with the Bulldogs overturning an early 12-point deficit – just like this weekend's opponents – to get the win; something they wouldn't have done in the earlier rounds.

The threat of State of Origin has been kind to them this week with Josh Jackson and David Klemmer the only players set to miss, while the Tigers will be without three key weapons in James Tedesco, Aaron Woods and Robbie Farah.

The star trio will be sorely missed by a Tigers team looking to back up their impressive 34-26 win over the Panthers last week.

It mightn't look it, but it was their defence that got them home against Penrith, and their work without the ball will have to be even better if they want to tame the red-hot Bulldogs.

The loss of Jackson and Klemmer has been slightly tempered by the return of Greg Eastwood from injury. Danny Fualalo will start at lock while Tim Browne comes back into the side via the interchange bench.

Jordan Rankin shifts to fullback to replace Tedesco with Josh Addo-Carr taking his spot on the wing. JJ Felise, Joel Edwards and Michael Chee-Kam have been added to the bench to replace Farah and Woods.

Watch out Bulldogs: Having recently extended his contract at the Tigers, five-eighth Mitch Moses has started to play the most consistent footy of his career as he prepares for what will be his his 50th game in the NRL. Moses scored the last time these sides met but the 21-year-old will need to lift in his milestone match with James Tedesco missing on Origin duty.

Watch out Tigers: While the Bulldogs have been slightly weakened by Origin, they still have the luxury of naming the strongest side on paper out of all eight clubs playing this weekend. Their spine has been unaffected by the interstate spectacle, while they will boast five players with Origin experience and plenty more who have featured on the international stage.

Key match-up: Josh Morris v Kevin Naiqama. They don't get the credit they deserve, but these two centres are integral members of their respective attacking structures. Morris is widely regarded as the best defensive centre in the competition, but that doesn't mean he isn't threatening with ball in hand. The Bulldogs veteran has scored five tries in 2016 and has linked well with Curtis Rona – and more recently – his twin Brett on the wing. What Naiqama lacks in height, he more than makes up for in skill. His speed and attacking nous have been on show countless times for the Tigers, with the high-haired centre crossing for seven tries and producing five assists as well.

The history: Played 27; Bulldogs 19, Wests Tigers 11. The Bulldogs have enjoyed plenty of success over the black and golds in recent times, winning eight of the past meetings since 2011. Canterbury had it all their own way when the sides met back in Round 10 with a comfortable 36-4 victory at ANZ Stadium.

What are the odds: It’s one-way traffic for the Bulldogs as far as the betting is concerned. According to Sportsbet, three times as much has been bet on Canterbury in the head to head market while Bulldogs 13-plus is almost as popular as the Doggies in handicap betting, where they’re conceding a big start. Latest odds at Sportsbet.com.au.

The way we see it: The Bulldogs have been one of the form teams over the past month, and that should continue against a Tigers team missing key personnel. The Tigers will be brave, but will struggle to compete without the attacking prowess of Tedesco, the size of Woods and the direction provided by Farah. Bulldogs by 18. 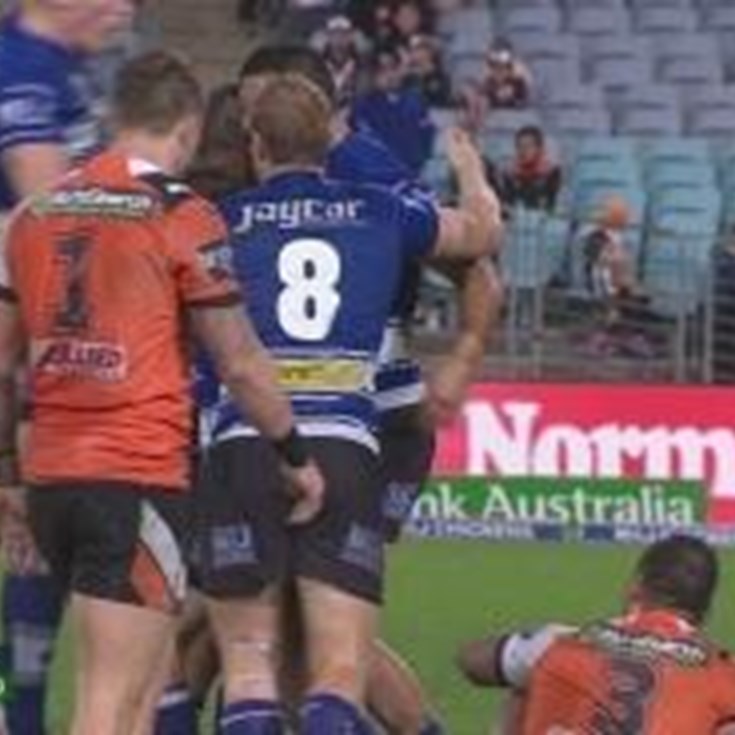 Tigers realising what we can do: Moses