After enduring a torrid 80 minutes where the Warriors finished the better side, the Sea Eagles came up with the clutch plays when they mattered to pick up their fifth win of 2016.

A heads-up decision from Jake Trbojevic saw him charge down and re-gather an attempted field goal from Shaun Johnson in added time, and set his side up with the set which saw them deliver the killer blow in Perth.

Played through torrential rain, there were only two points scored through the second 40 minutes in a match which Manly led 14-12 at the break.

The Sea Eagles made a flying start, scoring twice inside the first 15 minutes, with errors from the Warriors presenting them with both scoring opportunities.

Following a ruck infringement from Charlie Gubb, Tom Trbojevic got his hands on the ball in a left-side shift and broke would-be tackles from both Blake Ayshford and David Fusitu'a to score.

He then turned provider with some quick hands which found Matthew Wright and eventually Jorge Taufua for Manly's second. Jamie Lyon converted both for a 12-0 lead.

But two pieces of brilliance six minutes apart from Johnson and rookie Bunty Afoa saw the Warriors draw even on the half hour.

Playing just his second NRL game Afoa pierced through from 12 metres for his first try on 23 minutes, before crossing via a near identical effort off a no-look pass from Johnson.

Both conversions from Issac Luke raised the flags.

A leg pull from Solomone Kata in the dying seconds of the half gave Lyon an easy two, and sent Manly into the sheds 14-12 up.

The Warriors had several opportunities to add to their 12 points inside the final 20 minutes.

Luke pushed a penalty attempt wide, Kata dropped the ball over the line and veteran Manu Vatuvei was bundled into touch with only one defender to beat.

Eventually Manly were split open by Thomas Leuluai, having to give up a penalty in front of the sticks rather than conceding a quick play the ball with a broken defensive line, with Luke converting the chance to make it 14-all with five to go.

A knock-on from Jazz Tevaga in the final minute gifted the Sea Eagles with ideal field goal positioning, but Cherry-Evans' scrappy effort was well wide.

A Sea Eagles' error in golden point allowed the Warriors to march down field, where Johnson set for the one-pointer only to be blocked by a flying Jake Trbojevic, who had the presence of mind to re-gather the ball.

From there Manly were clinical, getting into position where Cherry-Evans calmly slotted to seal the victory for his struggling side. 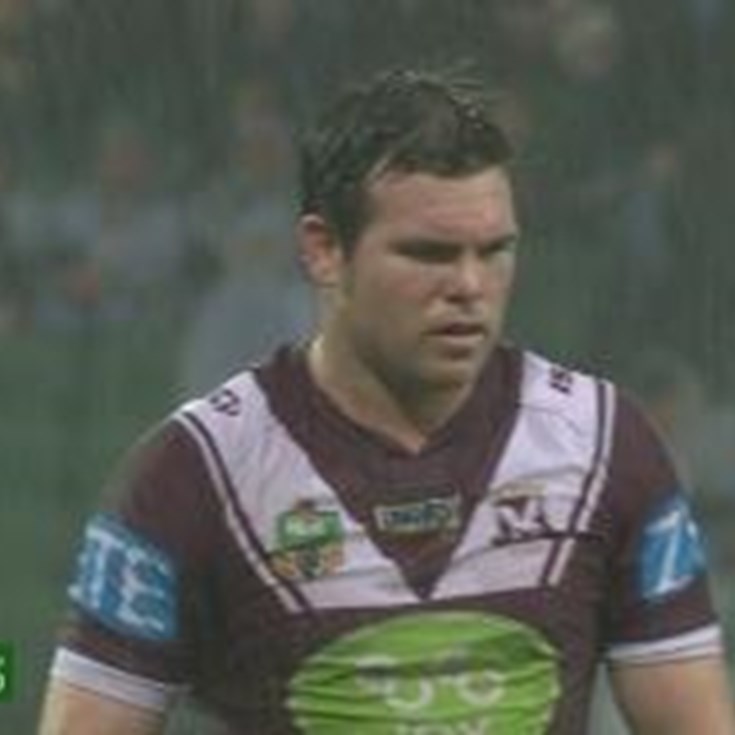