Newcastle Knights mid-season recruit Mitchell Barnett has declared he's found a home in the Hunter and won't be throwing it away any time soon.

Barnett joined the club in early-June from the Canberra Raiders and has played every NRL game for the Knights since his arrival.

The 22-year-old was one of the Knights' best in their narrow 20-16 loss to the Melbourne Storm on Sunday, and for the third-straight game made over 140 metres.

The Wingham Tigers junior's shift back to Newcastle – he featured for the Knights' lower grades several years back – has him just two hours south from his family.

As Barnett himself puts it, he has no excuses not to be successful.

"I have nothing but raps on the place and it just feels like home. It's good to have all my family and friends nice and close now. They're the ones who matter the most at the end of the day," Barnett told NRL.com.

"The results on the field are starting to show how we're all coming together. All the boys have made me feel at home.

"If I'm lucky enough I'd like to stay here for as long as I can, I really want to prove myself to the club and that starts by finishing the year off strong."

Barnett offered Knights coach Nathan Brown the ultimate praise for his "phenomenal" treatment since he arrived.

Tariq Sims's departure to the Dragons a month ago opened the door up for Barnett to add to his two NRL games, and it's a position he isn't taking lightly.

"I can't get complacent at all," he said.

"Same goes for everyone else but if we can keep these boys together for a long period of time, you'll see us at the top of the table in due time with these other big teams."

Brown – while disappointed in the Knights' 11th straight loss on Sunday afternoon – declared nobody could argue that his side has improved.

The first year Knights coach made a point that the Storm in recent weeks have beaten Brisbane and the Roosters by 40 points and that was without Will Chambers and Cameron Munster, who returned against Newcastle.

"Everybody would agree we're a far better team than what we were 10 weeks ago. It's there to see that everybody we have brought in over the year is helping us move forward," Brown said.

"The development the younger kids are getting through all the games is a big part in that. It's a good indication that while we didn't win, and we're disappointed not to win, there's been some significant improvement these past two weeks. 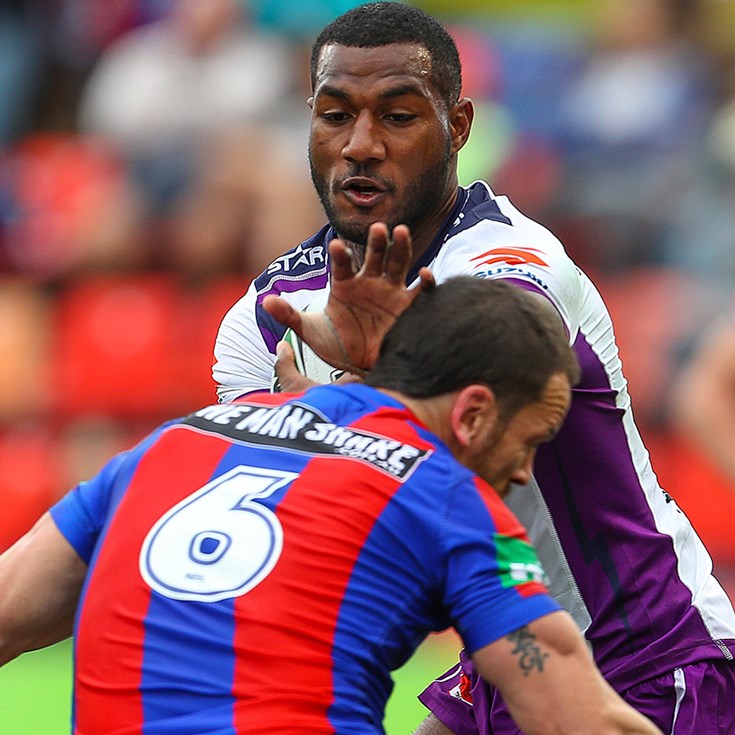