The Sharks have reclaimed their outright lead at the top of the Telstra Premiership ladder with a 32-20 victory over the Roosters to make it 14-straight wins in 2016. They weren't at their best, but the Sharks did enough to hold off a Roosters side that looked like the attacking juggernaut of years gone by.

Draw Widget - Round 19 - Roosters vs Sharks

Sharks far from their best, but did enough to get the win

Sharks coach Shane Flanagan says his side were off their game on Monday night, but was happy to leave Allianz Stadium with the two competition points.

The ladder-leaders completed just 69 per cent of their sets and conceded nine penalties but did enough to stretch their unbeaten run to 14 matches.

"It wasn't us, but the true grit and the ability to just hang in there got us the two points.

"Winning creates that culture and attitude. They believe in each other.

"I wasn't happy with the way we defended. Offensively we were pretty good – we turned over the ball in the second half five times which is not us – but you're going to have those days.

"To still be able to win when you have those days is a credit to the players."

Flanagan paid the Roosters the ultimate compliment after the game, suggesting they would have had a much different season had they not been ravaged by injuries and suspensions.

"The Roosters are a good footy side and they played really well tonight," he said.

Roosters can be nuisance value

They remain the slimmest of mathematical chances to play finals football this season, but the Roosters can still be of one the most dangerous teams in the NRL.

The Tricolours finish the season with matches against teams competing for the minor premiership, a second-chance in the finals, or a spot in the top eight.

With seemingly nothing to play for – and a full squad to choose from – they could still play a telling role in the final seven rounds.

"If we can be competitive and try to knock a few of them off in the back end of the season then it'd be good for us leading into next year," Roosters captain Jake Friend said.

"It'd be great for our confidence and for some of the younger guys to be in the big games like that."

With youngsters such as Connor Watson and Latrell Mitchell continuing to develop, Roosters coach Trent Robinson believes the results will turn around soon.

"We really enjoy training and playing and we enjoy each other's company, and we're doing some good work, but it's not paying off at the moment," he said. "If we keep going, it will."

Players unfazed by the streak

Sharks skipper Paul Gallen says the players aren't thinking about any records after his side notched a 14th-straight win to jump back to the top of the table.

The Sharks are unbeaten since a 22-12 loss to the Sea Eagles in Round 3, and are on track to surpass Easts' 1975 record of 19 straight wins in a season.

Despite the 12-point win over the Roosters, Gallen said he was bracing for a backlash from coach Shane Flanagan for a performance that he knows was below par.

"We don't think like that as a playing group," he said when asked about the streak.

"I know it's a cliché, but we're playing week-to-week, and with someone who gets a bit cranky here (Flanagan) it doesn't feel like 14 in a row, and I guarantee this week won't feel like it either."

Attack coming together, but errors still an issue

Trent Robinson might have left Allianz Stadium disappointed with some of his side's defensive options, but he couldn't fault what they delivered in attack against one of the competition's premier defensive units.

"I thought there was some great attack there," Robinson said.

"Right from the backfield, all the way down to the try line, I thought right across the field we had lots of options, lots of play and ad lib footy.

"We've been working on quite a bit of stuff and I think we saw some of it [tonight]. We saw some clunky bits where you could see what might have happened if we got it together, and you saw some bits that came off that were hard to defend.

"They're one of the best defensive teams in the comp and we ended up with 20 points in the end and it could have been more."

As good as they were with the ball, Robinson knows his side will continue to struggle unless they address their errors and defensive missteps.

"We can't continue to give up some of the tries that we're giving up," he said.

"We keep playing hard, but we're just not stopping them. It's not one individual, it jumps. Someone is having a really good game and then they have a big error and it costs them a try, and that's why we are where we are."

Sharks won't be resting anyone

His side might be sitting pretty atop the Telstra Premiership ladder after 19 rounds, but Sharks coach Shane Flanagan isn't about to start resting his star players.

Flanagan confirmed after the game that his State of Origin quintet, as well as some of the more senior players, would likely be given lighter loads at training to help them freshen up, but said they wouldn't miss any games.

"We won't rest people for games because nothing is guaranteed for us," he said.

"We need to keep winning football games and that's our intention to win every game we play in."

That starts on Sunday afternoon when they host the Newcastle Knights, the side they beat 62-0 earlier in the year.

Flanagan is hoping to have NSW Blues halfback James Maloney available for the clash after he succumbed to an injury after 65 minutes on Monday night.

"He's got a bit of groin strain," Flanagan said.

"He didn't kick a goal while he was still on.

"He's had a big Origin campaign – he played the three games and did a lot of work – so I need him at the end of the season." 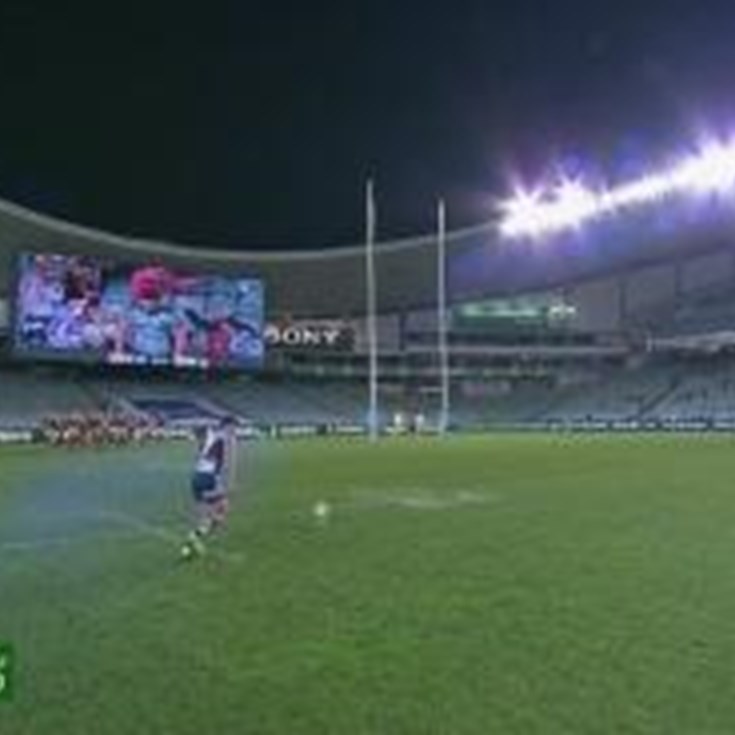