She is one of the toughest rugby league players on the planet and had circumstances been different Kezie Apps would be one of the highest earning stars in the game, according to NSW Women's coach Ben Cross.

Apps and the NSW team came into camp on Wednesday and will be attempting to end Queensland's 17-year undefeated reign in the Interstate Challenge when the women's state sides clash at Cbus Super Stadium on Saturday afternoon.

There is no question Apps will be in the thick of the action if NSW are to record a historic maiden victory.

"That's the type of athlete she is, and the kind of rugby league player she is.

"In last year's game she had a massive hematoma on her shin and she got stretchered off and with about 15 minutes left to go in the game she is back on the field running terrific lines and making cracking tackles in defence.

"She is not a girl playing rugby league, she is a rugby league player in every essence of the word."

Her fondness for running a tough outside-in line was forged playing league tag, but has been much more successful now that defenders actually have to try to physically stop her.

"I used to play league tag and you think you are through a hole and then someone rips your little tag off and I used to get really annoyed," Apps told NRL.com.

"I thought if this was tackle, someone would have to try and stop me."

It's something that defenders have struggled with ever since she made the jump to the code and it could be crucial in Saturday's contest against a Queensland team full of Jillaroos.

Cross, a grand final winner with the Melbourne Storm, paid Apps the ultimate compliment comparing her to his former teammate Ryan Hoffman.

"She is a threat with or without the ball. I've seen Ryan Hoffman do it his whole career, he'll keep getting smashed and keep getting up and running the same tough lines and Kezie is no different," Cross said.

"The one time the defender doesn't put their body on the line they will go straight through and I've seen plenty of footage of her doing that. It reminds me a lot of Hoffman. I've talked to Cooper Cronk about her.

"It is a tough line and she takes a fair few hits because of it, but by doing it she also opens up a lot of opportunities for the fullback or outside backs." 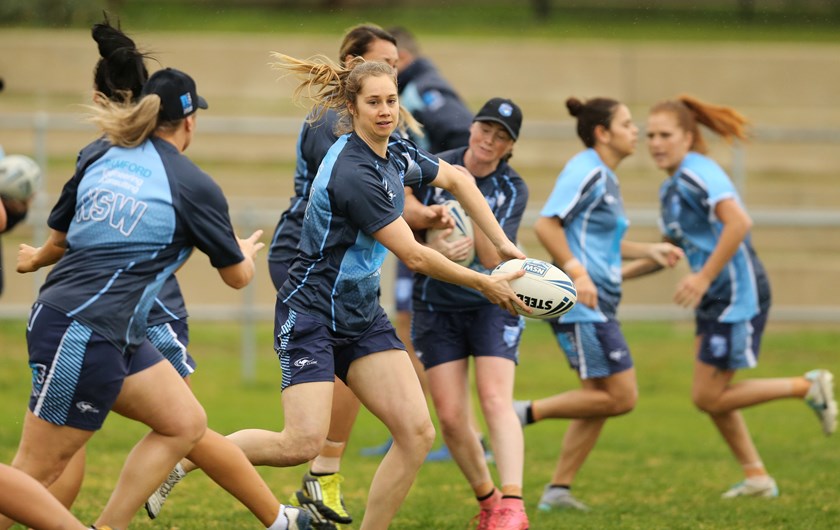 Hoffman has been doing it for his whole 274-game NRL career and there is no doubt Apps will be looking to put her body on the line in both attack and defence for the cherished Blues jersey.

The NSW team led by Ruan Sims will feed off the history of the women's interstate challenge – knowing they have an opportunity to create history by becoming the first team to beat Queensland.

It's something they don't take lightly.

"It means a lot to all of us, but those girls have certainly been through a lot and to hear from the senior girls the history behind the jersey and what they have gone through it really enlightens the new players coming in and it brings a lot of pride to the jersey.

"We aren't just playing for friends, family and the state, we are playing for the girls who have played previously and we are trying to get the win for everyone who has been involved.

"We've only got this one opportunity, hopefully everything comes together and we can execute it on the day."

A win would be just reward for a player who regularly travels five hours every Saturday just to play the game she loves. One way.

It this selfless, no-nonsense approach to football that has earnt Apps so many admirers and why the chance to play in the interstate challenge to finally end Queensland's dominance means so much.

"We play because we love it, a lot of the girls have to make sacrifices, we take time off work and some have to juggle their kids as well, so I think when we come into camp it makes it more special," Apps said.

"I'm used to doing the five-hour drive now, I work Monday to Friday, jump in the car Saturday morning and travel up the coast to play footy, it's just my routine now. It feels normal to me now but I wouldn't have been able to do it without my parents."

The Women's Interstate Challenge will be played on Saturday at 3.10pm at Cbus Super Stadium and will be streamed live on NRL.com.