The New South Wales Women's team have never had a better chance to end Queensland's 17 year dominance of the Interstate Challenge and they don't want to let the opportunity slip by.

The establishment of a new structured rugby league competition for girls in Sydney earlier this year was a watershed moment for the women's game and the momentum is building ahead of Saturday's clash at Cbus Super Stadium.

The Blues have been training together in an extended squad for months in preparation for the challenge ahead and there is a lot of belief that they can finally put an end to Queensland's undefeated streak after managing an historic 4-all draw in last year's clash.

Five-eighth Allana Ferguson made her debut for the Blues last year after turning her back on the chance to represent Australia at the Olympics in rugby sevens and she's already noticed a massive change in women's rugby league in NSW.

"For quite a long time Queensland were more developed within the game of rugby league and that was reflected in Jillaroos selections and obviously they've been pretty dominant in the Interstate matches," Ferguson told NRL.com.

"But because NSW rugby league has created this pathway and we've been able to train on Sundays, we've had an extended squad for quite a while and where we are now is a reflection of the professionalism that we have and we are confident we can get the result on Saturday.

"It's been awesome, it's a preparation we've never had, we've been able to build really well and focus on the basics which means when we came into camp we are ready to go and we don't waste any time.

"We are confident in ourselves and each other and a lot of that is the opportunity NSW rugby league has given us."

A key to the Blues' chances will be a core group of players who have been playing together for a long time at both club side Cronulla-Caringbah and the national team.

Seven members of Cronulla-Caringbah will play for NSW against Queensland

Ferguson partners Jillaroo halfback Maddie Studdon in the halves, with superstar fullback Samantha Bremner also a key figure for both club and country.

Add captain Ruan Sims and an all Jillaroo backrow of Kezie Apps, Vanessa Foliaki and Simaima Taufa and NSW know they have a quality football team capable of beating Queensland.

"Last year's Origin was a huge eye-opener for me the standard of football was so high," Ferguson said.

"My role in the halves, I've got a lot of organising and I need to know the best option to take and need to keep my eyes up.

"We'll have very similar structure that we like to play, the combination with Maddie is going well and we've had a chance to play a fair bit of footy with each other now.

"We have a lot of trust in each other and that is really important."

The growth of the women's game has had an immediate impact on Ferguson who has learned some valuable lessons by playing more matches against stronger opposition.

She hopes those lessons - especially the ones she learned by taking on New Zealand - will help her guide NSW to a ground-breaking victory on Saturday.

"When we took on the Kiwis I noticed they play very differently to us, they are always looking to spread the ball and if they see an opportunity, they don't wait, they just go for it," she said.

"It really taught me the importance of having options, don't just plan a hit-up or to get to a certain spot on the field, because the defence can cover that easily, by organising a little more and having more players available, it means you can be more productive in attack and create more opportunities.

"The key is for me to talk a lot, and get our structures in play.

"That's where the professionalism has been really good, we have a strong group of girls who all really trust each other, and because we've been together training so much, it should give us a good chance.

"There's not going to be much in the game, whoever makes the key plays at the right time and runs that little harder will win."

The Women's Interstate Challenge will be played on Saturday at 3.10pm at Cbus Super Stadium and will be streamed live on NRL.com. 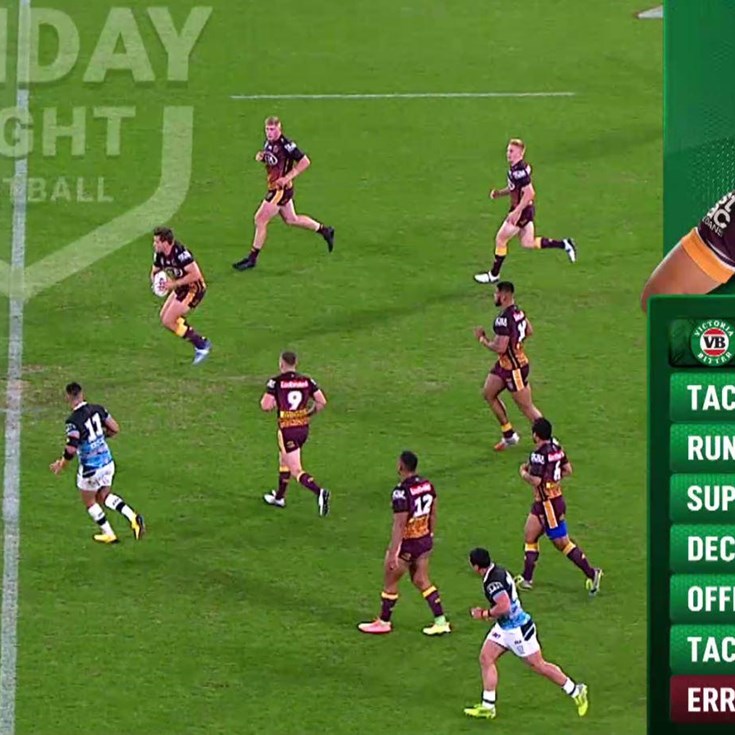 For and Against: Should the Bunker rule on forward passes?

Team of the Week: Round 12 - Panthers prowl, Rabbits rev up