A golden try from Jarrod Croker saw the Raiders pick up their fourth straight win on Saturday afternoon, beating the Warriors 26-22 in a result which lifts them into the NRL Telstra Premiership top four. Here are five key points from the Men of League Round clash at GIO Stadium.

The killer blow may have been delivered after regulation time, but the Raiders won the match in the opening 40 minutes with their defence.

Canberra copped a hammering through the first half as the Warriors dominated possession and spent consecutive sets camped inside opposition territory.

But time and time again the Raiders sent them back without points, eventually getting a couple of chances of their own late in the half and taking a 12-4 lead into the sheds, which captain Jarrod Croker said was a welcome surprise.

"We probably would have been happy to go in at 4-0 [behind] at half-time, we did a lot of defence early and we scrambled really hard," Croker said.

"To go in with the lead we had a bit of confidence."

For the third time in their last four games the Warriors lost in golden point, suffering additional time heartbreak yet again.

Had they won all three of those games they would be comfortably inside the NRL Telstra Premiership top eight, but instead they will finish the weekend outside of the eight altogether.

Captain Ryan Hoffman said while the spirit they displayed was admirable, it was little consolation.

"There is a lot of effort there, we are competing until the 80-whatever-it-is minute, but we need to start finishing off those games," Hoffman said.

"We are putting in a lot of effort and we need to start seeing some results."

"We will be fine, they are working hard the group, it is a harsh lesson to learn but that is where we are as a group at the moment," McFadden said.

"Unfortunately the game comes down to small moments and the teams we have played against have just taken their chances."

The Warriors have now gone to golden point four times this season, winning one (beating the Roosters 32-28 in Round 5) and losing three.

Late collapse a worry for Stuart

Golden point should never have even been on the cards at GIO Stadium.

"That last part of the game is not us, we made some really, really cheap and poor decisions that cost us dearly in regards to some fatigue in defence and bad decisions," Raiders coach Ricky Stuart said.

"I thought we played extremely well for an hour of footy, but we have got to play for another 20.

"They scored three tries and got back into the game very quickly and it's not good enough."

In a game that went right down to the wire, captain Jarrod Croker was arguably Canberra's best on the field.

A hat-trick of tries – including the game-winning touchdown in golden point – and three conversions from four attempts made all the difference for the home side in the end.

Croker also made two line breaks, ran for 100 metres and made 17 tackles without a miss, prompting lavish praise from Stuart post-match.

"The consistency Jarrod has shown this year, the aggression he has got in defence... Jarrod's defence is so strong, has been strong all season," Stuart said.

"His consistency with every part of his game comes from the way he works off the field... I am really happy he is getting that mention and accolade, because he deserves it.

"He has got no greater support than myself."

After using Tuimoala Lolohea for only two minutes of last week's 15-14 golden point loss to Manly, McFadden was widely criticised in both New Zealand and Australia.

But in Canberra the decision to keep Lolohea on the pine to start the match seemed to pay off.

Starting fullback and wing trio David Fusitu'a, Ken Maumalo and Manu Vatuvei all had strong games, each running for over 100 metres, while Vatuvei and Fusitu'a both scored tries.

Lolohea also made a valuable impact against tired defenders when he came on, something he may not have been able to do had he been in the game from the start.

The 22-year-old utility made a line break and 59 metres off five carries, playing 33 minutes.

"That was always the plan [to give him more time] and we got that chance today, and I thought he did a really good job," McFadden said when asked about Lolohea.

"He is certainly pushing." 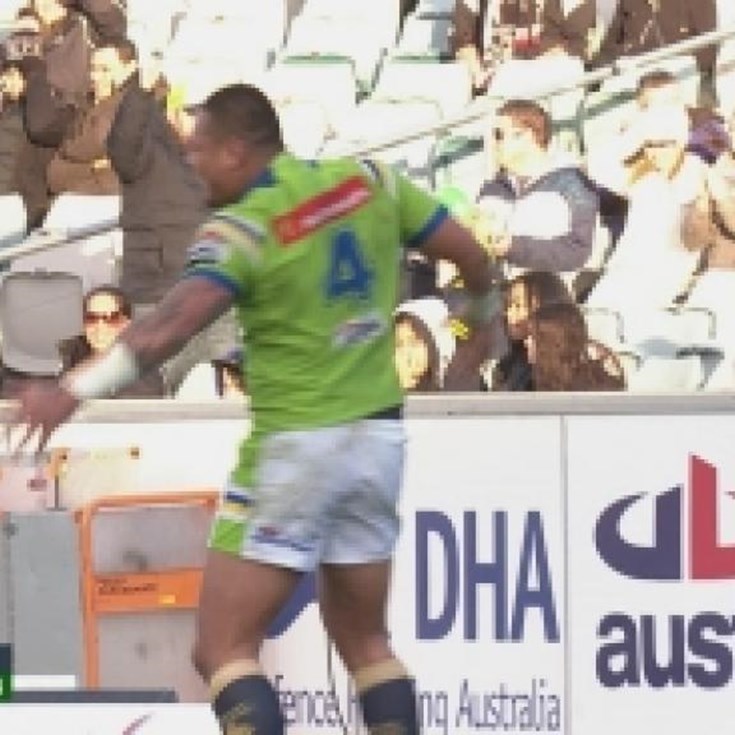 Warriors after payback in Canberra

McFadden: My faith in Lolohea is unchanged