The Sea Eagles have kept their slim finals hopes alive with a 20-12 win over the South Sydney Rabbitohs on Monday night to move within four points of the Telstra Premiership top eight.

The game looked over at half-time with Manly ahead 18-0 and seemingly in complete control, but a spirited second-half revival saw the Bunnies pull within six points with half an hour remaining.

That's as close as the Bunnies would get as they recorded their seventh straight loss to just about put their hopes of playing finals footy to bed.

Having lost seven in a row themselves not that long ago, Manly are now on a roll, and with games against the Knights and Eels to come in the next fortnight, will fancy their chances to apply more pressure to those teams in seventh and eighth.

The game couldn't have started any worse for South Sydney with winger Joe Burgess spilling the ball after two minutes.

From there, the Sea Eagles wisely turned down a gift two points – despite the trainer suggesting otherwise – and the decision proved to be a masterstroke as Api Koroisau and Daly Cherry-Evans combined to send Jamie Lyon over after a beautifully worked move through the middle of the ruck.

Back-to-back penalties provided the Rabbitohs with an opportunity to hit back immediately, but a textbook tackle from Jake Trbojevic on Thomas Burgess cut the big man in half and more importantly forced the ball loose.

Spurred on by his brother, Tom Trbojevic showed off his freakish ability with a trademark bust through the middle which was soon followed by a simple penalty goal to push the lead out to eight.

A six-again call and some quick hands down the left-hand side added to South Sydney's woes as Jorge Taufua crashed over to make it 12-0 after 25 minutes.

Things didn't get any better for the hosts as the class of Daly Cherry-Evans and the line-running of Jamie Buhrer combined to put Tom Trbojevic over for his seventh try of the season to send the travelling fans into raptures.

It might have come on the back of a bizarre passage of play, but the Rabbitohs managed to narrow the gap five minutes into the second stanza as returning NSW Blues halfback Adam Reynolds dummied close to the line to stroll over.

Michael Maguire's half-time speech must have been one of the greats as his troops continued to pile on the pressure after the break to cut the gap to six points as Reynolds set up Cody Walker with a perfectly-weighted grubber to make it 18-12.

After an error-riddled night, it looked as if Joe Burgess had redeemed himself with a spectacular solo effort from halfway, but after initially being sent upstairs as a try, the Bunker ruled that the Englishman's fingers had come off the ball as he tried to ground it.

That would prove to be the straw that broke the camel's back as another penalty goal to Lyon pushed the lead back out to eight to seal Manly's third win in as many matches. 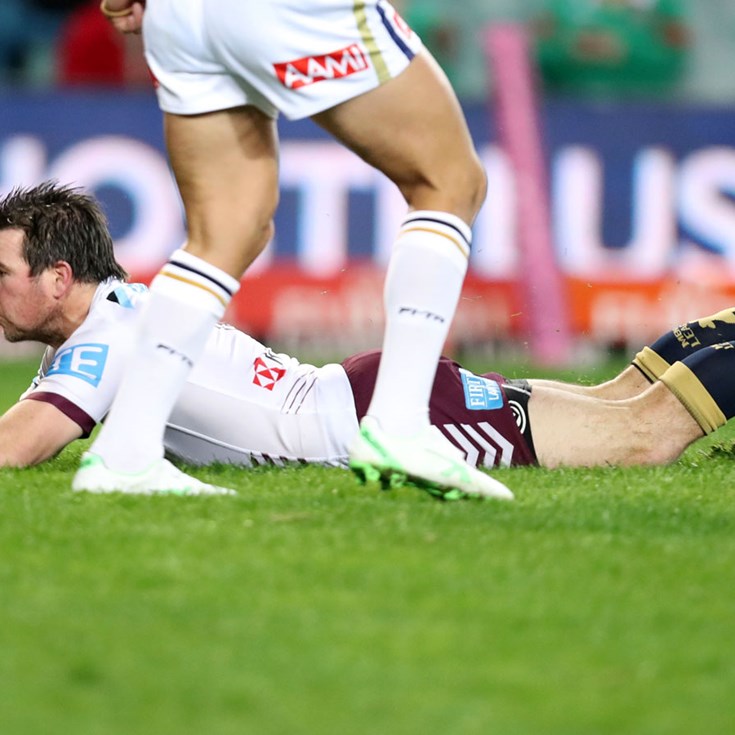