The Sea Eagles return to Brookvale Oval for the first time in a month to take on the cellar-dwelling Newcastle Knights in Round 21 of the NRL Telstra Premiership.

Manly have collected maximum points since their last game at Fortress Brookie with their big Round 17 win over the Dragons sparking a run of winning form.

Injured Taufua drawing inspiration from Matai
I was always headed to the back row: Green
Knights salute Josh King with new NRL deal

Having beaten the Warriors (in golden point) and the Rabbitohs since, an unchanged Sea Eagles line-up will line up against a Knights side playing to avoid their equal-biggest losing streak.

The Knights will welcome back Jake Mamo and Daniel Saifiti from suspension for this one. However the blows keep on coming with veteran Jarrod Mullen (hamstring) and Mitch Barnett (suspension) unable to play.

Jack Cogger and David Bhana have been drafted into the Knights' 17 at five-eighth and in the back row respectively.

Watch out Sea Eagles: Dane Gagai's shift back to his preferred position of centre for the first time since Round 3 can only help the Knights in their quest to prevent a 13th straight loss. He'll face off with Lewis Brown who's similarly been used in multiple positions this season. Gagai's amazing State of Origin series in Queensland's three-quarter line means he won't be overawed by his centre return, in what will also be his 100th NRL game.

Watch out Knights: Daly Cherry-Evans had an uncharacteristically quiet game against the Rabbitohs last Monday night. The Sea Eagles halfback needs to stand up as his side look towards an unlikely finals berth. Manly have scored the majority of their tries (12) in the 50-60 minute mark in games this season. That stat is fraught with danger for the Knights – especially if Cherry-Evans is on song – due to the likely wooden spooners conceding a whopping 19 tries in that same timeframe.

Key match-up: Tom Trbojevic v Jake Mamo. Mamo's chances have been limited this season due to a nagging syndesmosis complaint but he showed enough in his last game back in Round 19 against Melbourne that he's in the NRL to stay. Trbojevic has been a diamond amongst the rough for the Sea Eagles this season. With usual fullback Brett Stewart ruled out for the season with a knee injury, Trbojevic has taken over the No.1 jumper and proved why he'll make it his own in future seasons.

What are the odds: While Manly are heavily favoured, and expected to win the game, Sportsbet punters are keen on the Knights at the line where they're receiving a generous start. Manly 13-plus is the way the money is going in the winning margin market. Latest odds at Sportsbet.com.au.

The way we see it: Manly are four points outside of the top eight – so if they lose to the Knights their season will be effectively over. Any team the Knights beat next will be viewed as one of the upsets of the season, but unfortunately for them it won't be this weekend. The Sea Eagles' desperation for finals footy will outdo anything the young Knights will produce. Sea Eagles by eight points. 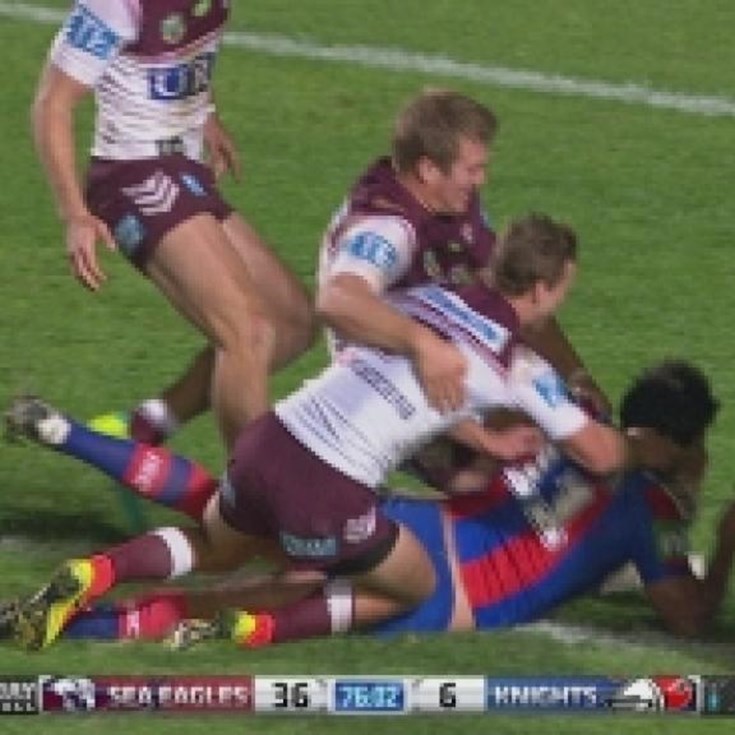