The Manly Sea Eagles remain in finals contention following their 36-16 win over the Newcastle Knights at Brookvale Oval on Sunday afternoon. The Round 21 Telstra Premiership clash saw the Novocastrians fall to their 13th straight loss.

Sea Eagles back into finals conversation

There's a logjam of teams in and around the top eight still vying for a finals position but don't discount the Sea Eagles just yet. Coach Trent Barrett's outfit sit at 11th and are just two competition points out of the top eight. Their 20-point win over the Knights was their fourth-straight and was built off the back of a 26-0 half-time lead. Barrett wasn't pleased with how his side performed in the final half hour and refused to shift any focus towards finals football.

"We're still hanging around but there's still a long, long way to go. We're getting there though. The past month has been really good but the finals aren't the focus," he said.

"Next week is the focus and I think we all have some things in our games individually that we can all improve on."

The parallels between the Knights' 13-game losing runs of 2005 and of 2016 are few and far between but they all read the same on the record book. Five-eighth Jarrod Mullen played part in both streaks but that's just about where the similarities end. The Knights faced a horror injury toll 11 seasons ago where the likes of the Andrew Johns and Danny Buderus were struck down. Currently the Knights' inexperience is having its say: Knights coach Nathan Brown forced to name eight players aged 22 or younger as well as 23-year-old back-rower David Bhana against Manly.

"We have come into this job with our eyes open. We knew it was going to be tough for a period of time," Brown said post-game.

"We'd love to win some more games obviously but we have shown progress when we have the right players out there. At different stages in different games, the young kids are making progress too."

Trbojevic the new Prince of Brookvale?

A double century of metres, two try assists, six tackle breaks and a line break – it's fair enough Manly fullback Tom Trbojevic was named Man of the Match. It didn't stop his coach from trying to protect his young prodigy though.

"Tom's a byproduct of what's going on around him. He's going really well. But he's only young. We see it so often that we put so much pressure on these young blokes. He's 19," Barrett said.

"We'll protect him as much as we can and let him develop. He needs that. We have to do the right thing by him and let him come along slowly. He's a good player, there's no doubt about that but we have a responsibility to shield him though and we will."

There was no better moment to highlight Martin Taupau's best Sea Eagles performance ever than the treatment he afforded 18-year-old Knights playmaker Jack Cogger. In the final eight minutes, Cogger slipped over after receiving the ball from a scrum. Most defenders would complete the tackle by placing a hand on the prone player. Not Taupau. The Kiwis international instead smashed Cogger back to the turf. Taupau and fellow front-rower Darcy Lussick combined for 424 metres and nine tackle breaks against the Knights.

One positive Newcastle may find is that they got through their loss to Manly unscathed. A month ago the Knights looked likely to end their losing run as their casualty ward began to empty. Yet their loss to the Storm a fortnight ago saw the Knights handed four cruel blows. Jake Mamo and Daniel Saifiti were suspended, Sione Mata'utia broke his jaw and Robbie Rochow (pectoral) was ruled out for the season. Against the Sharks last weekend, their woes extended to veteran Mullen (hamstring) and Mitchell Barnett (suspended).

"If we kept the same side on the field these past two weeks and had Mullo there, there'd be no doubt we would've competed better," Brown said.

"It's just tough at the moment." 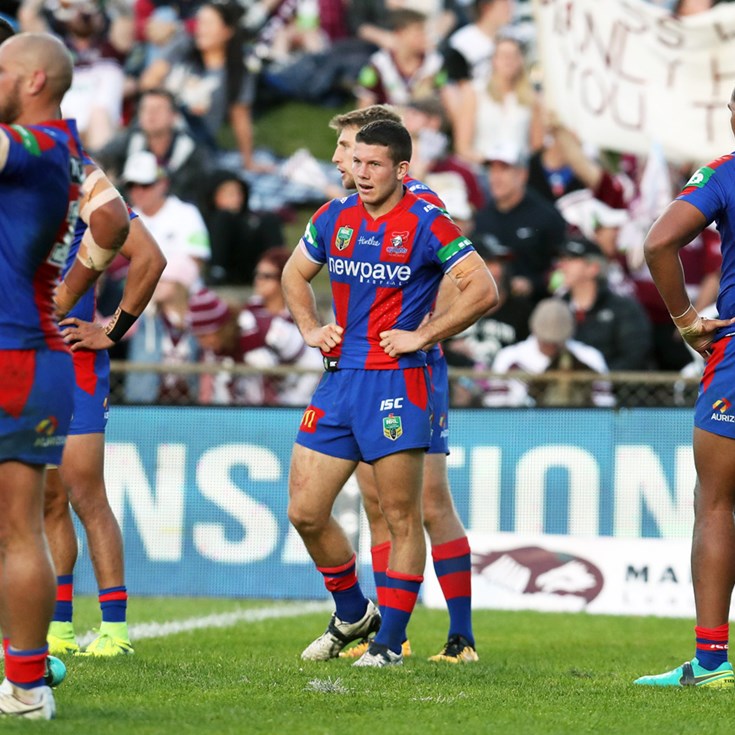 Buhrer puts a painful run behind him