Cronulla's 15-game winning streak has come to an end in the most extraordinary fashion, fighting out an 18-all draw with the Gold Coast Titans at Cbus Super Stadium on Monday night.

The Titans fought back from a 12-0 deficit to lead 18-12 15 minutes into the second half before an Andrew Fifita try saw the Sharks draw level 10 minutes from full-time.

James Maloney and Ashley Taylor traded field goal attempts in the final five minutes of regular time without success and neither team could land the killer blow in 10 minutes of extra time in front of an enthralled crowd of 14,918.

The Sharks had the best of the chances in the first period of extra time with a Maloney attempt hitting the left crossbar after four minutes and Chad Townsend and Ben Barba also having unsuccessful shots at the match-winner.

Maloney hooked his third shot left of the posts two minutes into the second stanza, Ashley Taylor had an attempt charged down, Konrad Hurrell was held up over the line and Taylor shanked a final shot as almost 15,000 fans sat glued to their seats.

A frantic final 10 minutes of regular time followed an Andrew Fifita try in the 70th minute as the two exhausted combatants looked for a way to break the deadlock.

The Titans were in position for a third shot after an error by Michael Ennis but inexplicably ran it on the last rather than getting Taylor in position for a third shot before the 80 minutes expired. A Maloney shot six seconds from the end was also disallowed when referees ruled that Valentine Holmes had been grounded in the tackle before offloading.

The Titans went into the match without a recognised hooker after the withdrawal of Nathan Peats with a hamstring strain and conceded errors early to allow the Sharks to take early control.

Tries to Holmes and Jack Bird allowed the visitors to shoot out to a 12-0 lead after 30 minutes and with Titans fullback David Mead in the sin-bin for a professional foul.

The Gold Coast fightback began five minutes from the end of the first half and went until the 90th minute when Josh Hoffman dived on a kick infield from Holmes as Townsend pushed through looking for the match-winner in the final play of the game.

Six minutes of to-ing and fro-ing to open the game was broken when Luke Douglas was penalised for a high shot on Matt Prior and three tackles after the restart struck through Holmes, who finished a superb shift to the right for his sixth try in just four games against the Titans.

Only a desperate tackle from Wade Graham and Ben Barba prevented Titans back-rower Chris McQueen from scoring in the 12th minute and then an error from Douglas on play one 20 metres out from the Sharks' line in the 16th minute cruelled another opportunity or the home side.

McQueen was again heavily involved when he dragged Barba back into the in-goal following an Ashley Taylor bomb, the Bunker confirming referee Bernard Sutton's suspicion that the ball came loose courtesy of McQueen and denied Taylor's claims for a try.

The Sharks were able to extend their lead to eight points with a penalty goal in the 27th minute and after Titans fullback David Mead was sin-binned for a professional foul Cronulla went further ahead courtesy of a perfectly-timed Barba pass for Jack Bird to cross wide out.

Struggling to keep pace with a Sharks team looking for a killer blow prior to the break, the Titans had their first piece of good fortune when Sosaia Feki spilled a cross-field bomb from Taylor and McQueen was on hand to ground the ball in the in-goal and bridge the gap to six points.

Paul Gallen was held up five minutes into the second half under the posts but after Tyrone Roberts nabbed a Ben Barba grubber 10 metres out the Titans went 90 metres to earn their first repeat set of the night via a clever kick from Cameron Cullen close to the line.

Pressure turned into points from the next set with Mead slicing through on an exquisite short ball from Roberts who converted from 10 metres in from touch to level the scores seven minutes into the second half and bring up 500 career points in the NRL.

Riding a wave of possession and momentum, the Titans hit the front in the 55th minute when Anthony Don gleefully accepted a flick pass from Konrad Hurrell that would have done Matt Gidley proud with Roberts' sideline conversion making it 18 unanswered points in the space of 20 minutes.

An audacious chip-and-chase from Chad Townsend in 70th minute and second kick earned a repeat set for the Sharks and from a subsequent penalty Andrew Fifita powered through an exhausted Titans defence to score under the posts and level the scores at 18 apiece seven minutes from full-time. 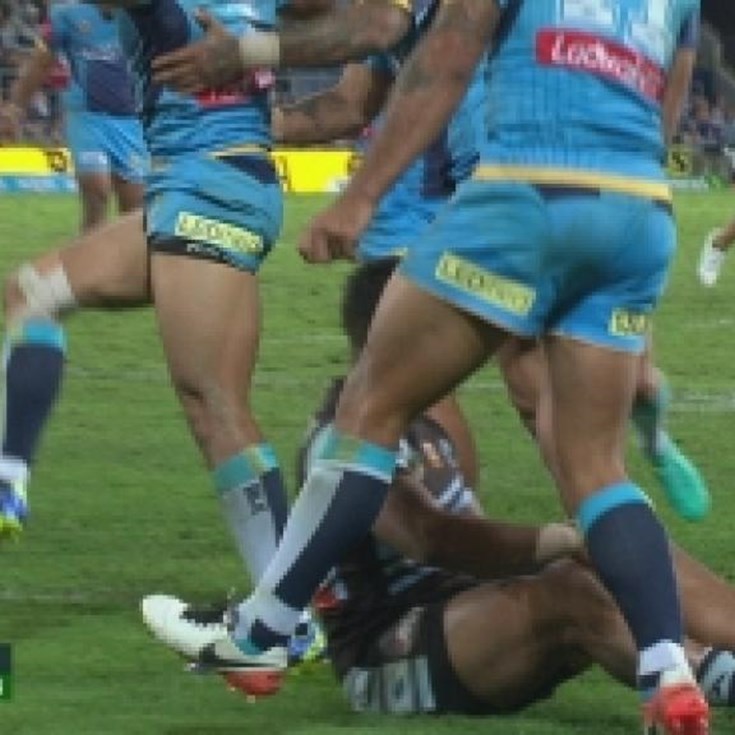