A tantalising match-up between the two teams fighting to stay in the top eight has been elevated to super galactic status by the mere prospect that Jarryd Hayne will play his first game for the Titans this Sunday at Cbus Super Stadium.

With the Warriors traditionally strong drawers on the coast Titans officials were confident of a crowd nudging the 20,000 mark on Tuesday and were dusting off the 'House Full' sign shortly after the Hayne unveiling on Wednesday morning.

We may have to wait until an hour before kick-off for confirmation of whether Hayne will play – and in which position – but the indication from coach Neil Henry on Wednesday that if he was medically fit to play, the Hayne Plane would be cleared to take off.

For a team with battered bodies but renewed confidence having taken the premiership leaders to 90 minutes on Monday night the Hayne signing is another shot in the arm for a team fighting to play finals football for the first time since 2010.

By rushing Hayne into the line-up Henry could jeopardise the fluency with which his team has been playing in recent weeks but the decision will likely come down to whether the positives of his inclusion outweigh the negatives.

It throws another interesting sidelight into a contest that already promised to deliver something special.

Konrad Hurrell up against his old team for the first time; Agnatius Paasi fired up to face the club that dumped him; Tui Lolohea motivated to make fullback his own and Nathan Peats and Issac Luke going head-to-head in the middle of the ruck.

The Warriors have gone to golden point in four of their past five matches and have discovered mid-season the battle-hardened edge needed to be considered a serious premiership contender.

With so much noise now surrounding this fixture, the team that keeps their head may be the ones who take a crucial step towards a finals berth.

Watch out Titans: What has been a strength in recent weeks for the Titans has the potential to be a weakness this week with the Warriors boasting a giant three-quarter line that is also good in the air. Nene Macdonald has been terrorising opposition wingers with his own aerial ambushes but comes up against his physical equivalent in Warriors monster Ken Maumalo. 'The Beast' Manu Vatuvei is on the left wing and David Fusitua has shifted into the centres where he scored two tries against the Panthers last weekend. The Titans have looked frail on the fringes and the Warriors have more than enough strike-power to expose it out wide.

Watch out Warriors: Jarryd Hayne's back? On the off chance that he is held back a week the Warriors should shift their focus to the power that's coming off the Titans bench, including two former Auckland boys who would love nothing more than to get the better of their countrymen. Sharks skipper Paul Gallen made mention of the impact Agnatius Paasi and Leivaha Pulu made when they came on last Monday and with the Titans back row of McQueen, Taia and Bird able to play big minutes, coach Neil Henry can use their power runs to maximum effect. When Paasi pushes off the back fence to take a hit-up his teammates and crowd respond accordingly and with the Warriors defence most susceptible late in each half, that bench rotation will be key.

Key match-up: Konrad Hurrell v Solomone Kata. Like putting two bulls in a phone booth and waiting to see which one comes out, this match-up will be one where both players look for individual dominance in order to contribute to the fortunes of their respective teams. Having been disregarded by Warriors coach Andrew McFadden as an option in the centres Hurrell has been a revelation in his three most recent games for the Titans, running for an average of 186 metres per game with a total of 11 tackle-busts. But Kata is no slouch either, tied for ninth in tackle busts in the NRL with 82 and with 10 tries to his name. Forget the footwork, these guys are going at each other head-on.

History: Played 19; Titans 7, Warriors 12. It's been all the Warriors since 2011 with 10 wins from 11 meetings including five on the trot at Cbus Super Stadium. The Titans' last win against the Warriors at home came in the 2010 finals series when more than 27,000 fans turned out to see Gold Coast triumph 28-16 and earn a preliminary final shot against the Roosters. Warriors half Shaun Johnson has only ever lost once against the Titans and has amassed nine tries, 23 goals and two field goals for a total of 84 points in 10 games against Gold Coast.

What are the odds: Titans $1.55, Warriors $2.50. Sportsbet has struggled to take a bet on the Warriors ever since Jarryd Hayne was announced as a Titans player, with 95 per cent of the money going on Gold Coast in the past 24 hours.  Seventy per cent of all bets on first try-scorer have been on Hayne at $11, despite the fact that he's likely to start from the bench. The star recruit is also the most popular player to score two tries or more at $6.50, and also three tries or more at $26. But the safest bet according to punters is $2 for Hayne to score a try at any stage of the game, with no real money for anyone else. The Titans have firmed from $1.70 into $1.55 to win the game since Hayne's signing. Latest odds at Sportsbet.com.au.

How we see it: Along with the Sharks-Raiders clash this is the match of the round. The prospect of Gold Coast's biggest crowd since Round 5, 2013 and Jarryd Hayne returning to the NRL will ensure an electric atmosphere and inspire two desperate teams who both went extra time in Round 21. The Warriors' record on the Gold Coast is imposing but momentum is building around the Titans after their draw with the Sharks on Monday night. An absolute belter, Titans by four points. 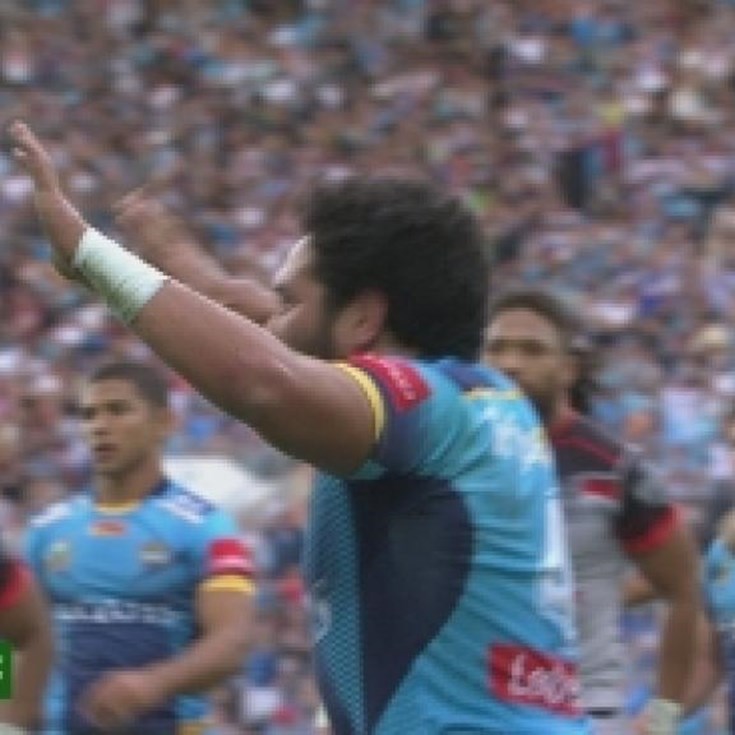