The Eels edged a low scoring thriller at Pirtek Stadium, winning a one-try-apiece affair 10-9 with the help of a couple of penalty goals.

A double celebration for Eels

There has been no shortage of negative headlines for Parramatta this season but Friday night brought a double dose of good news: not only did the team get one over old rivals Manly but they got a huge game-day boost with news coach Brad Arthur had re-signed for an additional two years.

Arthur has been an absolute rock for the club in a season of turbulence and the job he's done to keep a playing group devastated by injuries and other departures not only switched on but still scraping out wins is nothing short of remarkable.

The Eels' early-season highs were a sign of what Arthur will be able to achieve when things are going well and his retention should be celebrated by blue and gold fans.

Arthur described the new deal as an easy decision.

"I love the club and I love this playing group and we're all in it together," Arthur said.

"It doesn't look great from the outside but trust me it's a good strong playing group and they're all very happy here, they love coming to training, I love my job and I wouldn't change it for anything."

Captain Beau Scott joked that when Arthur called the group together before the game he thought it would be say he had decided to leave.

"Brad informed us before the game and honestly I thought it was going to go the other way, I thought he was going to tell us he was leaving!" Scott laughed.

"It was great news to hear before the game and obviously a bit of a positive news at the end of the week. We put in a good performance tonight, we can enjoy it tonight and enjoy Brad's future."

With the Sea Eagles clinging onto a slender 9-8 lead with under five minutes remaining, one penalty ruling changed the course of the match.

A disorganised right-side shift from the Eels, with players bunched together, saw a poor pass knocked on as one of the bunched-up players was taken out on suspicion by Manly forward Marty Taupau.

After an initial knock on call, the sideline official ruled the hit from Taupau was illegal and a tough 40-metre penalty goal attempt from Michael Gordon put the Eels up by a point – an advantage they were able to retain through to full time.

Manly coach Trent Barrett did not try to contain his dissatisfaction with the ruling in his post-match press conference.

"You see a thousand of them every week. It wasn't high, it wasn't a shoulder charge, the two referees saw it okay, to get a call from a touch judge that'll decide a game and possibly our hopes of making the semis, is hard to take," Barrett said.

"You'd hate to see a grand final decided like that."

Manly skipper Jake Trbojevic agreed it was hard to stomach after leading for most of the second half.

"It wasn't our best performance but I thought everyone really had a dig and really worked hard. Tough to lose like that," he said.

"The ref said knock on, so we were happy to get the ball back. And then the touchie said late contact or shoulder charge, one of them. It was pretty disappointing for the call to get overturned and cost us the game."

Eels continue to make do in face of injuries

It wouldn't be a Parramatta game in 2016 unless Arthur finished with fewer than four fit players on the bench, and so it was again on Friday night.

Boosted by the returns of Scott, Michael Jennings and Manu Ma'u, Arthur first saw Mannah sent for a concussion check then a high shot from Josh Starling in the second half meant Tepai Moeroa also had to go for a head injury assessment. Unlike Mannah, Moeroa failed the check and finished the game early.

Scott joined him on the bench in the 72nd minute after hobbling off with an ankle injury and fronted the post match press conference with his left ankle iced – though his self-assessment was that it was "not too bad".

"That's been pretty common throughout the year," Arthur said of the injuries.

"Boys have been thrown all over the shop for a while now so they just respond and respond positively and hang on for each other."

Coming up against his old club, the always fiery Darcy Lussick was in no danger of having a quiet game.

The 27-year-old has been in career-best form of late and was always going to aim up against his former teammates. But even by his standards things got testy early.

A bit of to-and-fro with Eels captain Beau Scott led to a talking to from the refs (mostly towards Scott, to be fair) inside of two minutes. A huge collision with Tim Mannah saw the Eels prop sent for a concussion test.

A belligerent opening 20-minute spell behind him, Lussick took just 11 minutes to cool his heels before being reinjected with almost 10 minutes of the first half remaining and all in all he finished up with 141 metres and 25 tackles to again be one of his team's best – a label he has worn with regularity in recent weeks.

Four straight wins to Manly had fans believing a late, unlikely finals charge was on – but the team could ill-afford a loss on Friday night.

Even with four wins from their final four matches would only get them to 28 points with no guarantees of getting through, given their current -41 points differential.

"Yeah it is [tough to make it now], we've got to win next week against the Dogs and then we've got two home games. So massive focus on that Dogs game and get a big crowd back at Brookie into Melbourne and Canberra," Barrett said. 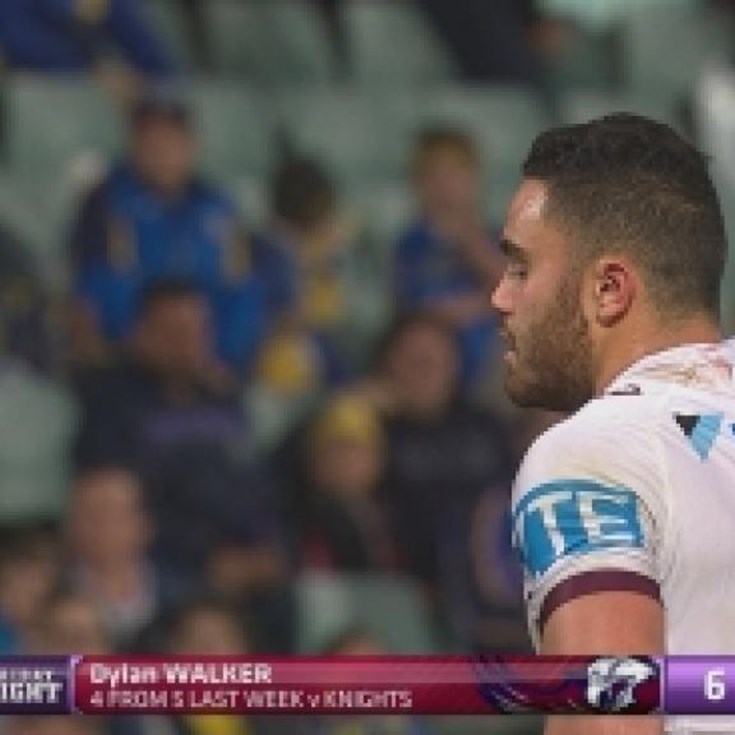