A cold-as-ice field goal from Jarryd Hayne eight seconds from full-time has snatched an impressive 19-18 win over a Wests Tigers side that may have lost star fullback James Tedesco for the season.

Ryan James will face a nervous wait for his 60th-minute swinging arm that forced Tedesco off with a suspected broken jaw but the headline act was Hayne's stunning last-gasp match-winner.

Hayne had a fine afternoon punctuated by a couple of errors, playing his first ever NRL game at the Campbelltown Stadium just up the road from where he grew up at neighbouring Minto.

The Titans at one stage looked on track for a comfortable win before a late David Nofoaluma double locked up the scores with just under 10 minutes to go. Mitch Moses' conversion sailed agonisingly close before bouncing back in off the left-hand upright and dropping just to the wrong side of the cross bar.

Moses also missed a penalty goal shortly after for another high tackle penalty from James on kicker Littlejohn but that tricky 73rd-minute attempt also missed. He and Titans half Ash Taylor traded missed field goals until the ball landed, inevitably, in the hands of Hayne for an all-or-nothing play with seconds on the clock.

The former San Francisco 49er raised both arms in triumph and yelled "this is my house" as he was swamped by teammates in a result that keeps the Titans' finals hopes alive and crucially pushes them past the Tigers on the ladder to 25 points – and temporarily at least – to seventh on the ladder pending results for Penrith and the Warriors this weekend.

The day started nightmarishly for the Titans with a scrappy piece of play featuring several knock-backs saw James Tedesco swoop onto the ball and send Kevin Naiqama on a clear run to the line for a try after 51 seconds of play.

It would prove to be the home team's only try of the half though they added two penalty goals – but overall it was a below-par return (as well as a credit to Gold Coast's defence) given the Titans were forced to drop out three times in the half as well.

Hayne's day also started poorly – his first involvement was a bomb that floated wide into touch on the full while he also fumbled a kick at his line that could have led to a Tigers try had Nofoaluma not knocked on in trying to score.

He made amends later in the half with a 50-metre intercept run from a Moses offload and a much better bomb laid on the Titans' second try when Anthony Don stepped blocker Tim Simona to outleap Jordan Rankin and grab the ball.

That try – in the 37th minute – was the one that earned the Titans the lead for the first time in the game and came a couple of plays after Josh Hoffman was lucky not to be penalised for knocking the ball out while Josh Aloiai tried to play in near his own line.

The Titans' first two tries (all three first-half tries remained unconverted) came in the 20th minute off the back of Hayne's intercept when Don was on the end of a spread out wide and in the 28th when Hoffman raced in off a deft Taylor grubber.

The Titans lost Greg Bird early in the second half to a shoulder complaint and were lucky to dodge a try when the bunker found obstruction on Dave Shillington as Moses put Littlejohn over.

Next points instead came via a length-of-the-field intercept try to Nene McDonald from a Tedesco tap-on to stretch the lead to 18-10.

But a powerful Nofoaluma double in the 65th and 70th minutes – both agonisingly unconverted left the scores tied before a flurry of missed field goals and penalties set the scene for Hayne's big moment. 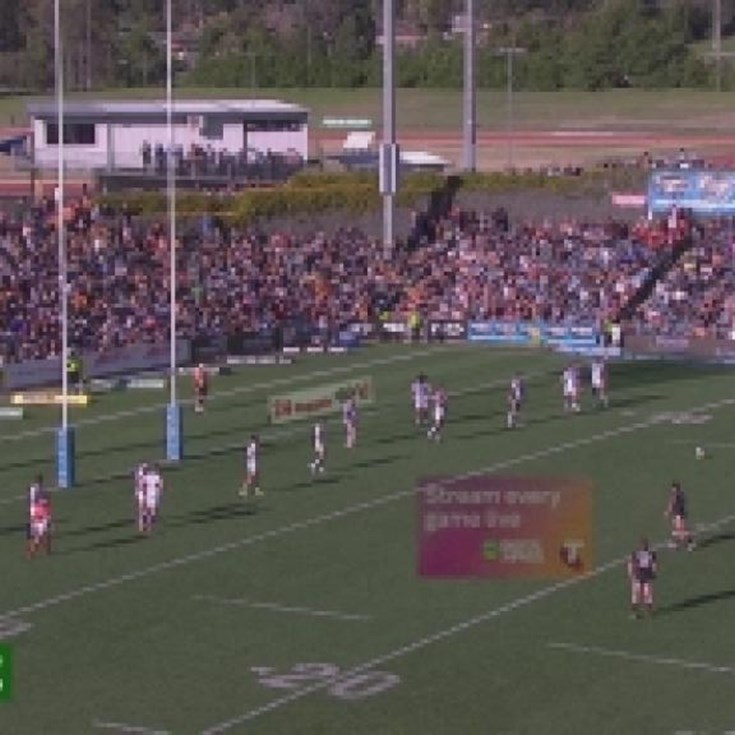